After a drawn Test series in England, one of our respected forum members takes a look at the positives and negatives to take into consideration from the series moving forward. 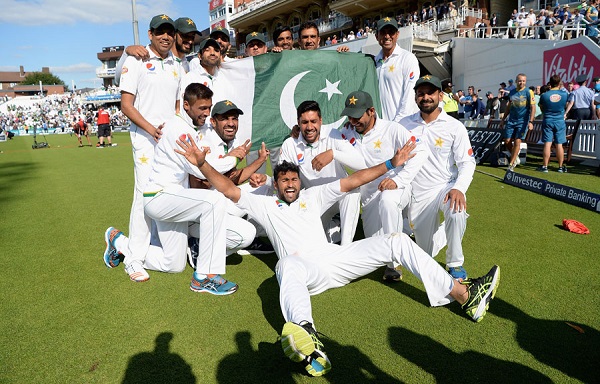 Flamboyance, mercuriality and swagger: traits that define and resonate with Pakistan cricket of the past, are as much of an epitome of its sporting history as anything that might equally define its embodiment. Contrastingly, however, the last half decade has seen Misbah, Pakistan’s most successful Test captain to date, pummel opposition after opposition, without mercy I might add, and yet play a brand of cricket that is most alien to its very own residents.

‘The Misbah Grind’, a term that puts the fear of God into the opposition batsmen, is a technique used to inflict such a damaging asphyxiation that you either buoy with helplessness or choke on your own aridity while disappointingly heading back to the Pavilion.

These are the tried and tested ‘desert’ tactics that Misbah has been employing all throughout the English summer and at the end of it all, Pakistan head back with the Test series levelled at two apiece. For most Pakistanis in general, obtaining a draw against an inspired English side, that too in their own den, who very recently hammered the South Africans in away conditions is a massive positive.

The victory at Lords and at The Oval ensures that Pakistan can once again start believing in their abilities to compete with the very best and to be a dominant cricketing force even outside of their comfort zones – this drawn series, a feat achieved on 14th August 2016 (Pakistan’s Independence Day I might add) is special in itself as it was the second time only, since 2008, that a visiting team in England managed to avoid a loss in a series having played 4 games or more.

With everything said and done however, there is much to learn from this tour which can periodically ensure that Pakistan does well for its upcoming summer series Down Under and to compete at a level that may further make this team go from strength to strength.

Starting off, we can all most definitely agree that the Pakistan Cricket Board isn’t the ideal personification of a professionally run body but what is extremely commendable is how the administrators, selectors and other individuals came together to spark one of the most battle hardened preparatory courses ever seen in recent times for this English Tour. From making the players go through an army boot camp to using Duke Balls in the nets, all associated specifics to this tour were chosen with absolute care. The lads were sent almost a month in advance to acclimatise better and there were two side games before the first Test at Lord’s.

The Lord’s Test initiated in a similar fashion as how we’ve seen Pakistan play over the years. The openers were dismissed for not so high a score and the middle order came in to settle more (fan’s) nerves rather than score runs. It was disappointing to see Azhar not kick on from a start while Younis’ hopping around looked absolutely God awful for all money. However, what defied that English attack was the resilience of a man out there to prove a point, to prove to his detractors and critics that this Pakistan team were not a mere one trick pony who can only play in the UAE. Playing his first ever Test innings in English conditions, Misbah brought up his 10th ton by nudging Steven Finn to backward point and entrenched his name in history books and on the honours board forever.

Playing at Lord’s first up further allowed Pakistan to enthral their entire arsenal of tricks. With Yasir Shah bowling on a wearing Day 4 pitch and the square a bit dry, Wahab Riaz and the Messi doppelganger well and truly came into their own. The leg-spinner grabbed a career best 10-fer while Riaz bowled a lightning spell that had vintage Pakistani reverse swing written all over it. This match was also “the redemption game” for Mohammad Amir who despite modest match figures bowled with a fair amount of heart. At the end of it all, Pakistan managed to pull off a sensational win sealing the game with a historic 75 run victory and going one up in the series.

The teams then moved on to Old Trafford, Manchester where Pakistan coming at the back of a motivating win, shelled the initiative in an extremely Pakistani like manner by conceding near 600 runs in the first innings of the match. It was spectacularly peculiar of how flat, all of a sudden, the entire team went, as if the emotional drain and the push up celebrations at Lord’s had zapped the living daylights out of everyone.

The majestic Joe Root, England’s premier one down batsman and second only to Alastair Cook in terms of runs scored, amassed a tally of two hundred and fifty runs individually. The Pakistani bowlers had no answer to his exploits and near the end of the innings it definitely seemed that the innings was at the mercy of the English and when they would finally decide to declare. In addition to this, captain Cook tallied another international century while there were two fifty-plus scores from Woakes and the wicket-keeper Bairstow respectively.

Pakistan’s 1st Test hero Yasir Shah was thumped for over two hundred runs while going almost 4 runs per over. The only positive, and I am not too sure if we can actually call it that, was Amir bowling 29 overs while going at a decent 3.06 runs.

Due to the massive hammering received in the first innings, Pakistan were always playing catch up in the entire game. The scoreboard pressure and lacklustre bowling discipline and ensured that the game was done and dusted by the end of the third day. Unsurprisingly, Pakistan finished second best by a deficit of 330 runs; with their batters out of sorts and lead bowlers pummelled into the ground, things were looking rather ominous.

A week long break between the second and third Test provided Pakistan with an opportunity to try a few variations in their line-up by playing a two-day game against Worcestershire. Although the game was eventually drawn as you can hardly do much in a two-day game, it marked the re-entry of Sami Aslam and Sohail Khan into the Test side. Sami made a not so very impressive 17, striking at only 29.82 but his selection over Shan Masood in the final XI proved to be a master stroke in the grand scheme of things.

The Edgbaston Test in Birmingham saw Pakistan skittle England out for 297 on Day 1 with Sohail bagging a five-for in his return to the Test side after a break of six long years while the batsmen accumulated an exact 400 on the board. Azhar Ali finally managed to defy the demons in his head and racked a pivotal hundred while constructing a beautiful partnership with the returning Sami Aslam, who himself scored the most English 80 runs ever seen by a Pakistani opener since Saeed Anwar in 1996.

There were, however, a few disappointments in the batting charts as Younis still was batting as if he was standing over a pit of burning charcoal while Asad got comprehensively castled by Stuart Broad for an eighteen ball duck. With a lead of a hundred, approximately, the odds were massively in favour for Pakistan to stage an upset where the English were unbeaten since that famous Ashes win way back in 2005.

It was at this point that Pakistan actually got to experience the true resilient nature of this English line-up and the reason why they are considered a massive threat in their own conditions. Alex Hales (who had so far been a walking wicket in front of Amir and Rahat) along with the English skipper racked up 120 runs in a single evening session without any loss of wickets. It nullified whatever lead Pakistan had earlier and additionally tallied an English lead of 17 runs. By the end of Day 4, Cook, Hales and Root had all notched up 50+ scores individually while the first session of Day 5 saw Bairstow and Moeen Ali reach 80 odd runs each respectively.

A target of 342 was set up, by England while giving their bowlers a little over two and half sessions to try and make a game of it by the end of the day; and make a game of it they did. Anderson, Broad, Woakes and Steven all came charging, throwing in the absolute full Monty in their attempts to obtain a favourable result for the English. Majority of the people looking at the scores made all throughout the five days, were probably foreseeing a tame draw but with Pakistan in self-destruct mode and the opposition going through an inspired spell, the batting order spectacularly collapsed from 79/1 to 125/7.

The middle order had no less than a nightmarish time, as at one point in the innings, four wickets were lost for the addition of a single run. Asad Shafiq, who was rated quite highly by critics and fans alike bagged a pair and the flamboyant Sarfraz was also sent back to the pavilion for a duck. Despite a late 50 runs partnership between Rahat and Sohail, Pakistan were bundled out for 201 and lost an extremely important Test by 141 runs. This sad result at Edgbaston meant that Pakistan were going into fourth and final Test of the series 2-1 behind England and could only save the series if they won.

Many believe that Pakistan play their best cricket when their backs are up against the wall and while coming into the series with a 2-1 deficit plus a do or die situation to keep from a series defeat, Pakistan roared in the true spirit of the cornered tigers at The Oval. The fight in the final duel at London saw both teams go tooth and nail for the first two days but it was a Younis Khan master class, an unprecedented double century that absolutely sealed the game and helped Pakistan draw level.

The score-line had a very pleasing century from Asad Shafiq who came of age at his new #3 position in the batting line up whilst in the bowling department both Sohail and Yasir bagged a five-for each in the 1st and 2nd innings respectively.

With the English summer coming to a close, Pakistan have much steeper and more challenging assignments yet to come their way in the next six months. The tenacity of this team and whether they can handle more varying degrees of surroundings will be scrutinised much further in the upcoming tours of New Zealand and Australia.

However, at this moment in time, it should be more than established that this team, THE MISBAH XI, are probably one of the grittiest set of players to ever don the star and crescent. The attitude of going till the very end and not flagging is a breath of fresh air as opposed to how our teams from the 90s and 2000s used to falter. In the end, Misbah’s comments in an interview done by Simon Mann (BBC Radio Broadcast) embodies the above characteristics perfectly, as he said “The way the boys fought hard [and came back] after the defeat at Manchester and Edgbaston really shows the character of this team”.