PSL 2019 review: What did the PSL teams do well, and where did they fall short?

After 32 days of action-packed cricket, the PSL ended in the City of Lights with the Quetta Gladiators triumphing over the Peshawar Zalmi. Despite Islamabad United’s two PSL titles, the Gladiators have been the most consistent team in the short history of the PSL. As we recap the PSL 4 it is a great time to recognize the reasons behind their success, while more prominent franchises continue to underachieve. 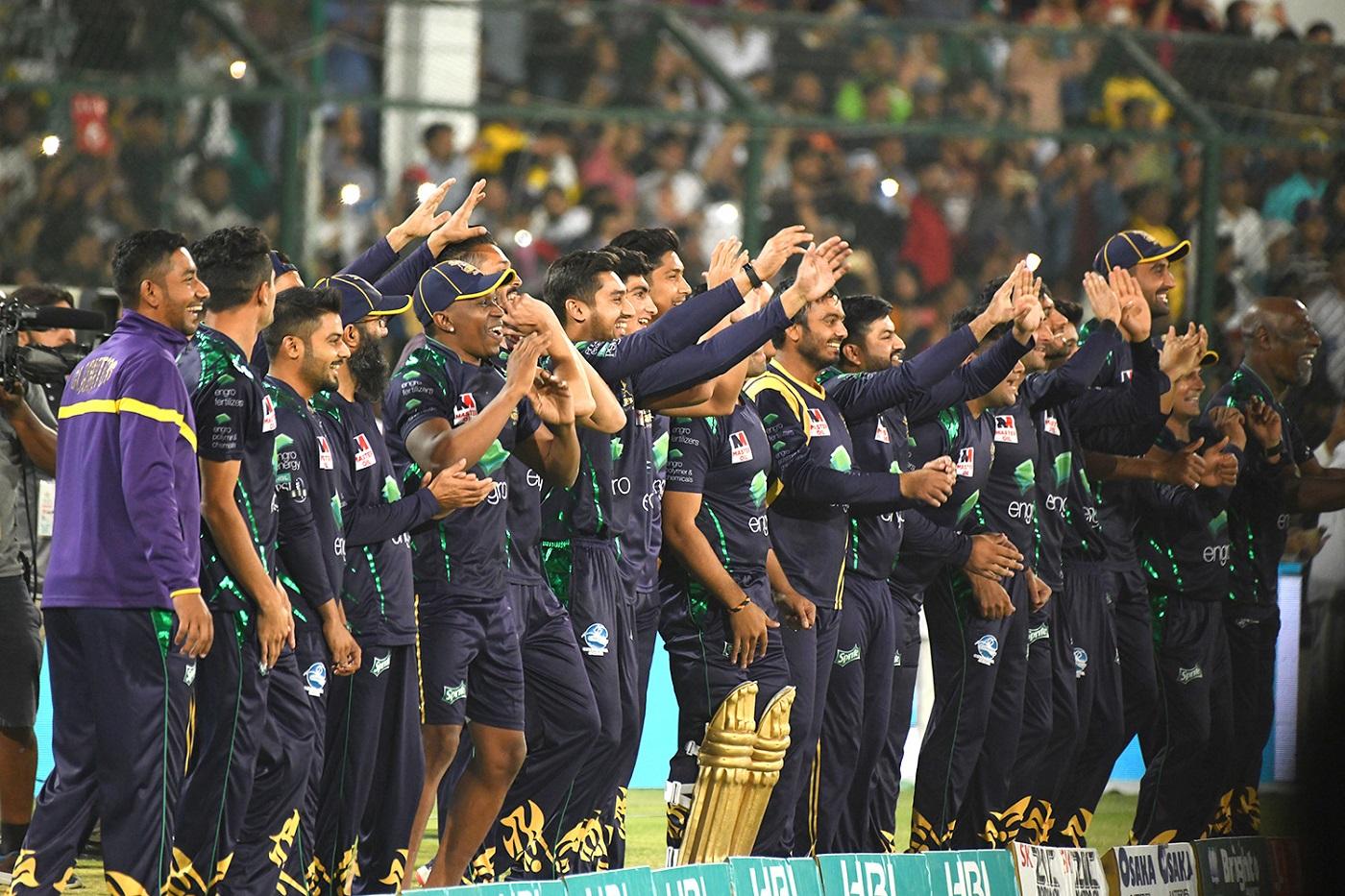 The Gladiators are emblematic of winning teams across sports. In Nadeem Omar, they have an excellent Owner who understands the Game and Business of Cricket. In his 4 years as Owner of the Quetta Gladiators he's maintained a core leadership structure at the franchise of Sarfraz Ahmed, Moin Khan, Viv Richards, Azam Khan, and Nabeel Hashmi. Along with retaining and trusting that core, the Gladiators acquired three players during the off-season who turned out to be game-changers. They acquired Fawad Ahmed and Mohammad Hasnain in the PSL Draft. They traded for Umar Akmal and Sunil Narine in exchange for Hassan Khan and Rahat Ali. Despite Narine's injury, it was a one-sided trade. Akmal rewarded the faith of the Gladiators management by averaging 34.62 with a devastating SR of 137.12.

Fawad Ahmed and Mohammad Hasnain made a big difference. After years of hitching their wagons to bits and pieces cricketers like Mohammad Nawaz and Anwar Ali, the Gladiators finally added decisive pace and mystery leg spin. Ahmed was a star from the very beginning, but it was the inclusion of Hasnain after 4 games that elevated the Gladiators to title contenders. A dynamic bowling attack was supplemented by a consistent batting led at the top by Shane Watson and in the middle by Umar Akmal. As the Tournament Progressed, the Gladiators also received good performances from Ahsan Ali and towards the back end from Ahmed Shehzad. In the end they were the best team and deserving winners.

Like the Gladiators, the Peshawar Zalmi have been the second most consistent team in PSL History. Led by Darren Sammy, Peshawar have won 1 PSL Title and made 3 Finals. After another solid league campaign, we expected Zalmi to put up a better fight in the final. Unfortunately for them, it was a step too far as their lack of balance was exposed. Despite trusting the likes of Mohammad Asghar and Ibtisam Sheikh in earlier campaigns, Sammy and Mohammad Akram relied on a strong quartet of pace bowlers led by the outstanding Hasan Ali and Wahab Riaz. Unfortunately for Zalmi, the lack of versatility and a poor batting display in the final left them exposed.

They also made curious selection decisions throughout the tournament. They rotated Umar Amin up and down the order and Sohaib Maqsood in and out of the team. Amin played two innings of note but didn't make the impact he needed to change the perception that he's soft. Maqsood was poorly utilized and again struggled on the big stage. From a Pakistan perspective the improvement of Imam-ul-Haq was good to see. Imam demonstrated a more expansive array strokes that will only help him become a better cricketer in the future. Although much maligned, he deserves credit for making the most of this opportunity. Overall, I expect Peshawar to have another good campaign next if they retain their core of Sammy, Pollard, Akmal, Dawson, Wahab, and Hasan Ali.

Despite another up and down league campaign, United was always going to be a threat in the knockout stages. After defeating the Karachi Kings, we expected an epic battle against Peshawar Zalmi. Unfortunately, the top 3 of Luke Ronchi, Cameron Delport, and Alex Hales struggled to fire in front of a mammoth 215 at the National Stadium. That said, it would be unfair to blame the batting. United had arguably the best batting lineup in the PSL, with Luke Ronchi and Cameron Delport playing dynamic innings throughout the tournament. They were supplemented by a powerful lower order of Faheem Ashraf, Hussain Talat (Should be Batting at 3 for Pakistan in All Formats), and Asif Ali.

But for the first time in several years the bowling let them down. Both Mohammad Sami and Rumman Raees, stalwarts in previous seasons, struggled to make an impact. This is understandable. Sami is getting older and Raees was coming back from a serious injury. Although his final stats were decent, Shadab Khan was readily hittable throughout the season. That lack of reliability was exposed against Zalmi. Overall an average season for United, and one that begs several questions. The emergence of Muhammad Musa notwithstanding, why did the United allow Mohammad Hasnain to leave for nothing? Why didn't Samit Patel play the last two weeks of the tournament?

The Karachi Kings had another disjointed and unimpressive season. Led by Mickey Arthur and a New President, the Kings were underwhelming and poorly built. They lacked a balanced bowling attack and were too reliant on the Left Arm Spin of Imad Wasim, the Emerging Umer Khan, and Mohammad Amir. Usman Khan Shinwari despite some good moments particularly against the Gladiators, went for close to 10 an over. Sohail Khan went for close to 11. The batting lineup was good on paper but offered inconsistent resistance. Colin Ingram and Liam Livingstone were consistent throughout the tournament. While Babar Azam was consistent, his SR of 115.51 was futile. Overall the Karachi Kings were a poorly built, poorly coached, and poorly operated franchise. They continue to make the same mistakes in Year 4 as they did in Year 1.

Ownership uncertainty is never good for any Professional Sports Franchise. In two years of existence, the Sultans have succumbed to poor ownership, bad decision-making by the PCB, a cumbersome franchise fee, and poor overall leadership. Ali Khan Tareen seems to be evolved, confident, and genuinely interested in improving Pakistan Cricket. I am keen to observe his stewardship of the franchise. Part of that stewardship will include making three important decisions. In his two years as Captain of the Multan Sultans, Shoaib Malik has been short of inspiration. He's built the wrong squad, selected the wrong players, adhered to the wrong style of play, constructed poor lineups, and demonstrated a lack of tactical awareness of several occasions. His reward for poor captaincy was confoundingly the interim captaincy of Pakistan. The Sultans also need to decide on Shahid Afridi. Afridi is waning, and his salary is a burden on the cap. I would be interested to see if they will keep him. Finally, the Sultans need to decide on who is responsible for picking and building the franchise. Despite no change in that respect, Multan have picked two squads that lack quality, balance, and structure.

After 4 years of existence, the Lahore Qalandars continue to embrace their status as whipping boys. Despite having some really good players over the years, the Qalandars have consistently failed to build a winning team. Why? The Rana Family handle all cricket affairs rather than hiring trusted professionals. The result is there for everyone to see. As outside observers it is reasonable to point to the injuries of AB de Villiers and Mohammad Hafeez as important realities that hurt Qalandars chances. Although there is some truth to that, Lahore is simply a poorly run franchise.

Apart from relying on their own limited cricket knowledge, ownership in the past has hitched their wagon to the likes of Paddy Upton and Aqib Javed. Both have consistently struggled to build winnings teams over the course of their coaching careers. The Qalandars have also relied on big personalities such as Brendon McCullum. McCullum didn't understand or trust the talent at his disposal (who can forget the over he bowled against Karachi) and authored two increasingly poor seasons as Captain. The Qalandars like the Sultans need a reboot. They need a Professional running Cricket Affairs, a New Head Coach, and a Playing Structure on which they can build their cricket identity.

As we turn our attention to the 2019 World Cup it is important to take this opportunity to acknowledge a few things. One, the Pakistan Super League is one of the best run tournaments in the world. The PCB and the Event Management deserve a lot of credit for building value in the tournament despite logistical challenges. Hopefully the PSL will move to Pakistan next year, that will begin the next phase in Pakistan's Sporting Journey.

This tournament has exposed two obvious weaknesses in Pakistan Cricket. One, Pakistan is failing to produce top quality batsman. We are also failing to actively integrate and develop the talented players we do have. The day Azam Khan played ahead of Saud Shakeel was damaging for batting in Pakistan. Two, although our spin reserves aren't barren, our use and trust in spinners is waning. The decision not to play the likes of Ibtisam Sheikh and Usama Mir was a backward step. Spinners are crucial to the success of any team in every format.