"Bowlers like Mohammad Hasnain, Musa Khan and Naseem Shah require that extra support to get them to the next level" : Ian Pont

In an exclusive article for PakPassion.net, the renowned fast-bowling coach Ian Pont explains how through the establishment of a well-planned technical fast-bowling coaching programme across all levels and a player management system can Pakistan reap the full benefits of the enormous bowling talent that exists in the country. 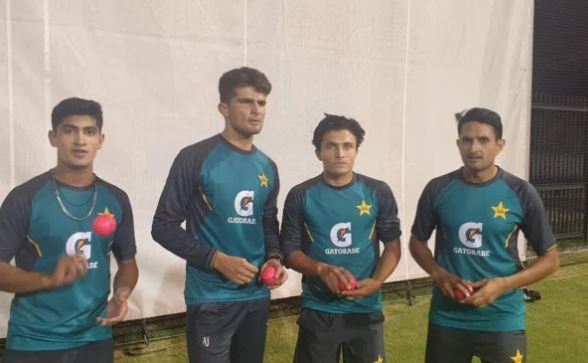 There’s an opportunity and a necessity for the PCB to make a genuine difference to the fast-bowling stock in the country. What I am seeing time after time after time, is a young player with raw pace being elevated very quickly and then discarded at pretty much the same rate. Or a young fast bowler failing to fulfil his ability, talent and flair. Something is not working as far as fast-bowlers in this country are concerned, and this has been the case for too many years now.

Rather than attempting to understand reasons, there has been a tendency to keep returning to the old ways that don’t work, whilst much of the rest of the cricket world moved on from a decade or so ago.

This is a failing on at least two levels:

1. The management of a fast-bowling workload
2. The technical skills coaching for those players to become world-beating bowlers

I have previously applied twice for the Pakistan fast-bowling position but never heard back either time. Under Dav Whatmore, he had asked me to technically review some footage of bowlers and suggest solutions but I could not be involved in any official capacity. I have also been working in the Tareen Cricket Academy (TCA) in Lodhran, South Punjab, setting up a pace camp attended by players like Mohammad Ilyas. What’s been clear is that many up-and-coming pacers have had little or no exposure to good coaching. But Ali Khan Tareen is passionate about developing talent and at the TCA, he has started something that could be of a much wider benefit.

When I was National Skill Sets Coach for the ECB at Loughborough, we had an 'emerging Test bowlers' group and spent a 6 month period working them up as a group. Then I headed up a regional section in the South of the country to identify talent and help fix faults in actions right across the age ranges, from junior level to senior. Much of this work which was done some 15 years ago, has been the benchmarking process for making the most of talent discovered. Correct pathways for players, opportunities to learn about the mechanics of human movement & biomechanics, gaining an understanding of diet, nutrition and how to take care of their mental state. It's a role I have taken on with The National Fast Bowling Academy in Hertfordshire over the last 3 years to help scout and produce young talent.

When I see the outstanding raw talent of bowlers like Mohammad Hasnain, Musa Khan, Naseem Shah and many others what’s clear is that they require that extra support to get them to the next level. Hassan Ali, Mohammad Abbas - even Mohammad Amir - there are many things that could be done technically to increase their skill levels, control and pace. Each have things to work on: often it is feet misalignment, a collapsed front leg, not fully stretched arm pull or other things that eat away at consistency. Because it’s not just game time and opportunities which you need to become a better bowler, it’s the knowledge of how to get better which is equally important.

And if a bowler doesn’t know (or isn’t told) about his problems, they cannot rectify it. They will lose form or pace, and then get left out and drift away, rather than making these improvements and developing into world class talent.

The fantastic emergence of Shaheen Shah Afridi is great news for Pakistan cricket but what concerns me most is the management of his workload. He is bowling an extraordinary amount of overs and is likely not far away from a potential breakdown if not managed properly. He has a great, repeatable action but even the most efficient will wear out if overused.

What’s certain is that only by planning a technical fast-bowling coaching programme across all levels and a player management system, will Pakistan fans will be able to enjoy much of the fine young talent which is emerging from tape-ball cricket and into first-class cricket, PSL and beyond.

There is a reason Pakistan doesn’t have a Jimmy Anderson or a Stuart Broad, with around 1,000 test wickets between then and still playing international cricket. The game has moved on since the days of Wasim Akram and Waqar Younis as players and Pakistan cricket should have taken the chance to do the same.

The results are now for all to see. You cannot hide from them. And if you keep on doing the same things, you will get the same results.

I was fortunate to have worked with both Dale Steyn and Shoaib Akthar. Shoaib graciously said nice things about me in his autobiography “Controversially Yours”. Dale of course, is coming towards the end of his career and whilst retired from international cricket, is still going in tournaments around the world.

I am very much looking forward to resuming coaching stints with TCA when we can get over the COVID situation and make a difference there. It would also be great to have the opportunity to make a difference at some level with a PCB pace programme, too.