"Sami Aslam has a very bright future ahead of him" : Taufeeq Umar

Pakistan opener spoke exclusively to PakPassion.net about Mohammad Hafeez’s dip in form and Younis Khan’s stature as one of Pakistan’s top batsmen. 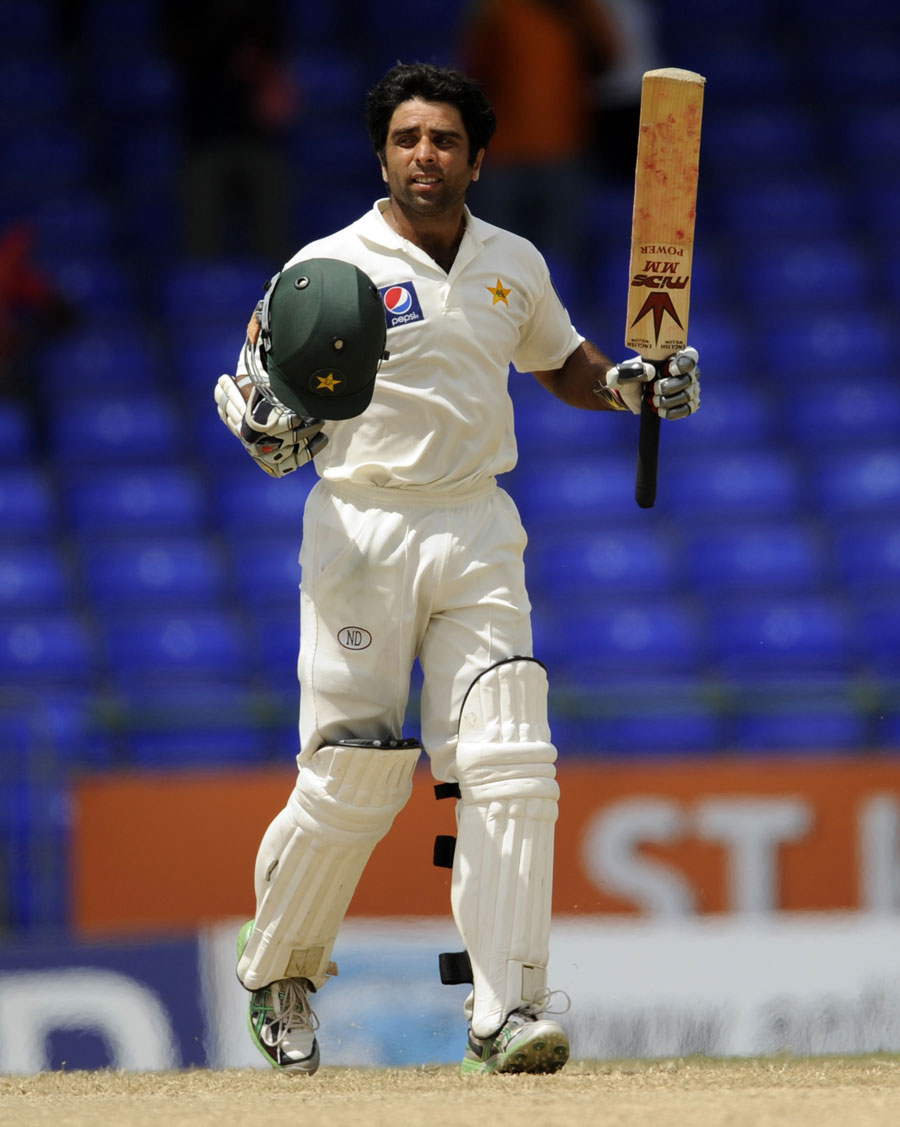 By Amir Husain (18th August, 2016)
The inability of Pakistan’s opening batsmen to make an impression in Test matches has been a source of intense debate over many years. Over the past five years, no less than fourteen pairs of batsmen have been tried out by exasperated Pakistan selectors but the failure to provide any sort of solidity at the top of the innings continues to spoil an otherwise satisfactory record of the Test team.

As an opener with nearly 3000 runs to his name which he has scored in forty-four Test matches, the left-handed Taufeeq Umar has played an important role in Pakistan’s Test successes of the past but like many others in that batting position, has not been able to cement his place in the national team.

Speaking to PakPassion.net, thirty-five-year-old Taufeeq expressed his views on issues surrounding some weak batting performances by Pakistan batsmen during the current tour of England, Mohammad Hafeez’s dip in form, Younis Khan’s stature as one of Pakistan’s top batsmen and his own aspirations of making a comeback to the national squad.
Apart from the outstanding victories at Lord’s and The Oval, the Pakistan batting exhibited well known frailties against quality pace bowling by England. In particular, the Pakistan openers’ inability to provide a solid foundation for the relatively experienced middle-order to build upon was a major contributor to two back-to-back defeats in the second and third Tests of the recently concluded Test series.
In Taufeeq’s judgement, the problem with the Pakistan openers' inability to adjust to English conditions should not have been a surprise for the team management. Indeed, these weaknesses are well known and should have been addressed before their departure for this summer’s tour of England.

“In my view, conditions in England are always very tough for openers to come to terms with. This should not be a surprise to anyone. To counter this challenge, a player needs to have sound technique and if there were problems in this regard, they should have been fixed before embarking on this tour. I am afraid, it’s here that Pakistan’s preparations did not go according to plan.”

As many had feared, the Pakistan opening combination of the vastly experienced Mohammad Hafeez and young Shan Masood did not materialise into a significant advantage for Pakistan in the first two Tests. Whilst Shan Masood’s inexperience could be credited with his failures, no such explanation was logically possible for Mohammad Hafeez whose form took a nosedive resulting in him being excluded from the team for the do-or-die fourth Test at The Oval.

As a former opening partner, Taufeeq expressed his puzzlement at Mohammad Hafeez’s inability to score big and felt that this could simply be attributed to a temporary loss in form as he stated “I watched Hafeez’s progress during the Test series and my view is that he was suffering from a temporary dip in form. What he needed was one good innings to get back in to rhythm and regain his confidence. Unfortunately, he was unable to get his form back in the three Test matches he played and consequently found himself dropped for the fourth Test. I will, however, say that it is down to each batsman to try and iron out any flaws in his technique before coming to a tour of such importance. The homework needed to succeed at this level needs to be done beforehand, as each batsman is aware of the types of conditions he will face when he comes to England.”

One of the outstanding success stories for Pakistan in the Test series must surely have been the emergence of Sami Aslam as an excellent opening batsman. His innings of 82 and 70 in the Edgbaston Test rightly filled many Pakistan cricket followers with great hope but as Taufeeq pointed out, Aslam has significant work ahead to ensure he can continue to serve his team with distinction.

“Sami Aslam has had a wonderful re-introduction to Test cricket with two magnificent innings at Edgbaston played under immense pressure. However, I also know that England may have been surprised by Sami’s performance in the third Test and would have gone away and done their analysis to work him out. This is something we saw in the first innings of the fourth Test match and now the challenge is for Sami to concentrate harder to ensure he comes out on top against other oppositions in the future. If he continues to perform well then it would go a long way to solve Pakistan’s opening conundrum. I believe he has a very bright future ahead of him.”

Until the first innings of the fourth Test, Younis Khan had scores of 33, 25, 1, 28, 31, 4 which by his standards represented nothing but failure or at best, a serious dip in form. He managed to turn that around in dramatic fashion by scoring a match-winning double-hundred at The Oval. To many, like Taufeeq, the age old saying that form is temporary but class is permanent is the only real way to describe Younis Khan’s progress during the recently concluded Test series.

“Younis is a world-class batsman and there is no doubt in my mind about that fact. His below par performance until the fourth Test was a case of bad form and I am convinced that it just needed one good innings to bring him back to the type of excellence we are used to seeing from him. This is exactly what we saw in the first innings at The Oval and that too at a crucial stage of the game. His brilliant performances for Pakistan, including those achieved in England, are well known to all of us which is why his innings at The Oval should not really be a surprise to us. This Test series has ended now so unfortunately there aren’t more opportunities for him to demonstrate his capabilities this summer but the fact remains that he is one of the finest players to have ever represented Pakistan.”

Whilst Mohammad Hafeez may well be suffering from a temporary dip in form, it is a fact that the opening slot for Pakistan is a matter of constant worry and this is where the experienced hand of Taufeeq Umar could well be needed to steady the ship. Having last represented Pakistan in a Test match in November 2014, Taufeeq is very keen to re-establish himself in the team. However, Taufeeq knows that mere words will not find him a place in the Pakistan team and the only way forward is via the tried-and-tested route of performing at the domestic level.

“I have been playing First-Class cricket for my domestic team, SNGPL, and hope to put in my best efforts in the upcoming season as well. My aim is to perform well and give myself the best chance to make a comeback to the national team”, he concluded.
Discuss!