The young Islamabad skipper will have to play a leading role if his side is to make it to the final stages of the tournament. 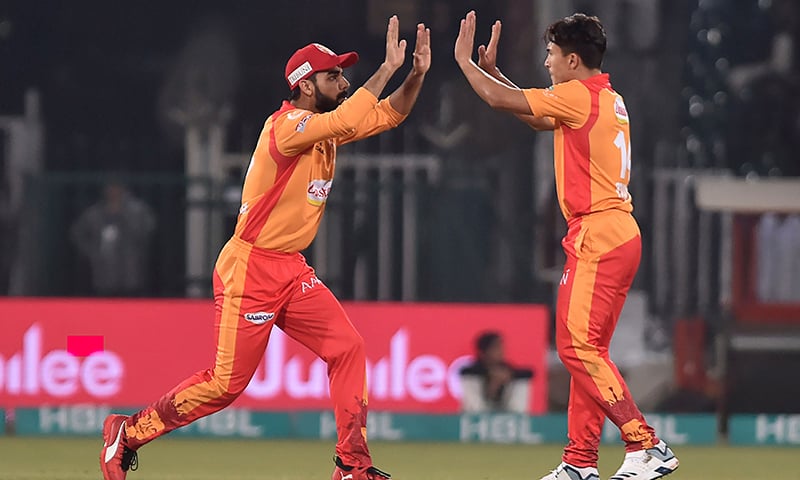 Having won the Pakistan Super League on two previous occasions, Islamabad United were once again expected to be a force in last year’s tournament. However, only 3 wins out of a possible 10 meant that they became the whipping boys and finished bottom of the table with just 7 points after a lacklustre and disappointing tournament.

As expected, the owners were unhappy with the results and the performance of the team and took appropriate action. Out went Head Coach Misbah-ul-Haq who the PCB felt had enough on his plate and he was replaced by former South African spinner Johan Botha. In addition, former Pakistan spinner, Saeed Ajmal was promoted to Assistant Coach with Rumman Raees added to the coaching staff as the Bowling Coach. Strangely though some of the backroom staff were not replaced.

The first thing that strikes you about the Islamabad United squad this time around is the strength of the bowling unit. The acquisition of Hassan Ali after his requested departure from Peshawar Zalmi was an expected move. Add to his outstanding skills, Faheem Ashraf, Akif Javed, Ali Khan, Shadab Khan, Fawad Ahmed, Musa Khan, Zafar Gohar and Lewis Gregory and you can see that United have all bases covered when it comes to bowling resources. Pace-bowlers, medium-pacers, leg-spinners, left-arm spinner, the variety and the quality is there in abundance. It won’t be easy to score runs freely against this bowling line-up.

With the loss of Colin Munro due to Covid-19 protocols in New Zealand, United look pretty thin when it comes to batting options despite the acquisition of Paul Stirling. Alex Hales who has moved from Karachi Kings will be heavily relied upon to score the bulk of the runs at the top of the order. Apart from Hales and Stirling one wonders just who will be able to provide the impetus and runs at key moments.

Hussain Talat, Iftikhar Ahmed and Asif Ali cannot be relied upon in the 20-over format, and are hardly considered the most consistent batsmen in Pakistan. Rohail Nazir and Phil Salt could score some useful runs in the middle-order, but neither are seen as match-turning batsmen. It could be that United will need exceptional performances with the bat from Faheem Ashraf and skipper Shadab Khan who promoted himself to number 4 in last year’s tournament.


Players to watch for

Shadab Khan became the youngest player to skipper a Pakistan Super League team last year and whilst his team didn’t qualify for the second stage, his own performances were more than satisfactory. He led the team quite well and showed enough with bat and ball and in the field to inspire his team-mates. A year older and wiser and with more cricket under his belt, Shadab could be the inspiration and leader that United’s players need to raise their game.

The bowling looks fine, the all-rounders available look adequate, but the batting looks too reliant on Alex Hales and Paul Stirling and the lower order. Shadab at number 4 may work, but ideally to win a tournament you don’t want Shadab batting at number 4 in every match. Whilst Hales is a match-winner on his day, you cannot expect him to play match-winning innings in every match and the United squad doesn’t have the look of a tournament winning one. Whilst the lowly position of bottom of the table should be avoided this time, Islamabad don’t have the overall look of champions. If they perform well, they could reach the second stage but that will probably be as far as they will go unless one or two of their players step up and have incredible tournaments.