"I feel I am ready for international cricket" : Sahibzada Farhan

Having already built a strong reputation as an aggressive limited-overs batsman, 22-year-old Sahibzada Farhan continued to impress all during the 2018 edition of the Pakistan Super League (PSL) where he played for Islamabad United. The right-hander struck a quickfire 44 off just 33 balls in the final of the PSL which was instrumental in his side's success as they became champions for the second time.

In an exclusive interview with PakPassion.net, Sahibzada spoke about the improvements he needs to put in to prove himself in the longer format of the game, why he is not disappointed at missing out on the recent T20I series against Scotland, his experience of playing in the PSL and in particular working with Dean Jones and Waqar Younis during the tournament, and his aspirations for making it to Pakistan's Test team in the future. 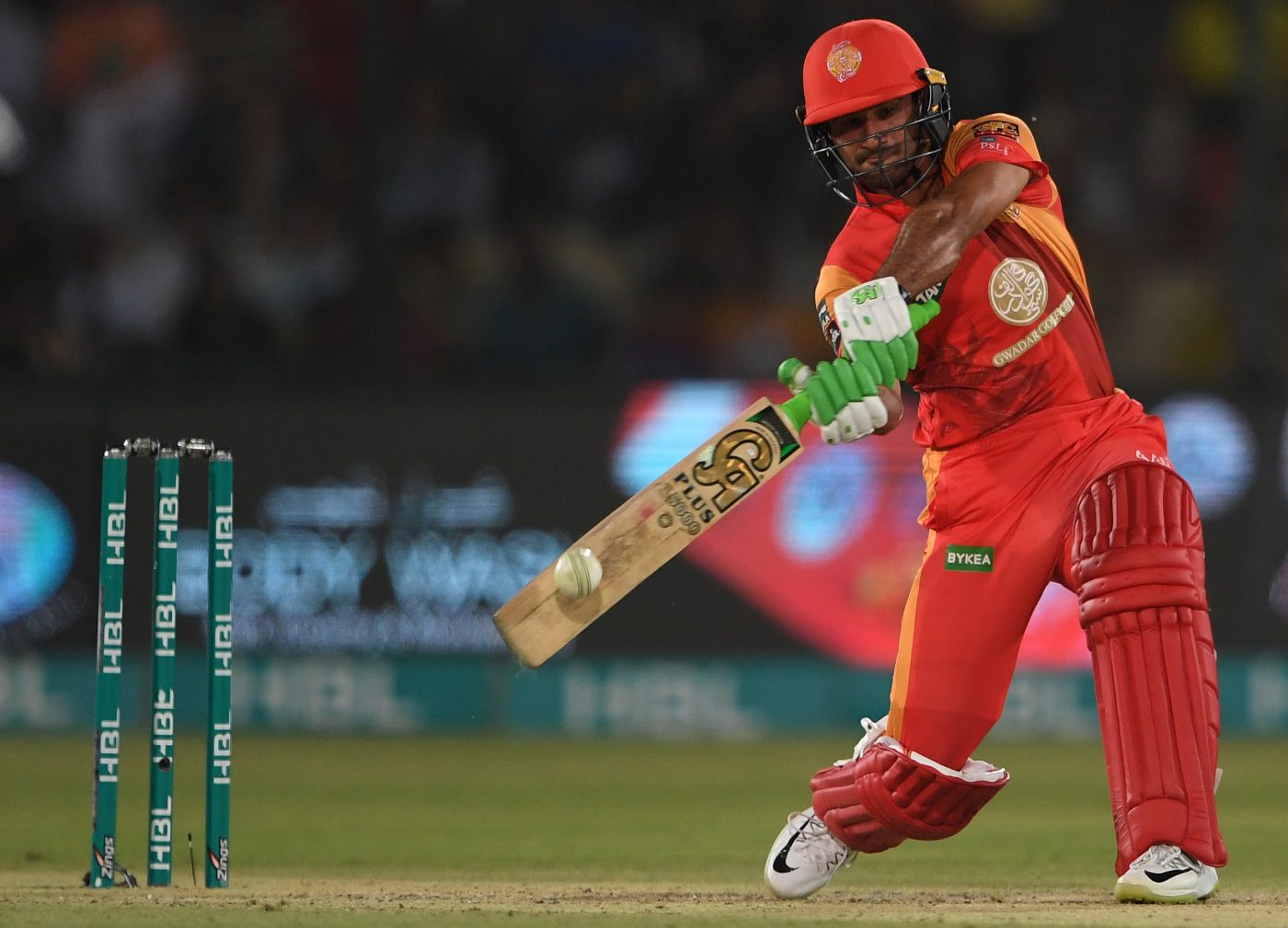 PakPassion.net: You have now been playing professional cricket since 2013, what areas of further improvement have you identified for yourself?

Sahibzada Farhan: With The Almighty’s grace, I have played a lot of cricket since my Twenty20 debut in 2013 during a Ramadan tournament. But, the cricket I have played has mainly been in the formats which use the white-ball. What I am looking to focus on is to play in the 4-day format in our domestic cricket and for that I will need to put in some extra work. In specific, I have been told by Dean Jones to work on my strike rotation as its common knowledge to my opponents that I do try and hit every ball, so they adjust their fields accordingly, which is a big weakness in my game. With all these improvements, I would also like to perform in the longer format and score runs to show that I am capable of doing well in the red-ball format as well. I have a good record in the Limited-Overs formats but, my goal is to impress everyone in 4-day games as well.


PakPassion.net: What do you have to say to your critics who believe you are nothing more than a T20 slogger?

Sahibzada Farhan: I really have no problems playing in the 4-day format of the game with the red-ball. The only issue is that you have relatively less chances of playing First-Class cricket as there is only one big domestic tournament in the year. Then, you have a number of One-Day and T20 tournaments including the PSL and now we even have T10 competitions as well, so a player has to mentally adjust for that style of cricket. Having said that, I would like to say to my critics that I am working very hard for the next season for First-Class games. I have played well before against the red-ball, so I am sure I can do it again.


PakPassion.net: What were your feelings about not making the squad for Pakistan’s T20I series against Scotland?

Sahibzada Farhan: I wasn't disappointed at my exclusion from the Pakistan squad for the recent series against Scotland. I understand that there are some things which are not in one’s control and one should not take such things to heart. I believe in my abilities and know that when the time is right, and with the Almighty’s blessings, I will get my chance to play for Pakistan.


PakPassion.net: You had a very good Ramadan tournament this year. How do you feel about that?

Sahibzada Farhan: I took part in the Naya Nazimabad Ramadan Cup T20 Cricket Tournament this year and I had some good scores including 90, 80* and 79 and was Man of the Match on three occasions. At the conclusion of the tournament, I was also named the best batsman of the tournament as well which was very pleasing for me. Let me tell you that this Ramadan tournament was of a high standard which is why performing well in this competition was very special for me. One of the participants in this tournament, Kamran Akmal, who is a highly regarded batsman and one who scores well in most tournaments he plays in, mentioned to me that the quality of batsmen and bowlers in this tournament was as good as any he had encountered anywhere before. With such comments from a top-class player, I was very happy and satisfied that I was able to score so well in this tournament.


PakPassion.net: Do you feel you are ready for International Cricket?

Sahibzada Farhan: I feel that I am ready for international cricket and playing in the PSL has a lot to do with that. The reason is simply that in the PSL you are batting against Pakistan's and also the world’s top bowlers. From what I understand, the PSL is also one of the world’s top Twenty20 Leagues and if one can play in this tournament and learn from it, then there is no doubt in my mind that one can easily play at the international level as well.


PakPassion.net: What was it like to work with Dean Jones as well as Waqar Younis in the PSL?

Sahibzada Farhan: I had a great experience working with Dean Jones. He really appreciated my skills as a batsman and also gave me a lot of useful tips during nets which I am sure will come in very handy for me in the future. He was of the opinion that during the PSL, I should play in a style which is natural for me and that I should concentrate on my strong areas, and not try and change too much as that same style of play obviously gets me runs. If there was any change required, I should work on it after the tournament had ended. Dean Jones was very happy with my attitude as well. But I would like to especially mention Waqar Younis who worked very hard with our Islamabad United squad at the PSL. He really did put in a lot of effort in bowling and batting with all the youngsters in the squad, including Faheem Ashraf, Asif Ali, Shadab Khan and myself for which we were all very thankful.


PakPassion.net: How was the experience of playing in the final of the PSL in Karachi?

Sahibzada Farhan: I cannot express in words my feelings about being at the National Stadium in Karachi that evening for the PSL final. It was probably the most memorable time of my whole life. I had previously played in Karachi some time ago but this PSL final was nothing like my earlier experience. Just being part of such a huge event, with a packed stadium was just amazing and a great achievement for me. Scoring 44 runs in the final against a good bowling attack and being part of the Trophy winning squad was also something that will remain in my memory forever.


PakPassion.net: How did it feel to be rubbing shoulders with high quality cricketers at the PSL?

Sahibzada Farhan: To play alongside and against some of the best players in T20 cricket was a really good experience and gave me a lot of confidence. I got to face a top-quality bowler like Mohammad Amir who I had not played before. I also had the chance to face Hasan Ali and of course, I had never played against one of the biggest stars of our country, Shahid Afridi whom I got to face as well. Within my squad, we had some top-class international players like Samit Patel and Luke Ronchi and I have to say that due to the way they behaved with us, it never made us feel that we were junior to them in any aspect. I mention these two players because Ronchi and Patel took time to work with each of the junior players to give them useful tips which I am sure will help us all in the future.


PakPassion.net: Looking ahead, are you looking to change your style of play?

Sahibzada Farhan: Of course, I am looking to play in a more responsible manner, but I still go by my philosophy that if a ball is there to be hit, I will not let it go without dispatching it to the boundary. During the recently concluded PSL tournament, my team Islamabad United and Karachi Kings were practicing at the same venue. Waqar Younis was trying to help me practice to score runs off my weak areas. He worked on me for a few hours with not much luck. Mohammad Rizwan, who was watching from a distance, came over and told Waqar that you can keep on practicing for as long as you like at Farhan’s weak spots and things will not improve. But, he could bet anything with Waqar, that if the ball came in the right place for Farhan in his strong area, it would be deposited outside the boundary in no time. After Waqar heard this, he told me to come out of the nets and just play the way I normally play. I did not disappoint as in the game I hit Usman Khan Shinwari for a six and also struck a six off Tymal Mills as well. My point is that, yes, I will look to play responsibly but I will never miss an opportunity to score when the ball is in the right place for me to hit.


PakPassion.net: You have a great reputation in the shorter formats of the game but down the line, are you also interested in playing Tests for Pakistan?

Sahibzada Farhan: Like any other player, I feel that Tests are the ultimate challenge for a cricketer and I would like to represent my country in Tests at some point. But, I also know that to get to that point will require extreme patience and hard work which I am prepared to do.


PakPassion.net: What targets have you set for yourself in the upcoming domestic season?

Sahibzada Farhan: The target in my mind for the upcoming season is simply to top the charts as a batsman. It’s not just this season, but my aim always in every tournament I play, whether it’s the PSL or any other, is to be the best batsman or at the least be in the top 5th or 6th position in the list of run-scorers. So, with the help of The Almighty, I am working hard to achieve the same in the coming season also. Whether I will continue to play with Peshawar in First-Class cricket or with another team is something time will tell but my goal, to be the best this season, will remain the same.
Discuss!