"Pakistan will be a force to be reckoned with at the World Cup" : Nasser Hussain

In an exclusive interview with PakPassion.net, former England captain Nasser Hussain spoke on a variety of topics including the importance of India-Pakistan games in the World Cup, Pakistan's chances of repeating their success of the 2017 Champions Trophy in the upcoming World Cup, Mohammad Amir's recent form in ODI cricket, the importance of the young batsmen in the Pakistan team, looked forward to watching Shaheen Shah Afridi and Mohammad Hasnain in action and offered his views on the Mickey Arthur-Sarfaraz Ahmed partnership. 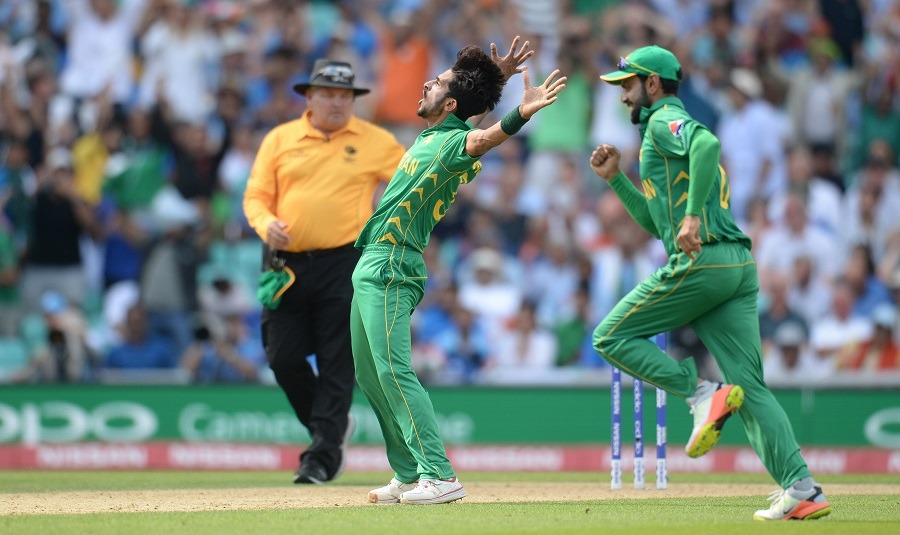 By Saj Sadiq (28th April, 2019)
PakPassion.net: Describe what an India versus Pakistan cricket match means to you?

Nasser Hussain: I am working on the India versus Pakistan World Cup game and it was one of the first games I looked to see what am I doing, where I will be on that day and whether I have been given that game to work on. Wherever it is around the world, whatever stage of the tournament, whether it's in the group stages or knockout stages you know there are a hell of a lot of people not only watching it but are glued to it and any mistake or piece of brilliance is analysed to the nth degree. It is simply one of the biggest occasions in world sport, let alone world cricket. India will be looking for a bit of payback after the Champions Trophy Final defeat to Pakistan and in general in ICC tournaments India have the wood on Pakistan, but as we saw in that Champions Trophy Final if Pakistan get it right on the day, they can beat anyone.


PakPassion.net: Can Pakistan repeat their achievements of the Champions Trophy 2 years ago?

Nasser Hussain: How long have you followed Pakistan cricket, you know what they are all about. Many Pakistani fans will say they have followed their team for too long and had their hearts broken many times, but I love them, and I love their cricket. I love them because they are mercurial Pakistan and you wonder which Pakistan will turn up on the day. I turned up for that Champions Trophy match at Edgbaston against India two years ago and Pakistan were awful, they were terrible, and everyone just presumed that they'd be knocked out of that tournament and nobody would hear from them for a while. But then they turned up and hammered England and hammered India in the final, that is Pakistan cricket for you at its best and that's why they are so watchable. The fact is that you cannot write off Pakistan for this World Cup.


PakPassion.net: What are the key aspects of the Champions Trophy 2017 win that Pakistan should look to repeat in this World Cup tournament?

Nasser Hussain: Mickey Arthur and Sarfaraz Ahmed must get across to their team that the template to win the World Cup is not the one from the Champions Trophy. If things don't go well at the start of the tournament or in warm-ups and they aren't playing great cricket don't just presume that we will turn it around, you've got to make sure you turn it around and don't just live-off the fact that this is Pakistan cricket and we will be alright. It doesn't always work out like that.


PakPassion.net: What do you feel are Pakistan's strengths this time around?

Nasser Hussain: One thing that you know about any Pakistan team and whoever they pick is that they will have bowlers who will win you games and in modern One-day cricket you need bowlers that will take wickets and put a stop to the run-rate. Nowadays the only way to stop the run-rate as Brendon McCullum worked-out in the last World Cup was to take wickets and that's why he had that big slip cordon for Tim Southee and Trent Boult. You have to take wickets otherwise batsmen with wickets in hand will score at 10 runs an over for the last 25 overs. Pakistan have a bowling attack that will always take wickets and they are very good in ICC tournaments. They play good tournament cricket and they don't freeze. They will be a force to be reckoned with at the World Cup.

Nasser Hussain: Obviously there has been a lot of disappointment from Pakistan fans regarding Mohammad Amir and I am sure that for such a high-quality bowler Amir himself is disappointed in these statistics and his output. It seems that the white ball isn't swinging as much for him these days. When I recall Mohammad Amir at his best, he was bowling those big booming inswingers and then the one going across the batsman became a threat. When the ball hasn't swung for him, what is his plan B? There's been a drop-off in pace from Mohammad Amir, and perhaps it's a confidence thing. But having said all of this, I see him as a big-match player and one only has to think back to how he bowled in the Champions Trophy final and the players he got out. There is no doubt that he gets great players out when he is on-song. It doesn't matter who you are, with his recent statistics, nobody has a God-given right to be on the team sheet day-in, day-out and you have to perform. Like I said, Pakistan will always have top-quality pace-bowlers so competition for places will be intense. I think they have done the right thing with Mohammad Amir, go to England, play in the 5-match series against England, the door is not closed on you and we will pick from that 17-man squad and let's see if you can get back to your best. We want you to do well, but you have to make sure you put in the performances in those 5 ODIs against England to play in the World Cup.


PakPassion.net: How vital will Mohammad Hafeez and Shoaib Malik be for Pakistan at the World Cup?

Nasser Hussain: They will be vital but Pakistan in general have to find a way of getting a score. When I see Pakistan and I see a batting line-up that can get them to around 280, then with their bowling line-up I think they are in the game. What they need and what Mickey Arthur will want is a batting line-up that can keep them in the game and not just have the wheels fall of. Hafeez and Malik with their experience have to work out what is a good score for their bowling line-up and conditions. Yes, they will be important but sometimes in Asian teams they rely too much on and focus too much on the senior players. Instead, what you should be looking at actually as a batting line-up are the players who are going to deliver regular scores and take the team up to scores of 300 or more.


PakPassion.net: Who do you see as the key batsmen for Pakistan at the World Cup?

Nasser Hussain: I look at Babar Azam and see him as the batsman in the Pakistan batting line-up who can take his side to the 300 mark. I also look at Fakhar Zaman and recall what he did at the Champions Trophy and in fact it is these guys that I look at as the ones who can take Pakistan from a competitive score to a good score. Mohammad Hafeez and Shoaib Malik can take Pakistan to a certain score but actually I am always on the lookout for star names that can put in stellar performances and make you sit back and go wow, this lad can play. If Pakistan can get one or two of their star younger players doing a Virat Kohli or being like a Jos Buttler or doing a Kane Williamson or a David Warner, then that's when Pakistan will be right in the tournament. So, it's the younger Pakistani batsmen that I am looking out for at this World Cup.

Nasser Hussain: Absolutely. This is what Pakistan have always done from when Imran Khan picked Wasim Akram and Waqar Younis all those years ago. Pakistan always produces these players and the moment they play it's like wow these lads have got something about them. This is what Pakistan do, they play them, they pick them, and they give them a chance. It doesn't matter how old they are, it's all about whether they are good enough. They don't worry about their age or their lack of experience, they pick them and play them and as Michael Holding always says, facing pace does funny things to any batsman. If you have a bit of pace coming at you, you can do some silly things as a batsman. If you can clock 90mph as Mohammad Hasnain and Shaheen Shah Afridi can then that is the sort of wicket-taking potential that will win this World Cup.


PakPassion.net: What in your opinion will be the key factor for any team to win this year's World Cup?

Nasser Hussain: I think it will be a high-scoring World Cup and the team with the best bowling attack and who has wicket-taking bowlers and potential throughout the 50 overs so that there is no period where the game is drifting along in the field will win the World Cup. If Sarfaraz Ahmed can throw the ball to his young-guns and say give me 3 overs and we need to get Jos Buttler out, or get Kohli for me, we need to get MS Dhoni or dismiss Steve Smith or Kane Williamson, it doesn't matter how many runs you go for, just get me a wicket, that will be the difference between winning and losing a World Cup game. The days of just sitting-in with line and length bowlers trying to bowl some dots and boring out the opposition have gone and you have to blast the opposition out nowadays. There will be days when, as England will find out with Jofra Archer when these wicket-taking bowlers will bowl 10 overs for 80 runs and you will wonder what all the fuss is about and have we picked them too early, but there will also be days when you think crickey, this lad has got something about him and is exactly what we need.


PakPassion.net: What do you make of the duo of Pakistan skipper Sarfaraz Ahmed and the Head Coach Mickey Arthur?

Nasser Hussain: I really like Sarfaraz Ahmed and I like the Sarfaraz Ahmed and Mickey Arthur combination. Mickey has worn his heart on his sleeve and with me working on television I know that any time something emotional is happening on the field or some event is happening in Pakistan cricket during a match I have a producer in my ear saying get the camera on Mickey Arthur for his reaction. Pakistan is a very emotional, cricket-loving nation and what Pakistan need is a street-fighter-type in charge of the team and I mean that in the nicest of ways and Sarfaraz Ahmed is that street-fighter and someone that I would definitely want to go to battle alongside against any opponent. Yes, Sarfaraz Ahmed has made his mistakes and had his misdemeanours and had his critics but I think Sarfaraz Ahmed has got something about him. He could easily have walked away and just been a player, but he has got something about him and in the heat of battle he will not bottle anything. I don't see Sarfaraz Ahmed as a bottler, I see him as a real fighter and the Pakistan fans that I know and have known over the years they want their team to fight, and with Sarfaraz Ahmed and Mickey Arthur you get that fighting spirit in abundance.
Discuss!