"I don’t think I have any issues with my technique" : Fakhar Zaman

Fakhar Zaman shot to fame during Pakistan's successful 2017 Champions Trophy campaign where he starred in the final of the tournament with a belligerent century against arch-rivals India. Considered a key player at the top of the innings, Fakhar has so far played 77 international games where he has scored 2768 runs. He also holds the record for the only Pakistani batsman to have scored a double-hundred in ODIs.

In an exclusive interview with PakPassion.net, Fakhar Zaman spoke in detail about his stint at Glamorgan where is currently representing the county in the T20 Blast tournament, why he feels its important for Pakistani cricketers to play county cricket, changes he needs to bring to his game to score more runs and his thoughts and predictions on the ongoing Ashes series. 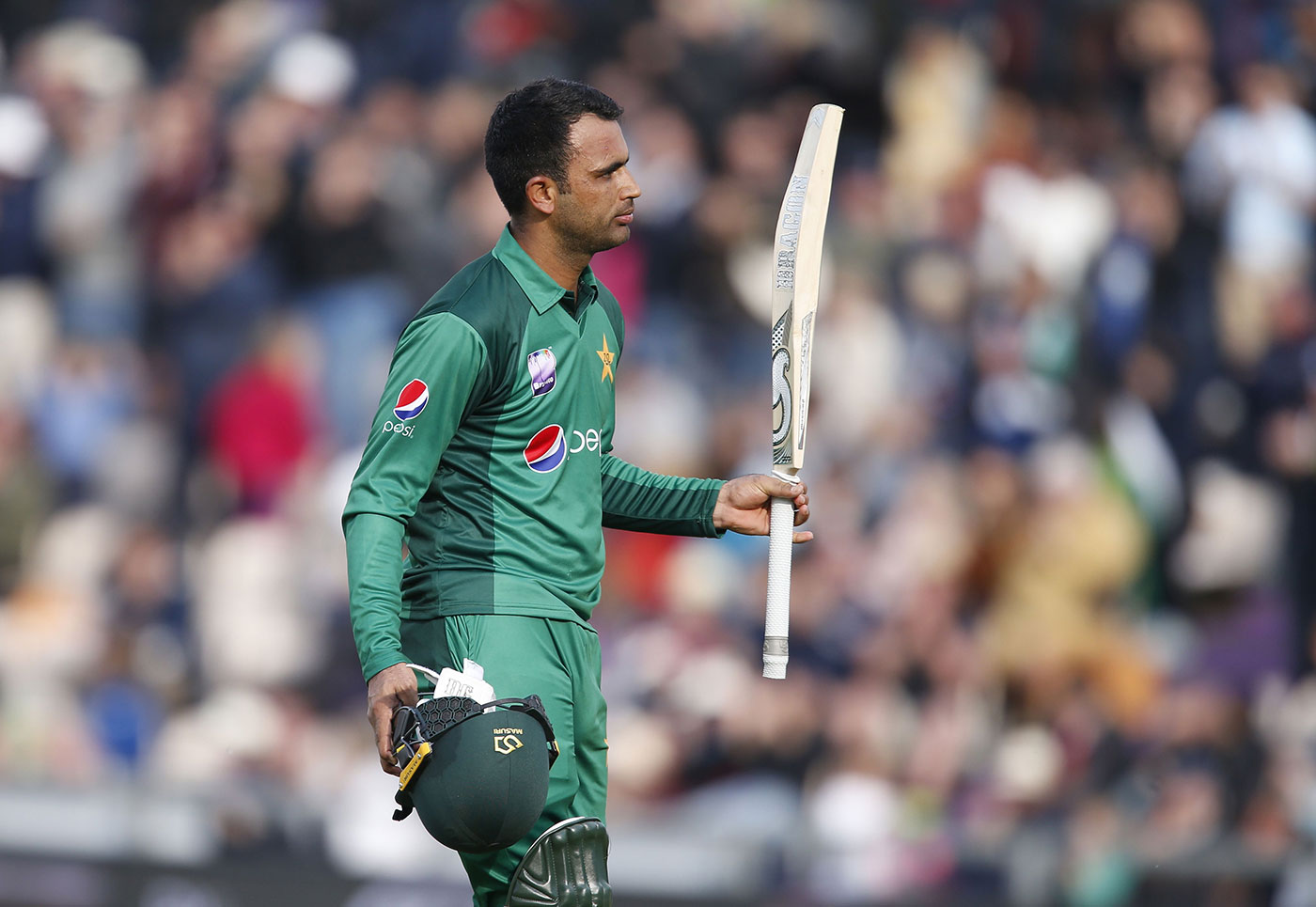 PakPassion.net: Tell us about how the chance to play in the T20 Blast tournament with Glamorgan come about and why you chose to take that?

Fakhar Zaman: I have always been interested in playing for a county team in England and that almost happened about two years ago when I was asked to play for Somerset. As the West Indies and World XI sides were touring Pakistan, I had to decline the opportunity, but I never gave up that idea. So, when Mickey Arthur recently mentioned to me that Glamorgan were interested in taking me on as an overseas player for the T20 Blast, I didn’t think twice in accepting that offer. The fact is that county cricket is an excellent setup to be part of and is a great place for any player to develop his skills and so playing for Glamorgan is a great opportunity and challenge for me as a player.


PakPassion.net: What makes the T20 Blast tournament so special in your view?

Fakhar Zaman: To start with, the top quality of local talent is what really makes this competition so special and tough as well. Along with a maximum of two overseas players in each side, the type of cricket that each side plays is excellent to watch and is thoroughly enjoyable from a players’ point of view as well. The schedule of this tournament is also attractive for players with enough time allocated for travelling to play away games and of course, the whole county setup is special in itself.


PakPassion.net: How have you found the experience of playing with Glamorgan side during your stint?

Fakhar Zaman: I really don’t have words to thank Glamorgan for taking such good care of me during my time with them. Even though my performances have not been to the level that I expect of myself, I have been getting great support from the management and all my teammates. Glamorgan have left no stone unturned to facilitate all my requests which has really made my stay here very enjoyable. You know that whenever you go to a new place, all sorts of doubts enter your mind about how you will adjust there and so on. But I am glad to say that coming to Glamorgan, it took me just 3-4 days to get settled in with the side and team management and it really feels like that I have known my teammates since a long time.


PakPassion.net: Would you recommend the county experience to other players in the Pakistan side?

Fakhar Zaman: I would do that without a moment’s hesitation. In my case, I had only heard about this experience from past legends who would always recommend playing county cricket to cricketers for them to improve their game. Remember that in county cricket, it’s not just about scoring big runs and taking lots of wickets. The level of professionalism that one can add to his game by playing here is something that is definitely important too. If I had my way, and if asked for my advice, I would recommend county cricket to every player I know.


PakPassion.net: Playing in early summer for Pakistan against England and then in the World Cup must have helped you get used to the conditions here for T20 Blast?

Fakhar Zaman: To be honest, what we are seeing nowadays are far from the typical English conditions that we normally refer to. In fact, the current warm weather is making me feel that I am playing somewhere in Asia. It is true that when we arrived in England before the World Cup, we got time to get used to the World Cup and that helped us a lot as conditions were closer to the typical England ones. However, at this point in the T20 Blast tournament, the weather is so warm that even I as a someone from Asia and one who is supposed to be used to the heat is finding it difficult to cope. I can only imagine how the conditions would be effecting those not used to the heat.


PakPassion.net: What changes do you need to bring to your game to help improve your performances in T20 Blast?

Fakhar Zaman: A cricketer is always looking to improve his game, regardless of the format he is playing or what stage of his career he’s at. What I am looking to do at this stage of the tournament is to play a longer inning as I feel that not doing that is affecting my success rate for the team. I don’t think I have any issues with my technique and the ball is coming on nicely to the bat for me. I just need to take more time at the wicket as that I am sure will help me put bigger scores for the team.


PakPassion.net: Must be good to play under the leadership of Colin Ingram, whom you would have seen in the PSL as well?

Fakhar Zaman: I have seen Colin play in the PSL, but he is now our captain at Glamorgan and honestly speaking, it’s a pleasure playing under his leadership. He’s a good captain and very supportive of me as is our coach Matthew Maynard. Playing in such company is a lot of fun and is making the whole experience enjoyable for me.


PakPassion.net: Is it difficult for players to find the right balance between playing in Twenty20 Leagues and domestic cricket?

Fakhar Zaman: In my mind there is no doubt that domestic cricket is where a player improves his game. It’s also a venue where players are developed properly who can serve their country at a future point. It's true that in today’s world, you can get a lot of exposure if you do well in Twenty20 Leagues but I for one will always prefer to play domestic cricket over such leagues. Especially, with the proposed changes to Pakistan’s domestic possibly coming into effect soon, I am really looking forward to this experience at home. Whilst domestic cricket must take priority over Twenty20 League cricket, I feel that there is room for both types of cricket in a player’s life and that should be based upon mutual understanding with the national team management. In my case, during the tour of New Zealand in 2018, I had offers to play in four leagues but our then Head Coach Mickey Arthur insisted that I don’t play in any such tournaments until the World Cup to help me maintain my fitness which was a good decision.


PakPassion.net: How do you compare Twenty20 cricket in England versus PSL and other tournaments you have played in Pakistan?

Fakhar Zaman: Whilst there is no difference in the format of the game, the PSL tends to be more competitive as there are six sides representing the whole of Pakistan. With 4 foreign players allowed, the sides can field very competitive teams so each game is very tough. In contrast, there are 18 teams in the T20 Blast so quality of competition can be affected by that. However, where the difference really shows is in the types of wickets which we play on in England. The conditions aren’t that easy as one would expect in a Twenty20 game. Here, you can get to play on different types of wickets and you never know what type of surface you will play on in the next game. This is the only real challenge of playing Twenty20 cricket in England and does make it special.


PakPassion.net: For many people, it seems that you have been found out in international cricket and that opposing teams know how to get you out with ease. Do you agree with that assessment?

Fakhar Zaman: Whenever one performs well in a game, then there is very little criticism. But when you do not do that well, then all sorts of things are said about a player. In my experience, people who have played cricket before will not say things like ‘Fakhar has been found out’ etc. To give you an example, take what happened in the first ODI game against England. I was out for 3 in that game and we heard all sorts of things about my technique being said including the fact that somehow, I had been found out by the opposition. In the next game, I scored 138, and the comments were completely different. I always try my best and of course people will say what they want to but let me tell you that after the kinds of things that have been said to us in the recent past, nothing really shocks us at all.


PakPassion.net: Who do you see as the favourites in the current Ashes Tests being played in England?

Fakhar Zaman: To be honest, both sides are very good and well-balanced and it’s difficult to pick an outright winner. We have England playing at home but then as we have seen, Australia, are also in good form so the competition as always between the two sides is pretty intense. However, one thing that favours Australia at the moment is the weather as the warmer part of the English summer suits the visitors’ game very nicely. Of course, Steve Smith is in great form for Australia but amongst all the players that have impressed me immensely so far is Matthew Wade. Not many were expecting him to play this well, but he scored 110 in the second innings of the first Test which helped put the pressure on England and lead to Australia’s victory. To me his innings was brilliant, and I really enjoyed following it.
Discuss!