"To play in front of such big crowds and passionate fans is simply amazing" : James Vince

James Vince since his international debut in 2015 has played 13 Tests, 13 ODIs and 12 T20Is for his country. Now representing Multan Sultans for his second Pakistan Super League season after a useful stint at the Big Bash League where he hit 323 runs at a strike rate of 123.28 for Sydney Sixers, Vince is all set to play a key role for the PSL side as they look for their first title.

In an exclusive interview with PakPassion.net, Vince spoke about his experience of playing the PSL in Pakistan under the guidance of Head Coach Andy Flower, the feeling of being a part of England's World Cup winning squad, his aspirations to make a comeback for England in Tests and his views on the leadership of Joe Root and Eoin Morgan. 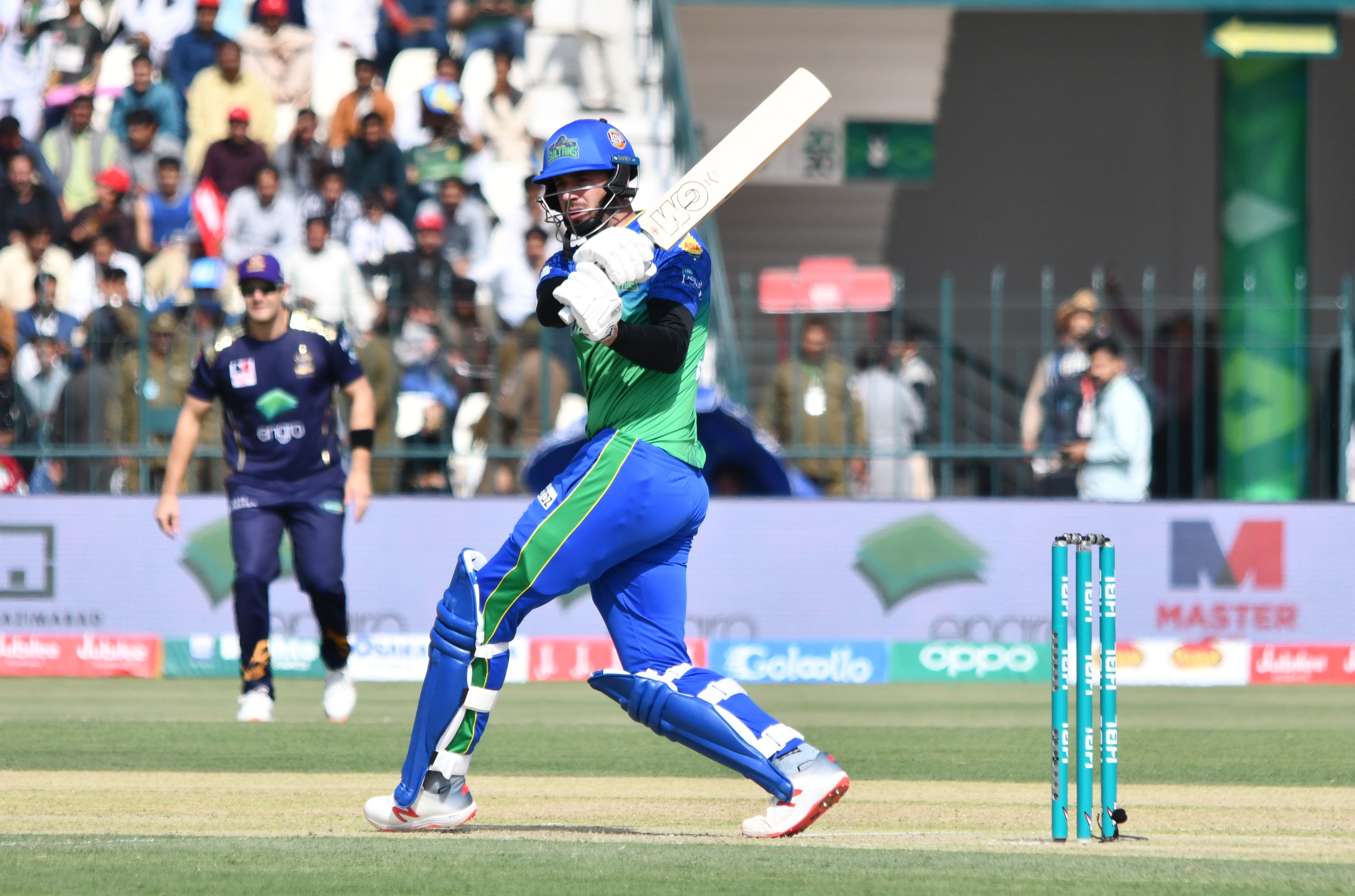 PakPassion.net: How would you describe the experience of playing for Multan Sultans at the PSL so far?

James Vince: I played for Multan Sultan’s last year and was glad to be retained by them for the current edition of the tournament. In both stints, the experience of playing for the franchise has been an excellent one. It’s always good to see some familiar faces once again as I am doing this year, and the way Multan Sultans look after their players has also been superb and makes for a great experience.

PakPassion.net: How much have you enjoyed playing in Pakistan during this edition of the PSL?

James Vince: It’s been a great experience playing PSL games in Pakistan. Obviously, we only played one game in Pakistan last year, but I am glad that we will be playing all our games in the country this year and it’s great to see the passion for the game which I find amazing. In England, cricket is second to football and not far behind Rugby but here in Pakistan, there are cricket fanatics everywhere. To be able to get an opportunity to play in front of such big crowds and passionate fans is simply amazing.


PakPassion.net: What’s it been like playing under the coaching of Any Flower for Multan Sultans?

James Vince: Its Andy’s first stint at the PSL as Head Coach but I have had the pleasure of working with Andy before for the England Lions. He is very nice to play under, is a fantastic coach and has been very successful over his career. It’s great to have someone with his knowledge and experience with us at Multan Sultans.

PakPassion.net: Does playing in so many different Twenty20 Leagues hamper your Test batting abilities in any way?

James Vince: I don’t feel playing in Twenty20 Leagues has any detrimental effect in a player’s ability to perform in other formats of the game. There really is no conflict between franchise-based tournaments and 4-Day or Test cricket as in my case, only when it’s not summer in England, are there opportunities to play cricket in Twenty Leagues around the world. My 4-day and red-ball cricket is therefore played in the English County season only. So, when I finish up from the PSL in Pakistan, I will still have time to go back and prepare properly for the start of the County season back home and get myself in the right frame of mind for the longer format of the game.

PakPassion.net: The target must be to make a comeback in Test cricket for England?

James Vince: I haven’t played a Test for England since March 2018 although I did get into the England Test squad for the series against India in the summer but didn’t get a chance to play. In my career, there have been a few times when I have got to 50, 60 or to 83 when I got run out in Australia and I suppose things may well have turned out differently had I converted those runs to big scores, but that is now in the past. I have had chats with Selector Ed Smith over the last couple of years and it’s clear that my inclusion in the England team will only be through weight of runs. I guess if I do get another opportunity to play for England, it will be down to me to make some big hundreds and re-establish myself. Whether that opportunity comes or not is to be seen. I am 28-years-old and a still have a few years left in me but if I can do well for Hampshire in the County season and do get another opportunity to play for England, then it will be down to me to make some match-winning hundreds and see where that takes me.

PakPassion.net: Tell us about your experience of being part of the World Cup winning squad in 2019.

James Vince: It was a special feeling to be part of that World Cup winning side. The final against New Zealand, as we all know, was incredible. Whilst I wasn’t part of the playing XI on that day, I was fielding during the super-over and to be part of that winning moment was amazing to say the least.

PakPassion.net: Do you believe that by doing well in the PSL, you could improve your chances of finding a place in the England T20 World Cup squad?

James Vince: First of all, let me say that the standard of the PSL is fantastic. There is a lot of really good young talent coming through for Pakistan which is mixed with some excellent experienced overseas players. There is no doubt that the standard of competition is very high during PSL games so if you come here and perform well, it does show that you are doing well as a player. But one has to remember that the current England Twenty20 side is a tough side to get into. Especially as a batter, you will find it tough to make a case for yourself as the current batsmen in the England side have done an outstanding job and almost cemented their places in the team. However, having said that, I am sure that doing well in a high-standard competition like the PSL couldn’t do much harm to your chances of making it into this side.

PakPassion.net: Some say that the current England ODI side is one of the greatest in history.

James Vince: I would say that a lot changed in the England ODI side after the disappointment of the 2015 World Cup. Eoin Morgan has played a massive role in changing the way England have gone about playing One-Day cricket. The terms “aggressive” and “positive” get thrown around a bit about this team but England have backed that up with action. They have consistently played that style of cricket for the past 4-5 years now, so they have definitely built one amazing side and have changed how One-Day cricket is played, which isn’t an easy thing to do in itself. Of course, Eoin Morgan can take a lot of credit for that, but the players have been backed and given opportunities and have in turn shown that they can do well regularly for this side.

PakPassion.net: Can England reach the same heights of success as their ODI side under Joe Root’s captaincy?

James Vince: In my view, the Test side has been in a phase where I don’t think it got to nowhere near the point where the One-Day side was in 2015. There have been some really high-quality players in the past 5 years or so where you had players of the calibre of Alastair Cook and Andrew Strauss before him who were two world-class openers. Then you had the likes of Jonathan Trott, Kevin Pietersen and Ian Bell but since then there has been a bit of a transition with a few players like myself, who have been in and out of the line-up. So, I suppose the challenge now for England is to find a settled team that can do well in Test cricket and give those players consistent chances to do well. I do believe that Joe Root is an excellent Test captain and I am sure we will see more consistent results when the team is more settled. We are already starting to see some guys like Rory Burns at the top of the order who has shown that he is a very good Test opener. We also have Ollie Pope who is the best young County cricketer from what I have seen and he is one of a few cricketers who if given good chances and a long run in Tests under a leader like Joe Root can go on to make England one of the best sides in that format as well.

PakPassion.net: What are your thoughts about The Hundred which will make its debut this summer ?

James Vince: We haven’t had a franchise competition in England yet, so this is very exciting. The Twenty20 competitions in England so far have been good but not every game is televised, and the publicity hasn’t been that great. Also, we have gone from 18 Counties in the Blast tournament to just 8 franchises in The Hundred which is very good. So, the best players from the Blast will now feature in a smaller pot of players where each team of 15 will have 3 overseas players mixed in with the best players in England. This should be an exciting time for English cricket, and it will be interesting to see how this slightly different format which is shorter in duration will fare. The fact is that everyone is excited on the back of what happened in the World Cup and hopefully this competition can attract new audiences and be one that would be great to watch as well.