"It's disappointing to miss the World Twenty20" : Ravi Bopara

Currently the leading run-scorer and 2nd highest wicket-taker in the ongoing Pakistan Super League (PSL), Ravi Bopara is a well known name in the Twenty20 league circuit. He has represented England in no less than 171 games, scoring 3981 runs and has taken 57 wickets.

In an exclusive interview with PakPassion.net, Ravi Bopara spoke about missing out on selection for England's World T20 squad, impressions of the PSL and fellow team-mate Usama Mir, and also looked forward to playing alongside Wahab Riaz in this summer's Natwest T20 Blast. 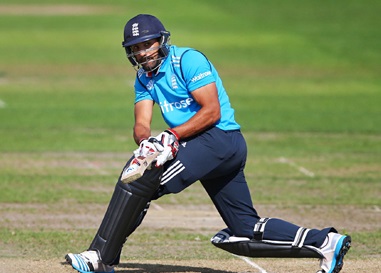 By Saj Sadiq (16th February, 2016)
PakPassion.net : How disappointing is it to have missed out on selection for the World Twenty20?
Ravi Bopara : Yes it's disappointing but England are playing some good cricket at the moment and you can only warrant a place if someone is not doing very well or if someone is injured. By the look of things most people are doing well at the moment so I need to concentrate on performing and keeping myself in the selectors' minds. I just hope the selectors are taking notice of my performances in the twenty over format over the last six months or so.
PakPassion.net : It's surprising to many onlookers that you have not been a regular pick in the limited overs formats for England. Does it come as a surprise to you also?
Ravi Bopara : Look, I've been playing some good Twenty20 cricket for the past few years now, maybe even longer so it's disappointing. I've performed well for England in Twenty20 cricket as well. Just to be in the England Twenty20 squad would have been nice. It's not to be, it's not the end of the world and I've still got time on my side.
PakPassion.net : Several thousand fans in a packed stadium in Sharjah must have been a pleasant experience for you?
Ravi Bopara : Yes it was really nice. We've had some really good support at the Pakistan Super League. Karachi has had some very good support throughout the tournament and the UAE is a great place to be playing cricket at the moment.
PakPassion.net : You seem to be playing with a certain amount of freedom at the Pakistan Super League. Is that a fair assessment?
Ravi Bopara : Yes I think freedom is the way to go. It's nice playing in these twenty over leagues as you can play your own way and you have nobody telling you what to do and all that sort of stuff.
PakPassion.net : What's it been like playing under Shoaib Malik, what's he been saying to you at the Pakistan Super League?
Ravi Bopara : Absolutely nothing. He just tells me to play my way and I feel that's the best way for a captain. He just tells me to do it my way and that's exactly the same message for all of the other players from Shoaib.
PakPassion.net : Do you think the Pakistan Super League can be the breeding ground for future Pakistani cricketing superstars?
Ravi Bopara : Definitely. We've seen what the Indian Premier League has done for Indian cricket where players come up and have done amazingly well and we've also seen it in the Big Bash League. This is generally the way with these leagues where people learn quickly because you have no other choice other than to learn quickly. You are playing against each other in a short format and in a short space of time and if you don't learn quickly you get left behind.
PakPassion.net : You've been in good form at the Pakistan Super League, what do you put that down to?
Ravi Bopara : Everyone has their time. Everyone goes through purple patches and through bad times. In Twenty20 cricket you can be a superstar one game and in the next game get out first ball and get smashed all around the ground. That's the way the twenty over format goes. I just try my best every day, there are no secrets and I just plan to go out there and try my best and do my best.
PakPassion.net : How highly do you rate your team mate at Karachi Kings, the young leg-spinner Usama Mir?
Ravi Bopara : I think he's a fantastic bowler. From the first day we trained together, I realised that he was a good bowler and I knew we had to have this guy in the team. Having leg-spinners in Twenty20 cricket is absolutely crucial.
PakPassion.net : Are you looking forward to having Wahab Riaz in your team at Essex for the NatWest T20 Blast?
Ravi Bopara : Yes definitely. We've been looking for some pace at Essex and he will supply us with that pace. He's a big name in the Pakistani community so that should be good for us and hopefully he will come out there and perform and blow some teams away for us.
PakPassion.net : Do you feel you still have a future in international cricket for England?
Ravi Bopara : Thirty years old is quite young. There are a lot of guys out there playing Twenty20 cricket at the age of forty. So I believe that there is plenty of time left for me to make a comeback and play for England again.
Discuss!