Known for his graceful batting style, David Gower was a left-handed batsman who represented England between 1978-1992 in two hundred and thirty one international games where he amassed over eleven thousand runs. Along the way, he scored twenty-five international hundreds and also had the honour to captain his country, taking them to a memorable victory during the 1985 Ashes.

In an exclusive interview with PakPassion.net, Gower spoke about his memories of touring Pakistan, Mohammad Amir's return to international cricket and Misbah-ul-Haq's importance to the Pakistan cricket team. 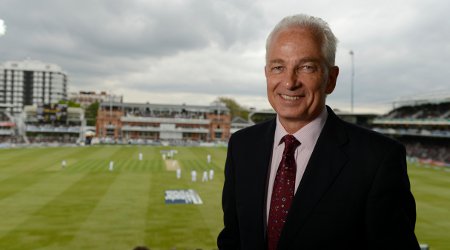 PakPassion.net : As a cricketer who's toured Pakistan, what are your memories of that country, in terms of the culture, as well as the cricket?

David Gower : For reasons known to all, we haven't been to Pakistan either as commentators or players for a long time. I've done both. As a player, I went in around 1984; as a commentator, probably the last time was in 1999-2000. I'm a big fan of Asia as a cultural centre, whether that's Pakistan, India or Sri Lanka; the fact is that wherever we go in Asia, we are always well looked after. I always find it fascinating that there's different things to do, different ways of looking at life, different attitudes to life whenever you travel, that's one of the great benefits of travel. I've always been well looked after and found it very hospitable. It's been fascinating to learn a little bit about what goes on in other countries.

In playing terms, yes, it can be tough. Sometimes you play on really nice, great batting pitches, sometimes it's a bit different. We had some good contests, some close games, some long boring draws. That probably covers most of the range.


PakPassion.net : What in your view makes tours in the sub-continent so memorable?

David Gower : When you're abroad, what I've always found, and this applies to touring any country, either as players or commentators, you need that something which allows you to enjoy what you're doing. Cricket is a great vehicle for this as we're following the game we love and are speaking about a subject we know well. But there are times, when there can be anything less fun such as travel problems, health problems, etc. You need that sense of humour that just gets you through. You need to be able to smile at yourself, smile at other people, draw a few inner reserves and get on and just enjoy it.


PakPassion.net : From your experience of playing against him, how good was Mudassar Nazar?

David Gower : Mudassar made a habit of batting for a long period of time; He also holds the record for the slowest Test match century. I remember him, at Lord's in 1982, basically changing the game by picking up six wickets and helping Pakistan to a ten wicket victory. For an opening batsman who bowled a bit, he certainly became a frontline bowler. He swung the ball and we found ourselves at Lord's with three of us making ducks, and the game going to Pakistan in the closing moments of the day. He was a very competitive man, not to be underestimated.


PakPassion.net : How would you rate Javed Miandad as an adversary?

David Gower : Javed's one of the greats of the game. His record tells you how good a player he was. From a technical point of view, he probably watched the ball more closely than many a batsman, even at the highest level. Brave against fast-bowling, huge competitor. The image of him and Dennis Lillee always sticks in people's mind. Streetwise to many who watched him but underneath it all, a bit of a chuckle. Some of it might have been manufactured, or may have been a necessity of the situation at hand.


PakPassion.net : What were your impressions of Imran Khan as a player?

David Gower : Undoubtedly Pakistan's greatest captain. The iconic win of the 1992 World Cup stands out. Even though England may have been the better side over the course of the World Cup, it was Imran who dragged Pakistan back from the brink of oblivion in that World Cup. Whilst they may have had a bit of luck in that tournament, the Cornered Tiger line is one of the famous lines and from the moment they used that phrase, they got better and better and they peaked at the right moment, which was in the final and that eventually lead to a tremendous triumph. I know England felt they peaked slightly too early, perhaps half a dozen days earlier they were at their best. They were disappointed not to have taken the title and trophy, but all credit to Imran. He is, as you can see now, a statesman of both, cricket and politics.

David Gower : Well, you can ask the same question about West Indies, or Australia or England when they produce the best during particular periods of their history. We all have, across the world, moments where a great bowler appears from somewhere. For England it was Fred Trueman. Dennis Lillee and Jeff Thomson had the same reputation for Australia in the 70s/80s, as did any number of West Indian quicks through the '80s. Pakistan were blessed with Imran Khan, with the likes of Wasim Akram and Waqar Younis making one of the best opening combinations of all time. Before that, Sarfraz Nawaz didn't have the pace, but he was a very canny and skilful bowler. If you're going to be a fast bowler, I suppose there's an element of genetics involved. You need to be hewn from the right rock, you need a certain strength, central physical attributes to bowl quickly. I think in the northern part of Asia, there are certain genes that are favourable to that.


PakPassion.net : Coming to the current series, we've seen Shan Masood, a left-handed batsman like yourself. What areas do you think he needs to work on, regarding his technique?

David Gower : We're speaking after only a few innings of his; I wasn't in the UAE in the winter, but the same thing happened there. It's the eternal problem for a left-hander, roundabout off-stump, which can be a strength and a weakness. He looks an elegant player, he looks like he has time to play, and looks like he has talent. But if you keep nicking it to the slips or the keeper without having made a hundred first, your career will end quickly. It's something all batsmen have to work out, and need to do that to succeed at the highest level. At that level the bowlers do just that little bit with the ball and that makes the difference, making it even more tougher for the batsmen.


PakPassion.net : Yasir Shah bowled exceptionally well at Lord’s and there is a little bit of similarity between him and Abdul Qadir. How do you compare the two?

David Gower : Abdul Qadir was the best I played against. I never got the chance to play Shane Warne, who would've been better I guess, but not necessarily by much. Qadir was a very skilful and a very clever bowler. Yasir has been kept on the sidelines for a lot of his career, but now that he's on centre stage, he obviously loves it. Shane Warne paid him a huge compliment recently. He loves him and thinks he's got all the right things, all the right attributes, all the right 'toys', as he would put it. He thinks he's got one of the best leg-spin deliveries of all-time, which is a huge compliment. The ten-wicket haul during the Lord’s Test was clever because he basically didn't get much help from the pitch but used his own skills to make it hard for the England batsmen. A bit of flight, some deception made it very tough for England's batsmen and as we saw there, a few of them were completely deceived by Yasir’s deliveries.


PakPassion.net : Where do you stand on the Mohammad Amir debate? He's back playing international cricket again. Some people say that he should have been banned for life, others say he's served his time and he's back now, give him a second chance.

David Gower : I always thought with him there were extenuating circumstances which were the situation and the influence on him from senior players. I didn't think it would be fair for him to be treated in the same way as the other two. I think, yes, of course it's a very good point that you need to make a severe example of anyone who is caught doing anything like that, as the moment you're too lenient, other people think that maybe one can get away with this. That's just the human thing. In his case, I think he's done everything right since then; being sent to a young offender's institution for three months was not fun for him, being banned for five years wasn't fun for him. He's been involved in the re-education of Pakistan cricketers and he's been held up as a good example of someone who can get it wrong and be given a second chance, and now it's completely up to him to do the right things for the rest of his career. I'm glad Amir's back, it's good for cricket, for reasons like that, and of course because he's a talent, he can bowl really well and we want to watch him bowl.


PakPassion.net : How would you rate the forty-two-year-old Misbah-ul-Haq who is coming towards the end of his career now?

David Gower : Well, it's a rarity now in the modern game. I was thinking back a couple of days ago, I finished at the age of thirty-five or so when I played my last Test match. He's proved that if you look after yourself and keep yourself fit, work hard enough and have the right mental capacity, you can be good at an age that is beyond most people's thoughts of playing international cricket. You have to go a long way back in history to find people who've made hundreds at Lord's at the same age. Of course, it was a very different era where strength and fitness were a different sort of equation. He's done exceptionally well to keep himself going like this.


PakPassion.net : Misbah-ul-Haq is someone who lifted Pakistan's spirits after the 2010 debacle; he took over the Test captaincy then. He's been a great ambassador for Pakistan cricket, and international cricket. Would you agree?

David Gower : Yes, I do. Pakistan are ranked highly and to achieve that sort of status, something good has to have happened. You do need people to lead. We all know about the ramifications of the 2010 tour. When stories like that break, teams and the whole nation have to think very hard about the situation. It's something which takes a lot of work to eradicate. He's had a big responsibility on his shoulders like that and to get the results they have and bring forth new players and to see the team evolve, I think, is a tribute to his leadership qualities. There's one or two comments from close observers who say sometimes that his tactics aren't all they might be, but captaincy isn't just about that; it's the whole thing.
Discuss!