"I am certain we will bounce back in the next two Tests" : Sarfraz Ahmed

When captain Misbah-ul-Haq likened the presence of Sarfraz Ahmed as "oxygen for the team", he was rightly referring to the courageous attitude of the wicket-keeper-batsman which has made him a key member of the Pakistan Test squad. In twenty-three Test matches, Sarfraz has scored 1399 runs at an average of over forty three and crucially taken fifty catches and is fully expected to play a crucial role in Pakistan's current campaign in England.

In an exclusive interview with PakPassion.net, twenty-nine-year-old Sarfraz spoke about the reasons behind Pakistan's disappointing performance in the second Test match and the lessons learnt from that defeat, his impressions of England batsman Joe Root and expressed his team's determination to improve their performances ahead of the third Test at Edgbaston. 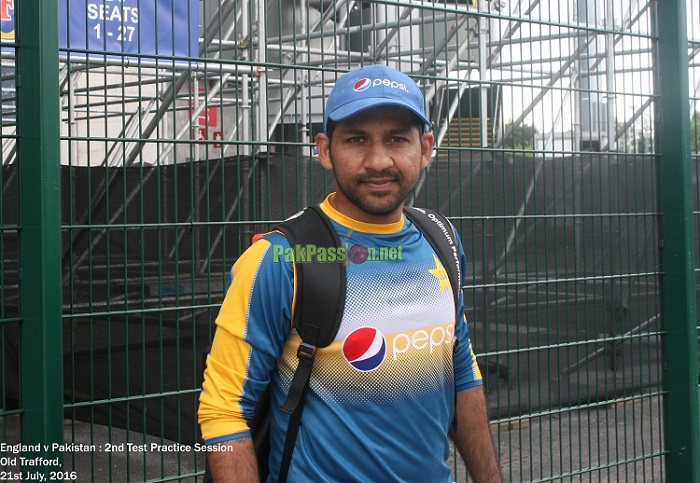 By Amir Husain (29th July, 2016)
PakPassion.net : What do you feel were the main reasons for the heavy defeat in the second Test at Old Trafford?

Sarfraz Ahmed : To start with, we must give credit to England for playing some excellent cricket which resulted in that victory for them. We also made some mistakes in the game which we need to rectify in the coming days before the next Test match at Edgbaston. We intend to study those mistakes during our practice sessions and then not make them again.


PakPassion.net : What mistakes do you feel Pakistan made at Old Trafford?

Sarfraz Ahmed : Although the pitch had some help for our bowlers, we were unable to bowl in the same manner we did against England at Lord’s. Also we have to understand that in English conditions, any team batting first and putting up a reasonable score automatically gets the upper hand in the game. Also, the fact is that we failed to click in both batting and bowling departments. This is unlike how our batting, bowling and even fielding came good at the Lord’s Test not too long ago. However, as I said, we will work on fixing these problems and make a strong comeback in this series to make it 2-1 in our favour.


PakPassion.net : Do you agree that Pakistan’s current Test team structure seems to be geared towards batting first?

Sarfraz Ahmed : This is not the case in my view. Our Test team has been performing very well for the past four or five years and that is also reflected in our current high ranking. We have won games in the past with our batting and bowling with a similar combination. Not only has our batting succeeded in the past but our bowling has defended totals very well in the past as well.


PakPassion.net : It seemed like the Pakistan team's morale looked a little low during the second Test compared to how they looked during the Lord’s Test?

Sarfraz Ahmed : When things are going well for you as a team then the morale is naturally high. But when the opposition puts on close to six hundred runs then any team will feel a little low. To be honest, the team was still trying its best even in the face of such a high first innings total but unfortunately things did not go our way and really we must give credit to the England team for their performance.


PakPassion.net : How difficult is it for any team to recover from such a comprehensive defeat?

Sarfraz Ahmed : It is always tough to make a comeback after a defeat of the kind we suffered recently. What I will say is that we have put in a lot of hard work and preparation for this tour with a boot camp as well as a training camp in Lahore. I am confident that after a short break between the Test matches, we have the ability and will make a comeback in this series, God Willing.


PakPassion.net : What sort of changes do you feel can Pakistan make to their strategy for the third Test?

Sarfraz Ahmed : We will consider all options once we get close to the third Test and have had a look at the conditions at Edgbaston. As far as minor technical changes are concerned, these are always possible during series as we deem fit. Of course major technical issues cannot be resolved during the ongoing series. Like I said, we will consider what changes need to be done once we have reached Birmingham and have had a sight of the pitch.


PakPassion.net : How much of a concern is the dip in form for Younis Khan for the Pakistan team?

Sarfraz Ahmed : Younis Khan is one of our main players without doubt. Apart from Younis, we have been winning with the likes of Misbah-ul-Haq, Azhar Ali and Asad Shafiq for the past few years and we cannot write off any of these players based upon a few bad innings. Younis Khan not only works hard on his fitness and in the nets, he is also a great source of inspiration and strength for the team. I am convinced that he will make a comeback just like in the past when he’s come through for Pakistan with a big innings when his team needed it most.


PakPassion.net : Are you concerned about some of the criticism aired on television by former players who were conspicuously quiet when Pakistan won at Lord’s?

Sarfraz Ahmed : We have to understand that all of these ex-players have served our country with honour in the past. They are simply pointing out some of our failings and we must not take that to heart as this will not be to our benefit. We have to take such thoughts in a positive manner and not take them negatively. If we consider such advice in a negative light, then that will sit at the back of our minds and hinder our progress. The ex-players are speaking from their experience and it is up to us as players to note their advice and implement those recommendations.


PakPassion.net : How do you explain the fielding lapses in the Test series so far including some dropped catches by yourself?

Sarfraz Ahmed : There is always pressure on players when they are fielding in an international game but mistakes can be made by anyone. No one misfields or drops a catch deliberately. There are some issues such as the slopes in the field which we are not used to or windy conditions that cause deviation in the trajectory of the ball as well. This is another aspect that we are working on and you will see a better fielding display in the upcoming games.


PakPassion.net : Is the display of attacking and aggressive batting against Moeen Ali a deliberate ploy?

Sarfraz Ahmed : Let me start by saying that we generally try and play in a positive manner and to score against balls which need to be put away. Now England are playing with four front-line bowlers and if one of the bowlers bowls a long spell then it is clear that he will not come on to bowl again for a little while. In such a situation, when Moeen Ali comes on to bowl, our batsmen will want to make use of this opportunity. Having said that, they aren’t attacking every delivery but playing each ball on its merit. Moeen Ali is no ordinary bowler as he did claim the wickets of some of our top batsmen at Old Trafford but I will stress that we did not in any way plan to hit every ball from Moeen; our strategy was the same as it was against all other bowlers.


PakPassion.net : How do you rate Joe Root as a batsman?

Sarfraz Ahmed : We are all very impressed by Root’s batting in both Test matches so far. He must be appreciated as some of his shots against good balls even put doubts in the minds of our bowlers. He is a batsman with an excellent technique and when he plays those shots, any bowler would feel demoralised. It was his batting in the second Test which made the difference and took the game away from us.


PakPassion.net : How can Pakistan deal with Joe Root and Alastair Cook, as they appear to be the main threats?

Sarfraz Ahmed : This is foremost in our minds. These two are key batsmen for England and we will plan to take their wickets early so as to put pressure on the rest of the batting line-up. Rest assured that our coaching staff will be putting a lot of stress on this objective for the next games.


PakPassion.net : In a recent interview with us, Inzamam-ul-Haq has said that there is no need to panic and that Pakistan can make a comeback. Do you agree with those sentiments?

Sarfraz Ahmed : Absolutely agree with what Inzi Bhai has said. There is no need to panic at all. The series stands at 1-1 and it is as competitive as it gets. The series began with a bang and from what we have seen so far, this is a tough fight. We are a strong side and our coaching staff are committed to helping the team respond well in the next two games. I am certain we will bounce back in the next two Tests.
Discuss!