"Virat Kohli is a batsman who I respect and admire" : Sami Aslam

The world of cricket took notice of a twenty-year-old Sami Aslam when, in a surprise move by the Pakistan team management, he was picked to open the batting for the crucial third Test match against England. Whilst he ended up on the losing side in that match, with two splendid innings of 82 and 70 played under immense pressure Aslam announced his arrival in Test cricket, earning unconditional praise from experts and fans alike for his composure and technique.

In an exclusive interview with PakPassion.net, Aslam recalled his memorable innings at Edgbaston in face of intense pressure from the England bowlers, the advice he has received from Grant Flower regarding his batting and spoke about how watching Alastair Cook and Joe Root batting had helped him. 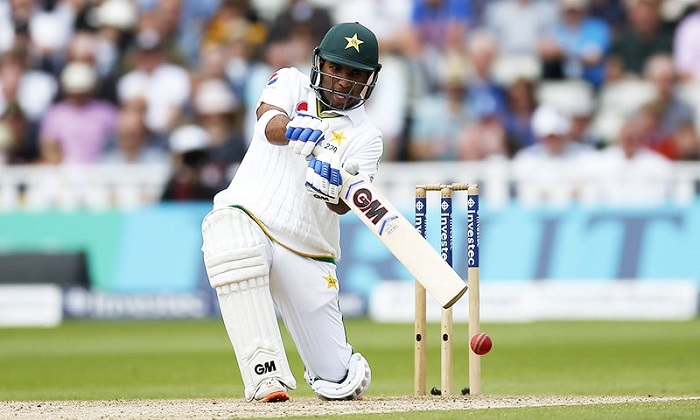 PakPassion.net : When did you know you would be playing in the third Test match at Edgbaston and what was your reaction?

Sami Aslam : Two days ahead of the match at our first practice session in Birmingham, I was told that I would be playing in the third Test match. I'd be lying if I said that I wasn't nervous when I was informed that I was playing at Edgbaston. I think anyone in that position would have been nervous when they were told. But, I was also very excited and my immediate thought was that I was being given a chance to perform and I needed to grab that chance with both hands.


PakPassion.net : It was your first Test match outside Asia and that too against a top team. When you walked out to bat at Edgbaston, what was going through your mind?

Sami Aslam : My preparations had gone well leading up to the match at Edgbaston. I knew I was up against some of the world's best bowlers and I had to be strong in the heart and in the mind. I knew that if I let nerves get the better of me then I wouldn't be able to perform. I didn't even think about any score, I didn't have a target score in mind and my focus was just to go out there and give 100% and just do my best.


PakPassion.net : You lost your opening partner Mohammad Hafeez quickly in both innings at Edgbaston, did that unsettle you or put you under more pressure?

Sami Aslam : No it didn't, really. Once you are out there you have to prepare yourself for all eventualities and whilst it was a blow to lose an experienced player like Mohammad Hafeez early in both innings, I felt that I had to play my natural game and not let the early wicket unsettle me or cause me to change my approach.


PakPassion.net : That first Test century was there for the taking, wasn't it?

Sami Aslam : Yes, definitely. My dismissal came at a time when I was scoring quite freely and batting with confidence, which made missing out on the hundred even more frustrating. I guess it's part of the game, these things happen, but it hurt, it hurt a lot. It was a mistake in the running between the wickets but these things happen and hopefully more opportunities to make international hundreds will occur in future.


PakPassion.net : Your calmness and composure at the crease belies your age and experience. Is that something that you have worked on or does it just come naturally to you?

Sami Aslam : What you practice and learn is what you apply at the highest level. If you are calm and composed whilst batting in practice sessions, then you bat the same way in the middle. When I was dropped from the Pakistan team, I went away and looked at what I needed to work upon and improve on. My aim was to do at international level what had worked for me in domestic cricket. You sometimes learn more from sitting and watching when you are dropped and not in the starting eleven. I have watched and learnt how some of the best players apply themselves and what they do well to be successful. I'm a calm person away from cricket and I think that helps too. I'd also like to thank Grant Flower for all of his advice which has really helped me.


PakPassion.net : What has Grant Flower specifically been working with you on ahead of, and during this tour of England?

Sami Aslam : Sometimes minor adjustments can make all of the difference and Grant looked at my batting and he felt that I needed to make a few slight changes to make my batting be more suitable for conditions in England. His main message to me was you have all the shots, you can become a very good batsman, just bat like you do in practice when you are in the ground in a match situation. He also mentioned my calmness and composure and said that I should use that to my advantage as it will stand me in good stead in future.


PakPassion.net : Your judgement of your off stump resulted in some excellent leaves which brought high praise. Would you say that is also another big strength of your batting?

Sami Aslam : Definitely, especially in English conditions where the ball can swing and seam around. You have to know where your off stump is or you can get into a real tangle. This is another area of my batting that I have worked on; the 4th or 5th stump line and ensuring that I don't play at such deliveries especially early in an innings. Once you are set at the crease then there is the opportunity to play more shots but my philosophy is to be cautious at the start of an innings. This was a big area that we focused on ahead of the Test series against England and I think it was an area of my batting that went well.


PakPassion.net : It seemed like some of the England bowlers were getting a bit upset with a young, rookie batting so well at Edgbaston?


PakPassion.net : Your batting game plan seems simple yet effective. Surely an uncomplicated approach to batting is the best one?

Sami Aslam : I've watched a lot of Alastair Cook and the way he bats. His style is simple yet so effective. Look at his record, it's phenomenal. He bats according to his strengths and plays the shots that he feels comfortable in playing and that works for him. This is exactly my approach. Why play shots that you don't feel comfortable playing? There is so much time to bat in a Test match and there is no need to rush and go for silly shots. Bowlers are looking to expose your weaknesses so I think as a batsman, it's best to stick to basics and what you are good at, rather than trying something too extravagant or flashy which will only land you in trouble.

I've got all the shots off the front foot and the back foot but I like to be cautious especially at the start of my innings. I think you have to bat within your limits at the start of an innings and build an innings.


PakPassion.net : Is Alastair Cook a batsman who you have modelled your batting on?

Sami Aslam : Alastair Cook and Joe Root are two batsman who I admire. I have watched a lot of their batting, especially at Lord's and Old Trafford in the first two Test matches and I looked at their batting and why they are so consistent. Watching their approach and how they build an innings was very fascinating. I think it's very important to learn from opposition players especially world-class performers like Root and Cook.


PakPassion.net : I've also heard that you are an admirer of Virat Kohli's batting?

Sami Aslam : Again, the word consistency comes to mind. He is someone who every time he goes out to bat, plays in a manner as if his life depended on it. Every innings is played with the same determination as the previous one and nothing is taken for granted. Look at his rankings in all formats and you will see what a great batsman he is. Out of 10 innings, he is likely to succeed in 8 or 9 of those innings and that is just incredible. Virat Kohli is a batsman who I respect and admire.


PakPassion.net : What do you feel makes a good opening batsman?

Sami Aslam : Confidence is key. Facing the new ball is an art and for that you have to have a good defence. You have to be able to lead from the front. I believe that openers set the tone for an innings and if a team's openers do well then that lays the foundation for others in the team to bat well. A successful opening batsman has to have the ability to bat through an innings and guide the other batsmen around him.


PakPassion.net : I guess there's still a lot to learn and improve upon for you in the coming years?

Sami Aslam : Absolutely. I always recall Sachin Tendulkar saying that even when he played his last Test match, he was still learning and trying to improve. I have lots to learn and that comes with experience and hopefully from playing around the world. In any job, you are constantly learning and with good mentors around me, that should not be a problem. The opposition is watching videos of you all of the time to work on your weaknesses, so as far as I am concerned I have to counter that by looking to continually improve and work on my skills. Complacency can be a problem. You make some runs and a few good innings and it can be a problem, but you have to ignore that complacency and ensure you don't take things easy and become lazy. If you improve and work hard, you will do well; if you don't improve and work on your weakness, I believe you will not progress.


PakPassion.net : A lot of openers have been tried by Pakistan since the great duo of Saeed Anwar and Aamer Sohail. Do you feel you are the real deal or like some of the others, someone who will play some matches and then be forgotten about?

Sami Aslam : I believe I have had a very good grounding with my Under 19 record and a good start to my international career, but I am not going to get complacent and think international cricket is easy. I have some big targets and want to achieve them. I want to serve Pakistan cricket for a long time and I want to break a few records also, but it's early days yet and just the beginning. It's a long road ahead of me and one where I have to put in a lot of hard work and I have lots to learn.


PakPassion.net : You've also made the current Pakistan One-Day squad; is playing in all formats for Pakistan a realistic proposition?

Sami Aslam : Yes, definitely. At Under 19 level, I had a very good record in the fifty over format and my strike rate was very good at that level. I carried that onto domestic cricket and I think that I can be successful in the limited over formats for Pakistan when given the chance.


PakPassion.net : And finally, what's it like to be part of the number one ranked Test squad?

Sami Aslam : It's amazing. Nothing can be as good as this. It feels incredible. A lot of the credit should go to Misbah-ul-Haq who took over the captaincy in 2010 when things were very bad for Pakistan cricket and he has lifted the team to the top ranking. To be a part of this is just incredible.
Discuss!