Marked for future success by many who have followed him from a young age, Hasan Ali finally made his international debut at the age of twenty-two against Ireland last month. Whilst he remained wicket-less in that game, Hasan later reinforced his credentials in the Limited-over formats against England in four ODI games where he took eight wickets and further demonstrated his utility to the Pakistan side by taking two wickets in the one-off IT20 game at Old Trafford.

In an exclusive interview with PakPassion.net, Hasan spoke of his experience of playing against England, his impressions of working with Mickey Arthur and Azhar Mahmood and his aspirations for the future. 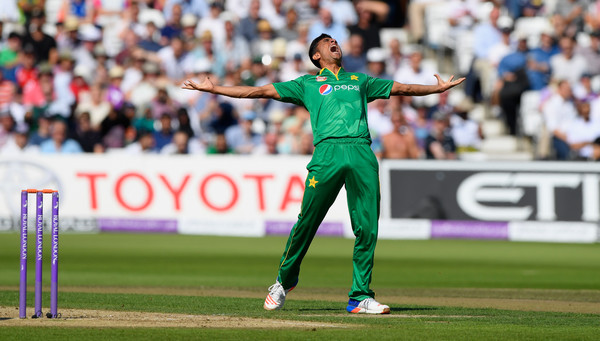 By Amir Husain (15th September, 2016)
PakPassion.net : Tell us about your experience of playing ODIs and the IT20 in England this summer.

Hasan Ali : It was a great experience. As a player starting off my international career, it was an excellent opportunity to learn from the best guys in the game and I was extremely pleased because I was given a lot of confidence and advice by all our senior players. I would like to thank Azhar Ali and Sarfraz Ahmed for encouraging me throughout the series, in fact all of the seniors went out of their way to make me feel at home which was really nice.


PakPassion.net : In the series against England, you seemed very calm and composed; almost like you had been playing for Pakistan for many years?

Hasan Ali : I suppose this is all down to many years of training where we are told to not worry about pressure and I do thank the Almighty for His help in letting me perform well in these games. There was some pressure put on me by the England players as they knew I was new to international games but I was expecting that and did not waver and bowled to the best of my abilities.


PakPassion.net : Your bowling seemed very suited to English conditions; was that made easier given that you had been touring England with Pakistan A before being called up by Pakistan?

Hasan Ali : There really is no substitute for hard work in any part of one’s life and it was the same for me in England, even though conditions were better for bowling there. What helped me was the earlier tour with Pakistan A where I did well and also got to know the wickets to some degree. Obviously the A tour, where I picked up twenty wickets in eight games, did wonders for my confidence and I am sure it reflected in how I bowled later on behalf of the senior team.


PakPassion.net : That last over that you bowled at Trent Bridge was so good, but what was really going through your mind with the team already having conceded 438 runs before that point?

Hasan Ali : No specific instructions were given but the obvious goal was not to allow further damage. All our bowlers had come under attack by the England batsmen and the idea was to do what I could to stop that in the last over. As a bowler, you always have a clear picture in your mind about how you will bowl the next few deliveries. In this over, I had to try different deliveries as I could see what Jos Butler and Eoin Morgan were trying to do and I suppose my strategy came off for five balls at the least.


PakPassion.net : We did see a few varieties of your slower balls in that one over; how many do you have in your armory?

Hasan Ali : I am pretty confident about bowling three or four different types of slow deliveries for which I am very grateful to my coaches. One has to realise that today’s game whether it’s the 50-over, Twenty20 formats or even Test matches are all played in a different manner to what it was like in the 1980’s or 90’s. On top of that, we have new regulations about field restrictions so it is now a necessity for a bowler to have these types of deliveries up his sleeve to be able to be effective.


PakPassion.net : What was it like to work under the supervision of Mickey Arthur and Azhar Mahmood?

Hasan Ali : I really enjoyed working with Mickey Arthur. He is an excellent coach who gave all of us clear and concise plans to work with. There were no problems with communication as I do speak and understand enough English to be clear about what was needed from me. In any case, Mickey made sure that we all clearly understood what he was saying.

The same was true for Azhar Mahmood who gave me some very important advice for use during the series and I do hope to work with him on an ongoing basis as his help to improve my bowling was invaluable. I know people may think that there isn’t enough time during the series to make changes to one’s bowling technique but that is not correct. We have enough time between games during practice to learn and this is where Azhar was great as he would stand next to me when I was bowling to observe and then demonstrate himself what he wanted me to do which was very helpful and made a big difference for me.


PakPassion.net : You have had a meteoric rise from the Pakistan A tour to now playing for the senior team. How does it feel to be recognised as a famous sportsman?

Hasan Ali : It’s an amazing feeling, to tell you the truth. To play for Pakistan was a dream come true but it did not come without lot of hard work. I was fortunate that apart from help from The Almighty, my elder brother Atta-ur-Rehman was also someone I depended upon and who has always helped me to get to the point today. The aim is to continue working with sincerity and help achieve greater glory for Pakistan.


PakPassion.net : What was it like playing at Old Trafford with some unbelievable support for Pakistan?

Hasan Ali : I cannot describe the feeling of playing that day. It was great as most of the crowd seemed to be supporting Pakistan. For that, I would like to thank all those who not only cheered for us during the game but even those who were at our hotel and waited around our team bus. I know that many stayed back once the game had ended and believe me we thoroughly enjoyed their presence. I hope they all enjoyed the game as we really appreciated their support.

Whilst I was glad to see so many of our supporters at Old Trafford, there was a part of me which felt sad to think that we are missing such scenes back home in Pakistan. I pray that the Almighty makes conditions favourable for us to play back home in front of our own crowds. Our beautiful stadiums need to see international cricket again and our people who are mad about this game deserve to see their top and talented players perform in front of them. God willing, I hope this will happen one day soon.


PakPassion.net : You bowled at good speeds but can we expect this to improve further in the near future?

Hasan Ali : During the tour, I was consistently bowling between the 80-85 MpH mark. Obviously playing at the international level has highlighted some areas of improvement for my bowling. This is something which I am working on and I am hoping for my speed to improve as time goes on. The coaching staff are excellent and they are giving me special training to improve on this aspect and I am expecting to increase my pace further in the near future. In this respect, I have been given a special diet and training plan which I will follow and we should see an increase in my pace.


PakPassion.net : Your batting was rather disappointing in this series; Are you looking to improve on this aspect of your cricket?

Hasan Ali : Yes, I was a little disappointed with my batting during the recent matches but the good news is that I am now working very hard to improve on that. Grant Flower is advising me on this and I do hope that I can impress everyone with my batting skills in the future.


PakPassion.net : Looking ahead, where do you see yourself in the coming months and years?

Hasan Ali : My aim for the future is to continue at the same level of hard work I have been doing and to maintain my fitness. I would like to play for Pakistan in future World Cups and not only put in my best there but also help Pakistan win a World Cup as well. Whilst I am happy to play for Pakistan in all formats, there isn’t any doubt in my mind that I want to be known as a good Test player. Of course, whether I get selected to play Tests is based upon my performance but I am convinced that the only way to prove oneself as a good cricket player is by excelling in Test cricket.
Discuss!