"I believe that Islamabad's experience will be vital in the PSL" : Saeed Ajmal

Once Pakistan's go-to bowler, Saeed Ajmal still has hopes of an international recall after remodelling his bowling action following an ICC ban. An integral part of the Islamabad United PSL title-winning squad, Ajmal spoke to PakPassion.net about Islamabad's chances this time around, the key players for Islamabad and his hopes that a strong performance in this year's tournament could earn him a Pakistan recall. 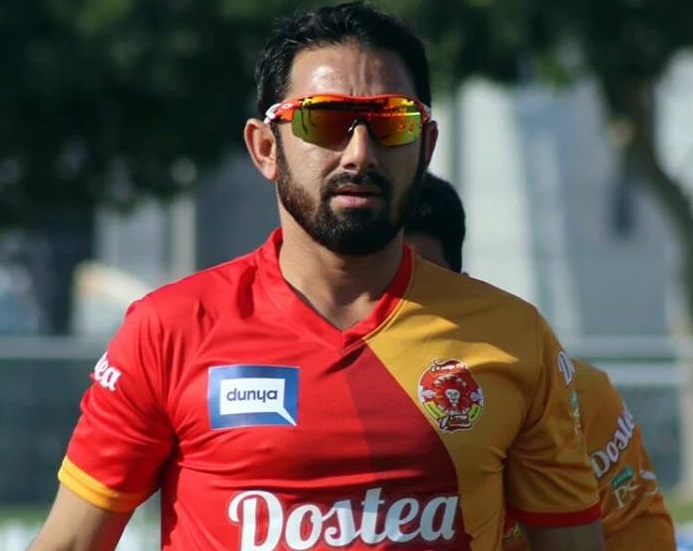 By Amir Husain (7th February, 2017)
PakPassion.net : Islamabad United were the champions in the inaugural edition of the PSL but can they repeat that performance in 2017?

Saeed Ajmal : In 2016, there weren’t many people who rated us that highly. Not many could even imagine that we could go all the way in the opening edition of the PSL. However, what they didn’t realize was that Islamabad United was built upon the experience of some seasoned campaigners. All we needed was that one spark to send us on our way to the top. That spark came in our victory against Karachi Kings, after which our morale got a boost and we made a comeback of sorts in this tournament. We then continued to perform well throughout the knock-out stages where we won all our games. Now almost the same squad is playing again this year except for Andre Russell who has been replaced by Steven Finn. Of course, losing Russell is a big blow to us but I am happy that in Finn we have an excellent replacement. In general, our strategy is to pick a good pace attack given that most local players aren’t that confident playing fast-bowling and we hope that this will give us success.


PakPassion.net : You mentioned Andre Russell's absence in this year’s PSL but this surely is a huge loss for Islamabad and may affect their chances this year?

Saeed Ajmal : Yes, without doubt Andre Russell is a top performer but so too is the man we have brought in as his replacement. Finn’s performances for England have been excellent so whilst we will feel the absence of Russell, we think we have a bowler in his place who is also of a high quality. One thing about our team you should know is that we play with our full energy and come together as a unit. From our experience, we understand that there are ups and downs in a game of cricket but we put in the effort that is needed and leave it to the Almighty to decide the result.


PakPassion.net : The Islamabad United squad has a few older players and given the number of fast-paced Twenty20 games in the PSL, will fitness be an issue?

Saeed Ajmal : Fitness is a key component in this form of cricket which is very fast-paced and it is possible to get a few niggles during a tournament like the PSL. I accept that we have a few players who are older but what makes a difference is the wealth of their experience. The ability to handle pressure in a Twenty20 game is what is important and this is what our older players can do with ease and win matches. From our captain to all of our junior players, we have been through some tough games in domestic cricket and along the way we have learnt a lot. Twenty20 cricket is a tough format for sure but only those who can handle the pressure and hold their nerves can play this type of cricket. I believe that our experience will be vital in the PSL.


PakPassion.net : Are you looking forward to renewing your bowling partnership with Samuel Badree?

Saeed Ajmal : Badree is one of the top Twenty20 bowlers in the world and even I have been the number one ranked bowler as well. Our partnership has been excellent in the past but let us also not forget that we have some youngsters as well as Imran Khalid who is a seasoned spinner. What we then have is a balanced spin and fast-bowling attack with Mohammad Irfan there supported by Mohammad Sami and Rumman Raees as well. All in all, this is a balanced side but remember that in Twenty20 cricket you can have the best squad but only the side that plays well on that day can win the game.


PakPassion.net : What’s it like to be in the same squad as Mohammad Irfan and Steven Finn?

Saeed Ajmal : To be honest, with both Irfan and Finn in the Islamabad squad there is a real danger that us shorter guys will end up with neck stiffness if we have to keep on looking up to talk to them.


PakPassion.net : Tell us about Sharjeel Khan and his improvement as a player as well as his importance to Islamabad United?

Saeed Ajmal : Players like Sharjeel are absolutely important for any Twenty20 team as they have the ability to score quick runs in the first six overs in the power-play period. If a team can put up some quick runs in the beginning, then it immediately puts the pressure on the opponents. In this way, if Sharjeel can stay for five or six overs and helps put up a quick 70-80 runs for the team, then not only do we put pressure on the bowlers but we also end up with an above average score. Our spin and fast-bowling attack can then take over and defend that total with ease. This is exactly why our captain Misbah-ul-Haq and coach have chosen players in our squad who are proper batsmen and bowlers. Our preference is not to have too many all-rounders in our team. We feel that someone who is a specialist is very important to have in your team as in a Twenty20 game, even one bad over can change the complexion of the game.


PakPassion.net : You must be looking at good performances in the PSL as a means of making a comeback in international cricket?

Saeed Ajmal : I am always ready to play in international cricket and it really depends on the board and the Chief of Selectors whether they wish to include me in any future squad. I am ready in terms of skills and my fitness is in excellent condition. You must remember that I was the top wicket-taker in the National T20 Cup with twenty wickets. Unfortunately, I haven’t played any games since then. The fact is that whatever cricket I have played after clearing my action, I have done very well in it but then if I am not given chances to play then how else can I prove my worth? How else will I get confidence if I don’t play in games? And on that matter of not having confidence, do people think the years I served Pakistan cricket in the past were done without confidence? Do they want me to play when I am fifty years old? I am not clear what is expected of me but it seems that everyone is getting a chance with the exception of Saeed Ajmal.
Discuss!