"The talent in Pakistan is phenomenal" : Brendon McCullum

Appointed as the captain for Lahore Qalandars for the 2017 edition of the Pakistan Super League (PSL), Brendon McCullum is expected to bring his vast international experience to help his team lift the trophy. Having retired from international cricket, McCullum's outstanding record of scoring over two-thousand runs at a breathtaking strike rate of one-hundred and thirty six in T20Is is something the Lahore based franchise will be banking on. Coupled with his experience at helm of the New Zealand team, the thirty-five-year-old McCullum is expected to be one of the top-rated players in this edition of the PSL.

In an exclusive interview with PakPassion.net, the Lahore Qalandars captain spoke on a variety of topics including feelings about his participation in the PSL for the first time, the difference in captaining a side between Tests and Twenty20 games, Umar Akmal's potential as a match-winner and his hopes of leading Lahore Qalandars to a tournament victory. 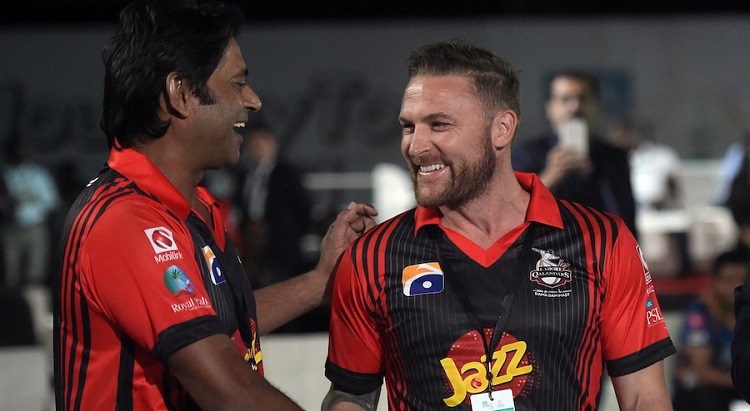 PakPassion.net : Do you have any regrets about retiring from international cricket?

Brendon McCullum : I have absolutely no regrets at all about retiring. I had a great time playing international cricket but then like everything else in life, good things must come to an end. The timing of my retirement was right for the team and it was a good point for myself to move on, and for someone else to take over captaincy. The new captain, Kane Williamson, was definitely the right man for the job and he's done a great job already so far. Its also a great feeling to support New Zealand from afar as well.


PakPassion.net : You must have been happy with the outcome of the recently concluded New Zealand versus Pakistan Test series?

Brendon McCullum : Yes, I thought they played outstandingly well. But then this seems to be the way at the moment in international cricket; teams at home are incredibly difficult to beat and that's exactly how it happened with Zealand at home to Pakistan. New Zealand have been very successful so far this summer and they're really beginning to understand the style of play with which they want to operate with. What is also pleasing for me is the way Kane Williamson is really growing into the role; he's brought his obvious professionalism and consistency to it too.


PakPassion.net : Are you looking forward to playing in the PSL for the first time?

Brendon McCullum : Yes, frankly I can't wait for it to start. It's the first time I've been involved in the PSL. I've been here for around a week and have got to meet the guys and have got to know the squad members pretty quickly. It's been a cool environment to be a part of, so far. We can't guarantee success but we certainly are going into this tournament with the right team spirit and have most boxes ticked in terms of our preparation, so let’s see how we go in the coming days.


PakPassion.net : What, in your view, are the qualities of a good captain of a Twenty20 team?

Brendon McCullum : I do believe that you need to be true to your style of play in your captaincy. Everyone skins it slightly differently. So some captains like to be really methodical and thorough in terms of their consistency while others prefer to be more dynamic and depend upon their instincts. I try to make sure the guys have a good time and work with the management group and senior players to allow them to an opportunity to express themselves on the cricket field and develop at their own pace, and try and hopefully create some good memories as a team.


PakPassion.net : Do you find a big difference between captaining a Test side versus a Twenty20 side?

Brendon McCullum : The main difference is in the pace of play and the level of risk you must operate at to win such games. Twenty20 cricket forces you to operate at a higher intensity and has a level of risk which is something I love that about playing these Twenty20 leagues. You're constantly making decisions and taking educated gambles in the hope that, at the end of the game, these calls allow your team to come out on top. It's completely different from Test cricket but you still require the ability to understand where the game is going and try and stay in front of it.

Test cricket, on the other hand, has an element of thoroughness and requires longer planning in terms of your strategy. Twenty20 is good fun and it's not just on the field, but the environment off the field; the language you talk and discussions you have with the players needs to be consistent. You need to try and allow them to have a good time, play with freedom and go out there and push the envelope and display their skill-set which will allow them to perform at their best.


PakPassion.net : You've had a chat with some of the younger players in Lahore Qalandars squad. Does anyone stand out for you as an exciting prospect to watch out for?

Brendon McCullum : Yes, I have had a chance to look at the newer players and I would say that Fakhar Zaman is very good and he looks outstanding. I'm looking forward to seeing him making his presence felt in the tournament.

It’s been incredibly exciting to watch these players in the warm-up nets we’ve had so far. There are a lot of guys in the squad who are good and to me that is because the talent in Pakistan is phenomenal and that is why this competition is so great. It allows the talent in Pakistan and not just the top names, but the next tier as well, opportunities to play on the big stage with international players and under the spotlight in such a big tournament. Competitions such as the PSL can really grow the home-country’s players as we have seen in other countries as well. A good example is the player development program for Lahore Qalandars from which we have seen players coming through and getting a chance to play at the big stage which is a pretty exciting prospect.


PakPassion.net : Umar Akmal is an amazing batsman but everyone feels he's underachieved in international cricket. Why is that?

Brendon McCullum : He's still a young man and there's a lot of cricket left in him. The best years of a batsman are normally after he turns thirty. He may not always be the most consistent of cricketers but he has the ability to single-handedly take the game away from the opposition. He's that sort of player but it takes great courage to play like that. If he feels he has the backing and support of those around him, I think you'll see him take his game to the next level. He's an incredibly talented cricketer and I know that he is desperate to perform in this tournament.


PakPassion.net : UAE has been a happy hunting ground for you in the past. Do you expect to take that confidence forward into this tournament?

Brendon McCullum : All you can do is try and repeat that type of performance in this form of the game. Fact is that you can't guarantee anything but what you can do is to turn up with confidence in your own game and with the right attitude. You try and keep things as simple as possible and hopefully your performance will flow off that belief. Let’s wait and see how it goes in the UAE as it will be interesting to see what kind of wickets we play on. That in turn will be a big determining factor in terms of the style of cricket we play during this tournament. I also hope to make some contributions along the way as well.


PakPassion.net : Have there been any discussions with your squad about what you need to improve upon from last year’s rather dismal showing in the PSL?

Brendon McCullum : We have to accept that Twenty20 is such an inconsistent game that just one or two balls or runs can determine whether you go on to win a tournament or finish last. From talking to the guys, small margins were the reasons why we finished where we did last year. We weren't too far away so we don't need to try and reinvent the game, it's just a matter of trying to remain true to how we want to play. I think looking at the players we've recruited, it's pretty obvious as to the brand of cricket and how we want to be playing.


PakPassion.net : Do you think Lahore Qalandars have it in them to reach the finals of the PSL 2017?

Brendon McCullum : Yes, we can and that is what we are here for. But then there are four other teams that are also pretty keen to win it as well so we're respectful of that. Those teams have some outstanding cricketers, both globally and internationally as well. As for us, we'll be well prepared and function as a tight unit on the field and off it as well. We'll give it our best and hopefully things will happen to our satisfaction.
Discuss!