"The PSL can only get bigger and better" : Chris Gayle

Regarded as one of the most popular players in the Twenty20 format, Chris Gayle has been blazing his way to glory since his international debut for the West Indies in 1999. He captained the national Test side from 2007 to 2010, has achieved the rare feat of scoring two triple-tons in Tests and holds the record of being the first batsman to have scored a double-hundred in a World Cup tournament. His free-flowing batting style in the shortest form of cricket has also seen him amass over fifteen-hundred runs in fifty T20I appearances as he continues to entertain fans around the world.

Now part of the Karachi Kings at the Pakistan Super League, Chris Gayle spoke exclusively to PakPassion.net where he discussed how he draws his inspiration to play at this age from Misbah-ul-Haq, his desire to play Test cricket for the West Indies, the continued success of the PSL as it enters its second edition and looked forward to a successful tournament despite a poor start by the Karachi Kings. 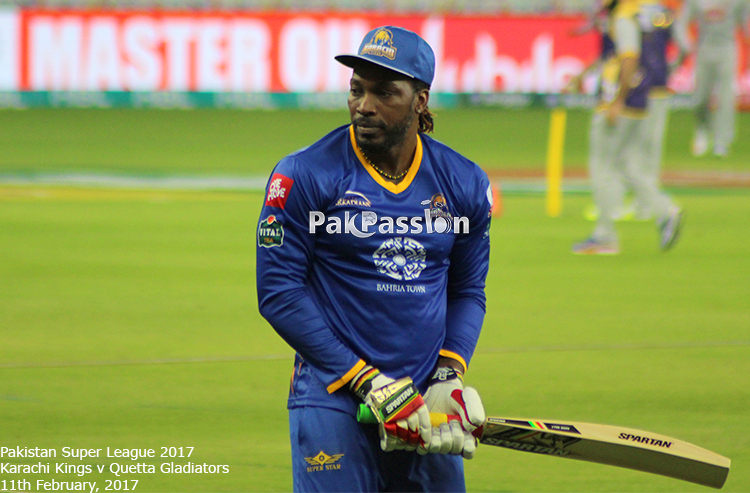 By Amir Husain (15th February, 2017)
PakPassion.net : You are now thirty-seven-years-old, how many more years has the 'universe boss' got left in him in cricket?

Chris Gayle : That’s right to call me that if you like! I am thirty-seven-years old and looking forward to playing maybe another two years or more, if I am being honest with you. As long as the body holds up and is treated properly, then I will see how long I can go on and entertain the fans as much as possible. At the same time it depends on how I feel and I if I can keep enjoying the game, then that will be another plus point. That’s the kind of frame of mind I am in now and hoping to get through some of these phases caused by recent injuries. Once I have my fitness back, then I will be all set and ready to go on even further.


PakPassion.net : So do you draw inspiration from Misbah-ul-Haq’s presence in essentially a young man’s game?

Chris Gayle : I draw inspiration from Misbah; let me tell you, Misbah is not old, he’s still young and fresh! Seriously speaking, his participation in the PSL shows that if your body is in good shape, is fine-tuned, then you can go on as for as long as possible. Misbah is an inspiration to players like me as well. I am thirty-seven so Misbah’s career tells me that I have about five more years in me at least. Apart from Misbah, we also have the example of Younis Khan who is still playing so I guess it all depends on how your body feels. With both Misbah and Younis, as long as they are fit and given their experience, they can play as long as they want to. It all depends on how you feel about yourself and if you are enjoying the game. Both are great examples to young cricketers all around the world.


PakPassion.net : Are you looking to playing Test cricket for the West Indies again?

Chris Gayle : I would love to get a chance to play that final Test match, if that is the case. I would love to get a proper send-off and a farewell. That is my line of thinking as I do want to get on that path back to Test cricket. The idea is to somehow find a way back but let’s see how it goes. For the rest of this year, however, I will keep on playing franchise cricket and if that time to play Test cricket comes my way, then I will be ready and looking forward to it as well.


PakPassion.net : Is the players’ interest in Twenty20 leagues an aberration or is this the way forward for many in cricket?

Chris Gayle : As much as most of the people would like to look away and not recognize the importance of Twenty20 leagues, the fact is that the reality about the public and players’ interest in this format is totally different. For the players, the interest has been growing for a while now and has been accentuated by the advent of the Indian Premier League (IPL) which has completely re-invented this format of cricket. This has obviously opened the eyes of younger cricketers as it benefits them in many ways. This is of course a career route that many other players would like to take as well. You have to understand that playing other forms of international cricket can take a toll on your body in the long term, so, if you are a skilled all-rounder, you would want to be maximising benefits and utilising yourself in franchise cricket. Twenty20 leagues give the players more options and it’s up to them to decide how they can fit into this format and utilize their skills.


PakPassion.net : How can Cricket West Indies improve their less than cordial relationship with the players?

Chris Gayle : I honestly have no idea how these relations can ever be improved. The situation has been like this for years. My comments on this issue will be similar to what others have been saying for years, so I will simply be voicing over their views. Just talking about this won’t really solve anything; it’s all about concrete actions to see if they can get this thing right. If they are not serious about solving issues with players, then it's best for Cricket West Indies to forget about it and let the players get on with their careers without expecting any good outcome. As for the players, they need to suck it up and just do the best in the field as talking about the situation and bad relations will not get them anywhere.


PakPassion.net : You have played in a few such leagues around the world so what makes for a good Twenty20 league in your view?

Chris Gayle : In my opinion, any such league has to feature content which the general public loves to see. By this, I mean it has to contain some big names in such tournaments which will attract television rights which are crucial for the sponsorship and financial side of things. It follows that; with big names in a Twenty20 league, the viewership increases and that in turn benefits the players as well. The more popular the league becomes, the better the chances for it to expand as well. This is a win-win situation for both the Leagues and the franchises as well.

If you look at the Pakistan Super League, this is only the second edition and in my view the PSL can only get bigger and better. But they have to continue to put in some more hard work; they will need to put in some good public-relations work and build upon their success from the inaugural edition. If they can build-up the viewership, then they can continue on this road but people also need to be patient as it will take some time before all benefits come to light. If you look at the Indian Premier League, it wasn’t big from the first day but they built it up and it has kept getting bigger and bigger since then. The same applies to the Caribbean Premier League and the Big-Bash; each of these leagues has taken time to build and there is a process to be followed to make that happen.


PakPassion.net : Disappointing start for Karachi in the PSL but you must be hoping for a turnaround in fortunes?

Chris Gayle : It’s a disappointing start for sure from a team point of view and from a personal point of view as well. But then, that’s the nature of cricket and especially true for Twenty20 cricket. You can be the best team in the tournament but see yourselves fall behind. It takes time to get going and we are hoping to build some momentum by winning the next game and getting over that initial hurdle. Then, one hopes that the momentum will take us through into the back-end of the tournament as well. We now have games coming up in Sharjah where we are looking to get back into the winning rhythm with the game against Lahore Qalandars on Thursday.


PakPassion.net : What’s the atmosphere like within the Karachi Kings squad?

Chris Gayle : The team spirit is wonderful within the Karachi squad. The guys are really enjoying each other’s company and whilst we may have had a poor start but the morale is still high. We have some great guys in the team and a few senior players as well. We have a cool captain and a fantastic coach in Mickey Arthur and are looking forward to the rest of the games. I am sure once we get that first win, it will fill us with more confidence and you will see us play even better cricket out there.
Discuss!