"If FICA gives us the green signal then I will go to Lahore for the PSL final" : Grant Elliott

One of the top performers for Quetta Gladiators in the inaugural edition of the Pakistan Super League, thirty-seven-year-old Grant Elliott has moved on to join Lahore Qalandars in 2017. With over two-thousand runs amassed during his one-hundred and four international appearances, Elliott is proving to be a serial match-winner and a major success for his new team at the PSL.

In an exclusive interview with PakPassion.net, Elliott explained the reason behind his unique 'bat-drop' celebrations in Sharjah, described the experience of playing alongside Umar Akmal and Yasir Shah and praised the leadership of the Qalandars' captain Brendon McCullum. 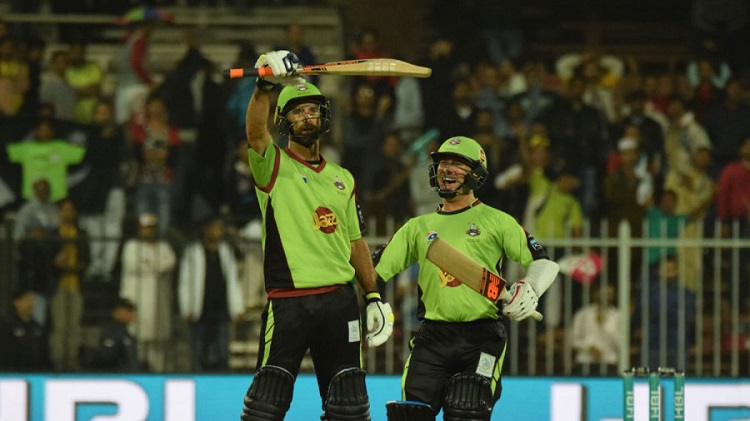 By Amir Husain (23rd February, 2017)
PakPassion.net : Tell us about the now legendary 'bat-drop' celebration in Sharjah.

Grant Elliott : Sometimes when a rap star or a music artist finishes their concert, they just drop the microphone as if to say that the show is over. It’s a sort of a final gesture to bring the show to an end. I was not copying any rapper or musician but the bat-drop was just my way to express myself on the field. Lahore Qalandars as a team is a lot of fun to be with and we always try to enjoy ourselves, so this was just another way to have fun out there.


PakPassion.net : You seemed to be in a hurry to finish off the game against Islamabad United?

Grant Elliott : Well, I have been in such situations before in the final over of tight games. You practice for such occasions and you really have to back yourself. At the end of the day, you live and die by the decisions you make. So, in this situation, my view was that if I could hit a four or a six, the game would be over straightaway. If I had taken a single, then who knows how close the game would have gone. Yes, that one hit was a risk but then you have to back yourself and go for that one hit to win the game. It’s great when you back your skills and it pays off on one day, but it may not give the same result on another day.


PakPassion.net : How has the move been from Quetta Gladiators to Lahore Qalandars?

Grant Elliott : I had a great 2016 season with Quetta Gladiators but unfortunately they traded me and I joined the Lahore Qalandars. I have to say that I am really happy with the Qalandars who are a great team to be with. In Brendon McCullum, we have a captain who is leading us to play an exciting brand of cricket. Then we have Paddy Upton who creates an excellent environment and it is all topped by a fantastic group in our management including the owners. In Aaqib Javed we have the energy and driving force behind this team, and hopefully we are all set to play more exciting cricket in the coming days.


PakPassion.net : What is your experience of playing alongside Umar Akmal?

Grant Elliott : Umar is a fantastic player and we saw his talent on display in the game against Islamabad where he scored 66. It was amazing watching him hit boundaries from the other side of the pitch and I thoroughly enjoyed that performance. He is exciting, aggressive and is a good team man as well. He is the kind of a guy who can win you matches and those are the kind of guys you want around you and in your team. The crowd loves watching him and to me, Umar Akmal encompasses exactly what Twenty20 cricket is all about.


PakPassion.net : How would you rate Yasir Shah who is having a decent tournament?

Grant Elliott : What I really love about Yasir is the energy he brings to the team and to the training sessions. That is exactly what we want to work on as a team as we all like to enjoy our cricket. The skills he has as a bowler are another matter altogether but the enthusiasm and energy that he displays makes him so special and the top performer that he is.


PakPassion.net : Who amongst the younger players in the Lahore Qalandars squad has impressed you the most?

Grant Elliott : Without doubt I am very impressed by the young fast bowler Mohammad Irfan who has a different sort of an action but is very effective. This is his first PSL and he has shown to all of us that he is willing to learn and he seems to have improved tremendously through the games. It’s very nice to have players who have that desire to learn.

Also, we have some young players in the squad like Usman Qadir and Saif Badar who are learning very fast. Without an environment which is conducive to learning and one that is comfortable, it can be very difficult for younger players to be themselves. But that’s exactly what we want them to be around us and so we make ourselves easy to approach which helps in learning. They have a lot of questions about cricket and we are happy to answer them. I think this is one of the priorities of all overseas players who come to these competitions that they should help the local players to develop their game.


PakPassion.net : Turning to your own career, are you looking to make a return to the New Zealand team on the back of a good performance in the PSL?

Grant Elliott : I don’t think I will be playing any more international games. I enjoy playing in Twenty20 leagues around the world and it’s been a lot of fun. In terms of succession planning and so forth, I don’t see any point in me returning to the international side as someone like me can stop a younger player from coming in to the New Zealand team. However, if they are desperate and New Zealand need me then I will most certainly represent my country again.


PakPassion.net : How is the experience of playing under a captain like Brendon McCullum?

Grant Elliott : Without a doubt and as I have said before, he plays and encourages his team to play an exciting brand of cricket. But above all that, his biggest asset is the environment that he can create with the squad members, making them feel comfortable outside of cricket. He also creates the right kind of team spirit along with the coach. There is no ego involved in his dealings with the team and he just encourages the guys to be themselves and express themselves by playing some exciting cricket.


PakPassion.net : How confident are the team of playing the final in front of their fans in Lahore?

Grant Elliott : Of course, you go in to every competition to win but we are taking every game by itself at the moment. We have some tough games coming up and we are focussed on those games to make sure we can go all the way to the final.


PakPassion.net : Should your team be successful in reaching the final, would you be making that trip to Pakistan?

Grant Elliott : If the FICA give us the green signal and we have their approval then yes, I will be going to Lahore for the final.
Discuss!