"PSL final in Lahore would be the best feeling" : Wahab Riaz

Regarded as one of Pakistan's quickest bowlers, Wahab Riaz is currently playing a key role in Peshawar Zalmi's campaign at the Pakistan Super League. Armed with a formidable international record of over two-hundred international wickets, Wahab will be looking to help propel Zalmi forward in the final stages of Pakistan's premier Twenty20 tournament.

In an exclusive interview with PakPassion.net, the thirty-one-year-old Pakistan bowler spoke about his determination to fulfil his late father's dreams of seeing him succeed as a cricketer, the improvements in the 2017 edition of the PSL, answered the criticism directed at Pakistan's bowlers for their disappointing performances in Australia and also discussed the importance of playing the final of the PSL in his home city of Lahore. 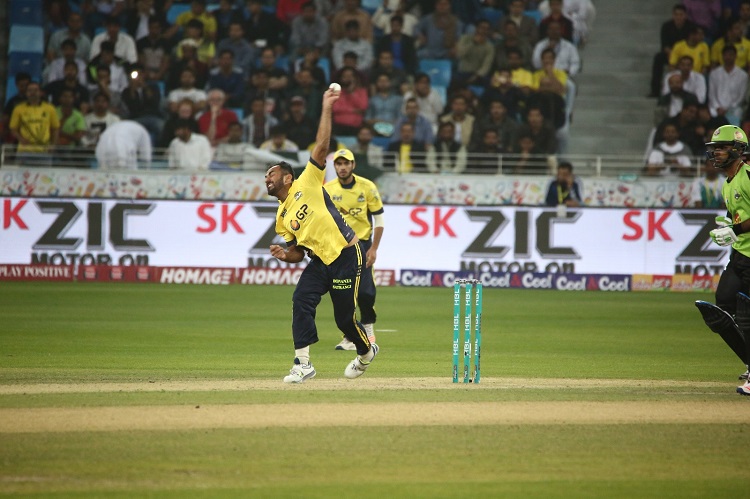 PakPassion.net : The recent passing away of your father must have been tough?

Wahab Riaz : First of all, I would like for everyone to pray that the Almighty grant my father an abiding place in paradise. My father always prayed for me and encouraged me to do better in life and it was his dream to see me succeed in my profession. He did not place any burden on me or allow any hurdles in my progress in cricket and even during his illness he made sure that my career progress was not interrupted by concerns about his health.

He was also my friend and an advisor and I was so upset by my his loss that I did not want to play in the PSL. However, my mother and sisters reminded me that my participation in this tournament was something that my father would have insisted on and it would have given him extreme satisfaction to see me playing. I felt obliged to come to the UAE so that I could fulfil his dreams of playing cricket. It wasn’t an easy task and it is with a heavy heart that I am taking part in this tournament. I am doing my best to battle through and even though he is not with me in this world, I know that his prayers are on my side and God willing I will continue to do my best.


PakPassion.net : How does the second edition of the PSL compare with the first one?

Wahab Riaz : In my view, PSL 2017 is more exciting than the first edition of this tournament. The matches are very close and the teams are well-balanced and the games are very competitive. No one can really say with any confidence which teams will make the last four. Of course, as things stand now, Quetta Gladiators have qualified for the play-offs but the rest of the teams are all neck and neck and the race for the top slots will only get tighter. This is simple proof that the cricket is of a very high quality and the competition is very tough. What is also evident is that matches are going to the wire on many occasions and I do not think we had such games in the first edition of the tournament. I believe that it is this sort of tight finishes which are making this tournament more successful than the previous one.


PakPassion.net : Some tough games ahead for Peshawar Zalmi in the coming days; how do you rate your chances?

Wahab Riaz : Our team is at a pivotal point in the tournament where it is necessary for us to win one game if we are to keep our hopes alive going forward. Of course, the results of the other games will also have a bearing on our progress and things should become clearer in the next few days. To be honest, there is a lot of pressure on us as a team in this tournament. Compared to the previous edition, we have failed to raise our game and that is worrying. We lost matches due to some mistakes which could have been avoided so let’s see how things go from now on.


PakPassion.net : Hasan Ali’s continued progress must have impressed you?

Wahab Riaz : Hasan is progressing really well and I am really impressed by his talent and hard work. On top of that, he has a great desire to learn and his attitude on the field is good and very positive. He is in good form, has great trust in his own abilities and is an excellent find for the Pakistan side. I pray and hope that he continues to improve and keeps on performing for Pakistan as that will greatly benefit our national side.


PakPassion.net : You played some good shots against Shane Watson the other day; Did you enjoy that experience?

Wahab Riaz : It was great and felt even better as I had been struggling with my batting form in recent times. I suppose, I was able to play some good shots in that over and as a batsman you always feel good when you get some runs under your belt. People like to make any encounters between Watson and myself as something more than that but we have played a lot against each other. It is, of course, an interesting battle that is fun to be part of.


PakPassion.net : How will you feel about the possible final of the Pakistan Super League in Lahore which is your home city?

Wahab Riaz : That would be the best feeling that one could ever have as the PSL is a Pakistani tournament. When and if it does happen in Pakistan, I expect to see a jam-packed stadium with people attending from all over the country to support their teams in the final. Seeing the passion for the game that exists in every part of the country, we as players also want such type of cricket to come to Pakistan as well. The PSL is a great initiative and the final, in my view, should happen in Pakistan as the results of such a move will be very positive for the country.


PakPassion.net : Do you feel that the possible presence of foreign players, if the PSL final is held in Pakistan, will also be a big leap forward?

Wahab Riaz : The message that will go out to the world when foreign players play on Pakistani soil will be a positive one. We all know that in every part of the world, there are security related issues. In our case, it seems that the media seems to exaggerate these problems a lot more than what they are, thereby creating a wrong perception. We as Pakistani players know that we have never been threatened or have encountered any safety issues, even when travelling at night and so on. This is something which is a little difficult to convey to the outside world but that perception will change when foreigners come to Pakistan and experience the realities on the ground themselves.


PakPassion.net : Your thoughts on the retirement of Shahid Afridi?

Wahab Riaz : Shahid Afridi is someone who has devoted twenty years of his life to playing and performing for Pakistan. He was not just one of Pakistan’s top players but he was also a match-winning performer. Such a player will always be missed. He was one of the best all-rounders Pakistan has ever produced and the way he used to hit the ball was simply incredible and we are still struggling to find another player who can play such shots. It wasn’t only his batting which was crucial for us but he was equally destructive with his bowling as well. His services to Pakistan cricket will be remembered for a long time to come. I wish and pray for the best for Shahid Afridi in his endeavours after his retirement. I know that he wants to devote time to his foundation to help people and he has our best wishes for success in that venture.


PakPassion.net : There was some criticism directed at Pakistan's bowlers for their disappointing performance during the Australia tour, especially for no-balls. What is the problem there?

Wahab Riaz : Let us be honest and say that most teams that have gone to Australia have struggled a lot there. To compete and defeat Australia in their backyard is not an easy task as it demands a lot from the visiting teams. Obviously, wins and losses are part and parcel of the game and things did not go our way but one thing no one can doubt is the effort that we put in to this series. We were guilty of handing control of the game back to Australia in some games but we also gained a lot of experience from this series. The lessons we learnt from this series will need to be exhibited in the future series we play against others.

As for the no-balls, I have been struggling a bit but also have worked very hard with Azhar Mahmood and you would have noticed a reduction in this problem in recent times. My aim is to eliminate this issue in the future.


PakPassion.net : Mickey Arthur looked very angry at his team during the PSL match against Quetta; what did you make of that?

Wahab Riaz : Look any coach will be frustrated by his team’s work if they do not perform well and do not put in the effort that they should be doing at this level. Mickey always lets the players know if they are not performing to their potential so that they realize the importance of their role in the team and how their performance is effecting the overall team’s result. No one should take it badly as having a coach like Mickey who can talk to you in such a frank manner is a huge advantage. This can only be good for the player so that he knows his shortcomings and no one should take criticism in a bad way as it is done with the best intentions.
Discuss!