"It is my wish to make a comeback in the One-Day format" : Yasir Shah

Currently regarded as one of the world's top bowlers, Yasir Shah has had a meteoric rise to fame since his Test debut for Pakistan in October 2014 against Australia. With 149 Test wickets in just 26 games, Yasir Shah is clearly Pakistan's weapon of choice in the longer version of the game and also continues to work towards his aim of contributing in the ODI and T20I formats of the game as well.

In a recent interview, Yasir Shah recounted his memories of Pakistan's historic Test series win in the West Indies, how he will miss the presence of Misbah-ul-Haq and Younis Khan on the cricket field in the future, what he wishes to achieve in his stint with Kent and his aspirations to reach the 200 Test wickets target in the near future. 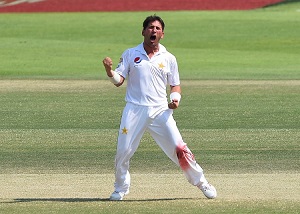 By Saj Sadiq (17th July, 2017)
PakPassion.net: Tell us about that incredible last day of the final Test against West Indies. Did you think that Pakistan could win the Test or did you feel that you had blown it and the match was destined to be a draw?

Yasir Shah: First of all, I would like to thank the Almighty for allowing us to win that important game. It was always our intention to be the first Pakistan side to win a Test series in the West Indies and to do that, we knew we had to win the final Test. To win this series and the final Test was an important objective for us, especially as this was the last series for both Misbah-ul-Haq and Younis Khan. We were all aware that time was ticking by but I was trying very hard and hoping that the next ball would be a wicket-taking ball. I am so glad and thankful that my wish came true and we were able to win the match. You never give up hope and I continued to believe despite it getting very tense at the end.


PakPassion.net: How strange a feeling will it be when you walk onto the field in the next Test match and Misbah-ul-Haq will not be there to offer advice and guide you?

Yasir Shah: It will definitely be a strange feeling and I will really miss Misbah-ul-Haq when I walk onto the field to play the next Test match. Although Misbah-ul-Haq will not be standing at mid-off or in the covers when I come into bowl, I am happy to say that I already have a good understanding with Sarfraz Ahmed. Thankfully with the experience of playing 26 Tests for Pakistan, I have a good understanding of my own field settings and we will all do our best for the country although we will all undoubtedly miss Misbah-ul-Haq.

PakPassion.net: You must have a special bond with Misbah-ul-Haq due to the role he has played in your career in domestic cricket and with the Pakistan team?

Yasir Shah: Yes absolutely, Misbah has played an important role in shaping my career. He has been like an elder brother for me and his guidance wasn’t only limited to the time we were all playing cricket but he even took care of all the players like a sibling in matters off the field as well. There were many occasions when we were late coming back to the team hotel and he would sit us down and explain to us in a mature and calm manner about what was expected from us as cricketers. This is the type of guidance I got from him and this is important as younger players can make mistakes, but he handled all of us really well and in such a clam manner.


PakPassion.net: Other players come and go but how badly will Pakistan miss Misbah-ul-Haq and Younis Khan?

Yasir Shah: There is no person who can be an exact replacement for both of these great players. One can only hope that some of our up and coming domestic players will rise up and try and fill the gaps left by Younis and Misbah. Whilst there may well be replacement batsmen who can put in good performances in the future, what we will not find is the type of guidance that we took for granted when Misbah and Younis were playing with us. The manner in which they would approach you and the maturity in their advice which would motivate you to perform even better is something that was brilliant. Yes, some other well-performing players may well come onto the scene but there can really be no substitute for the advice Misbah and Younis would give to us at crucial times on the field.


PakPassion.net: What are you looking to gain and achieve from your stint at Kent this summer?

Yasir Shah: There is a lot to learn from playing in county cricket and this is the primary reason I am here this summer. In this form of cricket, you have to become independent in the sense that there isn’t too much advice available and you have to take decisions about how you will bowl and have to set the field for your own bowling. Furthermore, as an overseas player, the eyes of the world are upon you to bowl well so that puts added pressure on you and it would be great if I can perform under such conditions. With Pakistan playing two Tests in England next year, I will also be using this opportunity to get more practice in English conditions ahead of the mini-series.


PakPassion.net: I guess given that your bowling will be heavily scrutinised, you won't be revealing all your tricks to the county batsmen?

Yasir Shah: As a good professional, I am here to serve the county I am playing for and I will put in my best efforts to help them win games. I have been brought here for a specific purpose and I will do my utmost to put in the performances which will give the best benefit to my team.


PakPassion.net: What were your emotions like when Pakistan won the Champions Trophy?

Yasir Shah: As a fellow Pakistani and also someone who has played alongside some of the players, I felt extremely proud of our performance during the Champions Trophy. I had the pleasure to witness live one of the key games which was against Sri Lanka at Cardiff. That game became very tense at one point but we were able to overcome that challenge and proceed to the next stage. I, like many others, wanted our team to be victorious in England and win the Champions Trophy and thanks to the Almighty, we were able to achieve that. What really pleased me was to watch Sarfraz Ahmed captain our team with such confidence in a major tournament and lead his side to victory. He was able to unite the team under his leadership with each member doing their job to the fullest. The bowlers bowled with determination and stuck to the plans provided to them and the batsmen knew their roles and performed really well. I would also like to mention the excellent manner in which the newer players contributed to the cause. This is something which is great news for Pakistan cricket and I feel will bring further success to the country in the future.


PakPassion.net: You must really be impressed with how Shadab Khan has performed recently?

Yasir Shah: It’s a matter of great pride for me that there is another leg-spinner in our team who is performing so well. Shadab is an excellent leg-spinner and possesses a lot of variety in his bowling. He has a good googly and can also bowl an excellent flipper and slider too. I know that, because we have both worked and practised together as well. I feel that he will continue to improve further as he plays more matches for Pakistan. What I would recommend he does is to play 4-day games when he goes back to Pakistan so that he can add that experience to his armoury as well. This experience will really help him in playing Test cricket as in the longer form of cricket, you really need a lot of patience to succeed. When Shadab puts in long spells, that will give him a good idea of how to bowl in Tests whenever he plays in that format for Pakistan in the future.


PakPassion.net: You must also be hopeful of selection in the One-Day format in future?

Yasir Shah: My objective is to perform well in whichever format I am asked to play in. The idea is to put in my best effort for Pakistan. To achieve that, I will aim to bowl the best I can in every league or domestic tournament so that the selectors can take note and pick me for the national team. It is my wish to make a comeback in the One-Day format and I am trying hard to achieve that aim.


PakPassion.net: Your batting seems to have improved a lot as we have seen recently in international cricket and also for Kent?

Yasir Shah: Batting is something I am paying a lot of attention to, and am working hard to improve my skills in this very important part of my game. I am fortunate that the coaches here at Kent have also been working with me on my batting. The advantage of playing county cricket is that you have a lot of time to refine your skills and add to that, you have good coaches and facilities including bowling machines as well. If the weather is not good, then you can still practice indoors on your batting. So, this is a great opportunity for me to work on my batting and I am making full use of this chance.


PakPassion.net: Like Saeed Ajmal in the past, are you also considering working on a mystery delivery to enhance your repertoire?

Yasir Shah: At the moment, my emphasis is on making sure that my action is correct but I am also working on improving my googly. In the coming days, hopefully, people will see the results of my hard work as I am practising hard to improve this aspect of my bowling. It's an area of my bowling that I feel I need to improve and I feel that my googly is improving and will continue to get better.


PakPassion.net: What future aims in terms of records or targets have you set for yourself?

Yasir Shah: I always have aims for the future in my mind and I also plan how I will achieve those goals. At the moment, on top of my list, is the next Test series which we will play against Sri Lanka in the UAE. But then, I have a goal and a set of aims for each series I play. Of course, the next milestone for me personally is to get to the 200 Test wickets mark and you will see me working hard to achieve that in the future, God Willing.
Discuss!