"I will continue to convey the message to all cricketers to stay on the right path" : Mohammad Amir

In an interview with PakPassion.net's Saj Sadiq (for Sky Sports Cricket), Pakistan seamer Mohammad Amir explains how he has matured as a player and person since the spot-fixing scandal, how he has no plans to quit Test cricket, his desire to become a fully-fledged all-rounder, his spell in the Champions Trophy final against India and the future of Pakistan cricket. 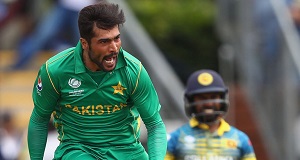 By Saj Sadiq (25th July, 2017)
Recently there were some rumours that you were contemplating retiring from Test cricket. Can you clarify this?
MOHAMMAD AMIR: I have no idea what the thinking was behind this ridiculous story. I'm fit, strong and healthy and have no intentions of quitting any format. What I had said was that as a cricketer you have to take care of your body and look after your fitness levels and someone altered that statement and quoted me as saying that I wanted to quit playing Test cricket. It's totally untrue and as long as I am fit I want to play in all formats.
You've been playing almost continuously since your return to cricket. How is the body holding up? It must be tempting to take a rest every now and then?
A: No I am fine, I feel okay. There is no doubt that when I returned from my ban I did struggle a bit regarding my fitness which was to be expected, but day by day I'm feeling stronger and am now in better shape.
You lost five years of your cricket career, it must feel like you have to make up for lost time?
A: I was banned when I feel I was at my peak and anyone in my shoes would feel the same way I did and would also have gone through the whole range of emotions that I did. However, now that I am back, I can only look forward and not think too much about the past. As a fast bowler if you are out of the game for five months then that can be catastrophic, but to be out of the game for five years was very tough and to make a comeback after such a lengthy period with no cricket behind me was a difficult ask. But who knows, maybe being out of the game for five years was somehow a good thing and a blessing for me, in that I could have been seriously injured if I was playing continuously at such a young age.
How do you feel now about the events of 2010? Was it a bad memory or a lesson learnt for you and for upcoming cricketers?
A: That was a very tough time in my life and I learnt a lot of harsh lessons that I will never forget. I will always maintain that any young cricketer can learn a lot from what happened to me. But dedication, honesty and hard-work will always prevail. I had the passion to come back and that is what got me through those dark days. I will continue to convey the message to all young cricketers, in fact to all cricketers, to stay on the right path, stay honest, be dedicated and do not look for short cuts to success.
Pakistani cricket fans are very demanding and a ruthless bunch. How do you cope with the pressure of such high expectations?
A: Yes it's true that Pakistani fans are very demanding, in fact I would say that fans of all Asian teams are very demanding regarding their respective team. They expect their team to win every game and never lose, but as a professional I have to manage these expectations and to not let these expectations to affect my performance. Of course, I am going to be honest and say yes pressure does affect me sometimes, as it does everyone.