"All players will have to play PSL games in Pakistan if they are held there" : Najam Sethi

In an exclusive interview with PakPassion.net, Sethi spoke on a variety of issues including the Sharjeel Khan verdict and its repercussions on Pakistan cricket, status of the upcoming farewell ceremony for retired cricketers, explained how PCB had dealt with issues relating to Pakistan players' participation in overseas domestic tournaments and clarified the process behind election of the PCB Chairman. 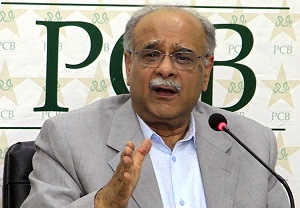 PakPassion.net: What message does the Sharjeel Khan verdict in the spot-fixing case send to the world?

Najam Sethi: I think the message is very clear. When we say we have solid evidence against someone who is accused of corruption, we mean it. We will and did not let go once we had that belief. We are continuing to work with all stakeholders to uproot any corruption or even a scent of corruption to ensure that our cricket is not tainted by any such matter.


PakPassion.net: Looking back to the events of February 2017, would you say that you were shocked when the allegations of spot-fixing came to light?

Najam Sethi: During the first edition of the PSL, the thought that something like this could ever happen didn’t cross my mind at all and there wasn’t even an inkling that this was a possibility. Of course, my security team were on top of things but it didn’t occur to us that this could happen and thank God, nothing like this did transpire in PSL 2016.

When the second edition of the PSL came along, we did have some prior indication that such corruption could happen and so we were technically and mentally prepared for such an eventuality. However, to be totally honest, I did not expect that such an issue would come to light in only the first match of the tournament. Literally within 48 hours of the start of 2017 PSL, we were faced with this situation which was shocking. But when it did happen, the evidence that I saw was sufficient to convince me that what we suspected was true. As we can see, the charges against Sharjeel Khan have all been proven and the punishments meted out. We will review the judgement in detail and if we think that they are lenient, we will seek stiffer sentences. In our view, the minimum sentence is five years which is also what is prescribed by the ICC. In this case, the sentence is two and a half years ban and the rest is suspended but we will review this and decide if we would like to challenge this decision and get the suspension removed.

PakPassion.net: Does Pakistan cricket need to rebuild its reputation once again, as the world may feel that players have not learnt lessons from the 2010 spot-fixing scandal?

Najam Sethi: I believe the world has seen how serious we are in dealing with this issue and to be frank, this is all water under the bridge now and everyone has moved on. If you look back to 2010, there were some big and established stars involved and there involvement, therefore, was considered a serious issue. Now the emphasis has changed and the loss of big stars is not an issue because we have none. We are in the middle of a phase where we are creating a new team and there are no big stars. We are bringing in fresh blood and if we don’t set the right standards for these youngsters, then it will spell trouble for us in the future. So in the meantime, we will continue with our policy of zero tolerance and continue to investigate and punish any transgressors with full force which will demonstrate our resolve.


PakPassion.net: What is the status of the farewell ceremony for Misbah-ul-Haq, Younis Khan and Shahid Afidi?

Najam Sethi: Firstly, there will be no farewell match held for any of these players. There cannot be farewell matches for players who retire and this is the case around the world. Yes, you can have a benefit match but you cannot have an international game after you have retired. We will hold a farewell event for Shahid Afridi, Misbah-ul-Haq and Younis Khan on 14th September. A lot of people will be in attendance and apart from formal words and commemorative shields, we will also thank the three players for the great services rendered to the nation. It is also our hope that people like Afridi will work closely with the PCB to improve the quality of cricket in this country. We will certainly be offering them such positions with the PCB for their consideration.


PakPassion.net: Have all three players agreed to attend this farewell ceremony?

Najam Sethi: I spoke to Shahid in London recently and he said that he would attend this ceremony. In addition, Misbah-ul-Haq has also agreed to attend and Younis Khan, whilst saying that he would love to be present on that day, asked for some time to consider the offer as he may have some pre-arranged commitments on that day.


PakPassion.net: What’s the update on the legal proceedings against the BCCI about the failure to honour the MOU?

Najam Sethi: There has been excellent progress on this matter. We held three meetings in the past few months with the BCCI to address the issue but all three meetings were inconclusive with the BCCI sticking to the position that the government of India did not allow the bilateral series to proceed. The matter is now with the ICC’s disputes resolution committee. Now the situation is that I will be travelling to London to record my statement on this case with our lawyers and we will proceed from there.


PakPassion.net: Will the overseas players participating in the PSL have to play matches in Pakistan or will it be optional for them?


PakPassion.net: What are the plans for more teams after Multan in future editions of the PSL?

Najam Sethi: There is no plan to include another new team for 2019 and it will only be possible to consider an addition to the list from 2020 onwards.


PakPassion.net: Has there been progress on the finalization of the Sri Lanka and West Indies tours of Pakistan in terms of schedules?

Najam Sethi: The Sri Lanka schedule has already been laid down for the bilateral series to be played in the UAE. So, all that will happen is that the three Twenty20 games will shift to Pakistan but the dates will remain the same. So that isn’t too complicated and has already been decided. The West Indies have made a firm commitment to play in Pakistan and there is no doubt about that. We will provide the final dates for this series at the appropriate time.


PakPassion.net: Pakistan seems to have turned a new leaf with their victory in the Champions Trophy victory. Do you think they can win the 2019 World Cup?

Najam Sethi: Mickey Arthur’s goal, as he has explained to me, is that he is building a team for the future that can participate in tournaments and win them as well. What that means is that we have to set the standards now that are needed to achieve this goal. There may be ups and downs along the way but that is our ultimate goal. So that is our target and we shall be working hard to put up a good performance in the 2019 World Cup.


PakPassion.net: Is there a danger that Pakistan players’ participation in future editions of the Natwest T20 Blast or the CPL will be jeopardized by PCB’s last-minute changing of domestic tournament schedules?

Najam Sethi: Let me state that the players are well aware of what is expected of them. Their contracts with the PCB clearly state that if a domestic tournament is organized then they have to come back and play in it. All the NOCs issued to players are subject to this condition and that is also the world practice. No domestic tournament should suffer because players have been allowed to play leagues around the world. We all know this so it should not be a surprise to anyone. We are following the same practice. What has happened here is that the CPL NOCs were given with the domestic tournament in mind. When the date for that tournament was shifted due to security and various other reasons, Mickey Arthur came up with an idea to work on fitness tests for the players before the World XI visit. The players came over for about 4 days and some of the players went back to finish-up with their overseas commitments. So, there is no issue there. We had a good discussion with the CPL and all others and everyone is happy with the outcome. So, in summary, the players are satisfied as is the CPL and the West Indies board as well.


PakPassion.net: Are any changes expected to the manner in which PCB appoints the Chairman or decides on policy matters?

Najam Sethi: I believe that there is a big misunderstanding about this whole issue. If you read the constitution of the PCB, you will note that the PCB Chairman is not nominated by the Prime Minister of Pakistan. The constitution of this organization was approved by the Supreme Court of Pakistan and it calls for the PCB Chairman to be selected from a group of 10 persons who constitute the Board of Governors (BoG). Four of these elected members are from the regions, four from the departments and two are nominated by the Patron-in-Chief of the PCB. Any one of these 10 persons can be elected as the Chairman of the PCB provided he has the requisite number of votes. This is enshrined in the constitution and the Prime Minister has no influence on this process. The constitution was written by two judges of the Supreme Court of Pakistan and I see nothing wrong with it. Furthermore, the constitution has been approved by the same authority as well.

What people need to understand is that the Patron-in-Chief has to have a minimal role in such an organisation so as to stop any malpractices. The ICC have accepted this constitution and it’s the best constitution we have had in a long time. Before this, one man could come and control everything. Now we have 10 members in the BoG which has such strong personalities like the CEOs of Habib Bank Limited, United Bank Limited, SSGC, WAPDA; none of them are pushovers and along with other regional heads, they are tasked in formulating the policy for the organisation. The Chairman of the PCB is simply tasked with execution of this policy.
Discuss!