"Going to Lahore will feel like I am going home" : Grant Elliott

Rated currently as one of the top Twenty20 specialists in the world, the 38-year-old Grant Elliott has been a popular figure at the Pakistan Super League and most recently lead Birmingham Bears to the final of the Natwest T20 Blast tournament. With over 2000 runs to his name in his favoured Twenty20 format, Grant Elliot also has the distinction of representing New Zealand in 83 ODIs and 5 Tests.

In an exclusive interview with PakPassion.net, Grant Elliot looked forward to his participation in the upcoming World XI tour of Pakistan, clarified the reasons behind his decision to take part in this historic tour, explained why it's important for international cricket to return to Pakistan and spoke about his willingness to play in Pakistan in future editions of the PSL as well as his aspirations to work as a coach for the PSL side, Lahore Qalandars. 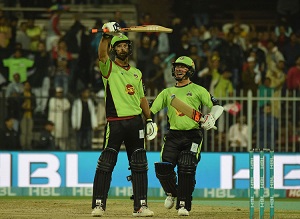 PakPassion.net: How did the opportunity to play for the World XI come about?

Grant Elliott: Andy Flower gave me a call about availability and I told him I was available as I am currently only contracted currently to Birmingham Bears so the opportunity was there for me. I've not signed any long term deals with any team so that gives me the chance to move around freely and play cricket around the world.


PakPassion.net: Was it a difficult decision to make to commit to the tour of Pakistan?

Grant Elliott: You've got the relevant people and relevant bodies there such as FICA and the ICC and you base your decision on their directive. Also having played in the Pakistan Super League I have people such as the owners of the Lahore Qalandars to offer me advice. Obviously you do your homework and it's not the sort of decision that you take lightly, but I don't think anyone would be going to Pakistan if they did not think it was safe and no amount of money would get people there if they did not think it was safe. I hope that we are potentially taking a small step to bringing international cricket back to Pakistan at some stage.


PakPassion.net: Was it a decision where you had to really convince your family to support you and how did they feel about it?

PakPassion.net: What are your thoughts on going to Lahore, excited, nervous?

Grant Elliott: I think it's quite exciting. I'm looking forward to playing in front of a country that has sadly been starved of international cricket. They had the PSL final there and the atmosphere looked like it was amazing. The likes of Darren Sammy are going back there to Pakistan after he played in the PSL final. It's exciting to be playing cricket in Pakistan and also making a difference and playing a small part in bringing cricket back to Pakistan.


PakPassion.net: I guess as an adopted Lahori the World XI series in Lahore becomes extra special for you?

Grant Elliott: I've never been to Lahore so I'm really looking forward to that. I suppose, going to Lahore will feel like I am going home.


PakPassion.net: Some say that the World XI players are only in it for the money. What is your response to this accusation?

Grant Elliott: Of course we are getting paid and there is no denying that but FICA, ICC and the National Bodies have endorsed everything and that shows you how confident they are that things are safe in Pakistan and cricket can go forward in Pakistan as it was proved when the final of the PSL was held in Lahore.


PakPassion.net: Would you be prepared to play in Pakistan in future, for example during the next edition of PSL?

Grant Elliott: I would once again go through the security measures and go with the advice from the professionals. We get all of that information and then we can make our own assessment on whether we feel it is safe to go to Pakistan.


PakPassion.net: How do you want the Pakistan versus World XI matches to be remembered and what should be the aim of hosting these matches in Lahore?

Grant Elliott: Hopefully the Pakistan Cricket Board can fulfil the same levels of security as there was at the PSL final and which has been promised to the World XI. This will then hopefully mean that these matches in Lahore will be a step or perhaps the turning point for international cricket to return to Pakistan.


PakPassion.net: What are your thoughts on the fact that the Pakistan team has not been able to play international cricket at home since 2009?

Grant Elliott: It's really sad for the Pakistan team having to play all of their home games away from Pakistan and in UAE. I know all of the local players all over the world want to be playing in front of their home crowds. It's amazing and a testament to the players that Pakistan reached the number 1 Test ranking despite not having played any home Tests since 2009. There is nothing better than playing in front of your home crowd and it would be great for the Pakistani fans to very soon experience cricket in their own country. This would also be a great opportunity for the youth to see their heroes playing cricket in their home country. I think it's so important for the young cricket followers of Pakistan to see their heroes, mentors and the players they look up to and aspire to at close quarters. It is also equally important for the players of both Pakistan and the World XI to carry themselves in such a way that makes a difference to those kids lives in Pakistan who are finally getting a chance to see international cricket at home.


PakPassion.net: Do you believe that the tour by World XI can make a big impact on the future of Pakistan cricket?

Grant Elliott: Absolutely. As cricketers we hit a leather ball around a field but I have seen in my career what a difference cricket can make to people's lives and how it can bring a nation together and how it can bring people together. Sport does have a huge amount of power and has the ability to change people's lives. I remember how interested I was in the game as a youngster and the players who had an impact on my life.


PakPassion.net: Can we expect a bat drop from you during the Pakistan versus World XI series?

Grant Elliott: Watch this space, you never know, but I think it will be tough to compete with Darren Sammy's celebrations.


PakPassion.net: I believe that you may be working as a coach for the Lahore Qalandars in future?

Grant Elliott: I'd like that to happen and there are ongoing discussions happening. The first step is to become an assistant coach for Durban Qalandars in South Africa. I feel like I have 4 years of playing left in me but eventually your playing career comes to an end and you have to prepare for that. I believe in the Lahore Qalandars brand and I think it's fantastic how they go about their work and what they believe in and the brand they want to build. I approached the Qalandars and told them that I was very keen to get involved in coaching and that I want to be involved with people that have the right character and have integrity. I have told them that I want to be involved with Qalandars in any way possible and I believe that I have a lot to offer. I do not just want to work for anyone and I believe that if the Lahore Qalandars continue to build up their brand it will be very special. I'd like to help them in any way I can in terms of their player development pathway, the Jazz Rising Stars talent hunt, which is something that I think is fantastic. We had four guys at the PSL who had come from nowhere and who had come through the talent hunts and what a great experience it must have been for them to be in the Lahore Qalandars squad alongside players like Brendon McCullum.


PakPassion.net: Do you think the Lahore Qalandars have failed to reach there potential in the PSL so far?

Grant Elliott: Well if we had beaten Karachi in the last game in the second edition of the PSL, when Pollard went 6 and 4 at the end then we would have made the last 4. We built something special last tournament and we are an exciting brand that I want to be a part of and I am sure we can move forward in future tournaments.


PakPassion.net: How important is it for the older heads to nurture young talent in tournaments such as the Pakistan Super League?

Grant Elliott: It's crucial and from my perspective I enjoy working with young talent and developing younger players within a squad. I also enjoy helping them as well as imparting knowledge I have or facilitating discussions and ensuring that the younger guys aren't too shy about approaching any of the players such as Brendon McCullum for advice. It's amazing how much the guys can learn from an environment such as the PSL and it can make such a difference to their careers..


PakPassion.net: And perhaps the next PSL may be an opportunity to impart some of your knowledge to Umar Akmal?

Grant Elliott: I've not really followed what's been going on but I know there were some issues. One thing we talk about at the Qalandars is being a good person in the team or the squad and it's something I'm a big believer in. Just be a good bloke. You want to have the respect of your team mates but you also want to have their backing and to be able to celebrate each other's successes and victories. As a cricketer you fail more times than you succeed so you need your mates to be there backing you. You can try as hard as you want but you need to make a team that is as close to family as possible and that is utopia and that's where you want to be.
Discuss!