"I am confident I'll earn my place back in the Pakistan team" : Hammad Azam

UBL captain, Rawalpindi's Hammad Azam, made his debut for Pakistan during the tour of West Indies in 2011. Given limited chances at the international level he is yet to make a significant impact in international cricket and hopes to put things right once given another go.

In an exclusive interview with PakPassion.net, Hammad expressed his delight on captaining the UBL side, spoke about the ongoing Quaid-e-Azam Trophy, the competition for places in the national team, about his ambitions of making a Pakistan comeback and much more. 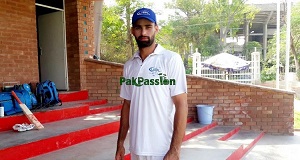 PakPassion.net: You are captaining UBL in the Quaid-e-Azam Trophy this season that must be an honour?

Hammad Azam: It is a matter of immense honour and a privilege for me to be leading a team like United Bank Limited. One must take pride in captaining any team, but it is a special occasion for a player to lead a team with names such as I have playing under me in our team. It is a learning curve for me, but I've enjoyed this new experience so far and I hope I'll get to learn more from the senior players in the team. All the players are very cooperative and very supportive. I have got to learn a lot from players like Umar Akmal and Sohaib Maqsood. Moreover, we feel honoured and blessed to share the dressing room with someone like Younis Khan, who is a legend of the game himself. Younis has not played a match so far, but has remained with us as part of the coaching staff. His batting tips always come in handy.


PakPassion.net: How do you feel the season is going so far for UBL?

Hammad Azam: We have had a fantastic start to the Quaid-e-Azam trophy so far. Our performances, as a team have been very satisfying. There used to be a notion and a belief that regional teams are considerably weak as compared to the departments, but this year teams have been evenly matched and we're getting to see competitive cricket all around. Regions such as Karachi and Lahore have got some very talented players in their ranks and we have enjoyed playing against them.

PakPassion.net: What have the pitches been like so far in the Quaid-e-Azam Trophy?

Hammad Azam: This season, the pitches have been pretty lively as well. The pitch in our first game was very supporting to the batsmen as well as to the bowlers. Runs were scored and wickets fell, giving everyone a chance to chip in with what they are good at. In our second match in Lahore, we played on a track which was a tad slower. As professional cricketers, we have to understand the nature of the pitches and also keep in mind we will have to play in different conditions and sometimes not as favourable as our players would desire them to be.


PakPassion.net: You scored a century in your first match as captain. That must set you up nicely for rest of the season?

Hammad Azam: Absolutely! We wanted to start off well as a team and we could not have asked for a better start to the season. It was needed and thankfully, the players delivered for the team. As far as I am concerned, I am happy with the way I performed in the opening match. As a skipper, I had a lot of responsibility and the onus is always on the captain to do well and to lead from the front. Inshallah, I will try to make sure I keep performing and end this season in the same way I have started it. As every other player, I also have my goals and aims. I have discussed my plans with the coach and as a unit, we will try to implement those plans. I bat in the lower-middle order and I'll be satisfied with myself should I manage to score anywhere near 650 runs by the time this season ends.


PakPassion.net: You've been given limited chances to perform for Pakistan in international cricket. Does that hurt?

Hammad Azam: No, that does not, actually. I always keep myself motivated to perform well and to earn a recall into the national side. Whenever the team is announced and I do not find my name in it, I lift myself up and it serves as an inspiration for me to do better in future. Easier said than done, but one must stay focused and always keep one's chin up. I am working hard and I am confident I'll earn my place back in the Pakistan team very soon.


PakPassion.net: Do you feel you can compete with the likes of Aamer Yamin and Faheem Ashraf?

Hammad Azam: Both Aamer Yamin and Faheem Ashraf are bowling all-rounders and I am a batting all-rounder. Many people are of the view that I am a bowling all-rounder, which is not exactly the case. I know the competition for places is tough, and to make a comeback for Pakistan, I will have to compete against these players. However, I am determined to work hard, score runs and to change a few wrong perceptions about me as a player.


PakPassion.net: Do you believe pace-bowling all-rounders are a rarity in Pakistan these days?

Hammad Azam: Yes, that is true. I put this down to the conditions we have in our country. Not that there are not many all-rounders in the domestic circuit, and tough competition for places exists too. We have Aamer Yamin, Faheem Ashraf, Bilawal Bhatti and Anwar Ali. All of them are decent bowling options, and all of them need persistent chances to show signs of improvement in their performances. Modern cricket demands pace bowling all-rounders. This is not cricket of yesteryear. Cricket has gone through several revolutions in the recent past, and one cannot deny the value of all-rounders in this day and age. Just like every team, Pakistan also needs all-rounders in their side.


PakPassion.net: Do you feel you are still good enough to play for Pakistan?

Hammad Azam: Yes, absolutely. I do feel my best years are still ahead of me. As I said before, I always keep myself motivated to do well in domestic cricket. The world lives upon hope and I am confident of a comeback in the national team. I believe this Quaid-e-Azam trophy season is very important for me. This is the premier tournament we have in our country, and performances in this tournament go a long, long way. I am always determined to work hard.


PakPassion.net: How much do you rate UBL's chances of winning the Quaid-e-Azam trophy this season?

Hammad Azam: I believe we have a very balanced squad and we have got a perfect start to the season as well. We finished third last year, and second a year prior to it. This time we will try to make sure we go one step further and manage to win the competition. I would like to mention Saad Ali and Umar Siddiq. Both of them scored centuries for us in our second match against Lahore Whites. They are the ones to look out for. As with every other side, our goal is to end the season as champions too. Inshallah, all the players in the team will work hard to achieve this goal. We are wary of the fact that there are some very strong teams in the competition this season. HBL, SNGPL, SSGC etc. are all well equipped and very dangerous outfits on their day. Team combination matters a lot when you take the field, and the right combination wins you matches. The team which performs better on the day obviously has a better chance of winning the match and in the end, the competition as well.
Discuss!