"I let myself down with some below par performances" : Sohaib Maqsood

In an exclusive interview with PakPassion.net, Sohaib spoke about his ambitions of making an international comeback, on the comparisons with Inzamam-ul-Haq, his performances in the ongoing domestic season and more. 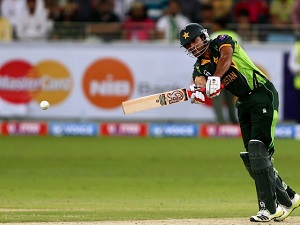 PakPassion.net: You were seen as the next Inzamam-ul-Haq, but what's happened?

Sohaib Maqsood: Whenever you are compared to a cricketer of the stature of Inzamam, there is added pressure and motivation at the same time. We should not jump to conclusions so quickly and must not compare a player to someone such as Inzamam-ul-Haq, unless that player has played a significant amount of cricket or has performed to such an extent that comparisons appear sane. Inzamam-ul-Haq is a legendary figure, not only in Pakistan cricket, but in world cricket as well. Initially, I used to get excited by all the comparisons, but at the same time I knew I was nowhere near the calibre of Inzamam. Such comparisons only seem logical should you produce consistent performances for two or three years which clearly is not the case with me.


PakPassion.net: Where do you feel things have gone wrong for you?

Sohaib Maqsood: I'd put that down to bad performances. When I was playing consistently, I had so many chances to convert starts into big innings. I let myself down with some below par performances. Other than that, the wrist injury I sustained, was a major setback in my career. A bone was removed from my hand, and two years on, I still have not entirely recovered from the operation I underwent. I have had a decent amount of injuries in my career, but that specific wrist injury threatened my career more than any other injury in the past.

As a professional cricketer, you have to be mentally strong in order to lift yourself up in such situations, where you are down and tackling an injury. As I said, I have had a few injuries even before I had started playing international cricket, but then because of my mental strength, I was able to return stronger as a player and was able to put up notable performances in the domestic circuit. Unfortunately, in this case, I could not recover from this wrist injury as quickly as I was expecting to and that factor hampered my comeback to the international side.

PakPassion.net: Do you believe that there is a way back for you to the national team?

Sohaib Maqsood: Yes, I do believe I have the resolve and the mental strength to make a comeback into international cricket. For the first time in 3-4 years, I have a chance to play a full domestic season. It is a long, long season and I will try my best to make it count by scoring runs consistently. I have had a very tough last few years but I feel that I have now left them behind. I want to perform in the same way as I used to perform in 2012, 2013 and 2014, which were my prime years in domestic cricket. I'll now try to take the field with the same mindset as I used to when I was scoring runs on a consistent basis. I know that it’s easier said than done, but I really want to enjoy my cricket and play my natural game out there.


PakPassion.net: What do you think you need to improve on before you can make that international comeback? Which areas are you working on?

Sohaib Maqsood: The most important aspect which I feel I need to work on and improve on is my fitness. This new culture has been introduced in Pakistan where you find district level cricketers training hard when they are not playing on the field. There is no off-season so one has to even train during match days if one has to improve on his fitness. We are playing cricket the entire year as there are four to five months of domestic cricket, and then there is franchise cricket as well. If you are part of the national team, you are playing international cricket and if not, you are part of some league outside the country. There is a lot of cricket these days, so one must keep oneself fit during the year to cope with the stress and workload. Moreover, I feel that fielding and fitness go hand in hand. You have to keep yourself fit in order to produce your best fielding effort on the ground. When you have played cricket at this level, you obviously know how to grab the ball, how to dive properly and so on. The only real difference is how fit a player is which effects selection for international games. The standard of fitness has to be top notch and only then you can also become a top fielder. You have to be energetic and agile on the field, and must have strength in your legs to run for a longer period of time.


PakPassion.net: Some critics have blamed your shot selection for your below par performances, do you agree with them?

Sohaib Maqsood: Yes, to some extent it was justified, but not entirely. I used to bat at number 5 and 6 when I was playing international cricket for Pakistan. When you are batting lower down the order, and have to look for big shots to increase the run rate, you are bound to lose your wicket. Most of my dismissals were caught in the deep, because I used to be looking for scoring shots. I admit I played rash shots in my international career, but that was not always the case. I always played according to the situation of the game. I always try to play in a manner which is best suited for the team at that point, and winning the game for my team has always been my motive. In doing so, I gave my wicket away on a number of occasions which is unfortunate.


PakPassion.net: What is your best batting position and how important has it been for your progress?

Sohaib Maqsood: Ideally, I have always liked to bat up the order. I am a top-order batsman and I have played all my cricket in the domestic circuit, batting at 3. Having said that, I also do not mind batting at number 4 either. However, during my stint as an international Twenty20 player, I was played in the lower order which didn’t work for me. I do that hope during the third edition of the Pakistan Super League, I get to play in the top-order for Multan Sultans. I am very confident that if I am used as an opener or at 3 in the batting order, I will avail the opportunity and be able to express myself in a better way.


PakPassion.net: Do you agree that this is a crucial domestic season for you?

Sohaib Maqsood: Yes, I am looking forward to scoring runs in domestic cricket this season. I am very motivated and if you look at my statistics in all formats in domestic cricket, I have a very fine 4-day record, which is also better than my record in the other formats of the game. I want to improve on those records this season. There is no particular goal which I have set this season in terms of number of runs or centuries. I will just aim to enjoy my cricket, work hard and stay focused when I am batting. This domestic season is not only important for me to make a comeback into the national team, but will also help me develop my self-belief which is crucial to have as a player. I need to be confident as a player and remind myself of the good performances I put up in domestic cricket to earn a place in the national team. I would like to cash in and convert my starts into big innings this season. I believe big knocks such as a double hundred in 4-day cricket is very important for my confidence, which I am lacking a little.

When I first played for Pakistan, I used to be a very consistent performer in domestic cricket. I was just 25 or 26 years old back then and those were my prime years. I should have focused a little more and should have converted those starts into big innings. I would also like to improve on my fitness and stay mentally strong. There is still a strong desire in me to make a comeback in international cricket.


PakPassion.net: Pakistan's Champions Trophy triumph means that competition for places is very tough in the ODI team. Does that bother you?

Sohaib Maqsood: The competition for places when I started playing international cricket was a lot stiffer than it is now. These days it is all about fitness levels. No matter how many runs you are scoring or how consistent a performer you may be, you need to be very fit to make your place in the international side. I still remember I scored 2400-odd runs and was not even named in the top 50 players’ to be considered for selection in the national team.

I feel that it is a lot easier to get selected now. Should someone score these amount of runs now, he would easily be picked provided he is fit. At that time, Misbah-ul-Haq, Younis Khan, Shoaib Malik and Umar Akmal were playing and used to be consistent performers for Pakistan. Nowadays, instead of worrying about competition all you have to do is to stay fit, score runs on a consistent basis and you will definitely get picked if the team requires your services.


PakPassion.net: How do you rate UBL’s chances of winning the Quaid-e-Azam trophy this season?

Sohaib Maqsood: I believe UBL has been the most consistent team in domestic cricket in the last two years. A couple of years back, we qualified for the final, but lost that match unfortunately. The next year we finished third in the table. Since we have a lot of players playing for Pakistan, they were not available for most of the time during the season, which did not help our cause as far as the team combination was concerned. This season, we have a very balanced team. Our team has become stronger with the inclusion of players like Sohail Khan and Mohammad Nawaz. Mohammad Saad is also a very talented youngster and has been performing well this season. We would like to go one step ahead and win the 4-day competition this year.
Discuss!