"We aren't looking to just make up the numbers" : William Porterfield

Rated as one of Ireland's finest batsmen, William Porterfield has lead Ireland since his appointment as captain in 2008. His credentials as Ireland's leading run-scorer in ODIs and T20Is are backed by an impressive tally of 4188 runs in 162 matches and include a memorable victory against arch-rivals England in the 2011 World Cup.

In an interview, William Porterfield spoke about the positive implications of Ireland's elevation to the level of a Test playing nation, looked forward to playing Tests against Pakistan and the prospect of facing the likes of Mohammad Amir and Yasir Shah, the return of international cricket to Pakistan and explained what it would mean for his side and the Irish fans to face England in a Test match in Ireland. 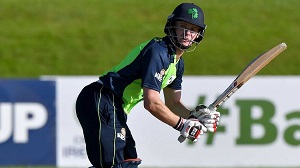 PakPassion.net: You must be delighted and excited about Ireland being granted Test status?

William Porterfield: It's great news and it's something we have been working towards for quite a while, so to have it all confirmed and for everyone to know exactly what is happening is great news for the country and everyone involved in Irish cricket.


PakPassion.net: Ireland is a nation of sports-lovers, do you therefore believe that cricket can compete with the other sports that are so popular in Ireland?

William Porterfield: Yes I think it can and it will. There's a great onus on us players to put in the performances and to keep trying to entertain. The Board and the Chief Executive Warren Deutrom are being very ambitious in their plans about where they want Cricket Ireland to go. They want to make cricket in Ireland a mainstream sport and that's a big statement because you've got a lot of other sports to compete with such as football, Gaelic football and Rugby. So it's very difficult to potentially compete with those sports, but that's where we want to go and what we want to do. If anyone had said we would be where we are now, a lot of people would have had a bit of a chuckle. I think nothing is beyond where we can go and where cricket can go in Ireland.


PakPassion.net: Do you think Ireland is ready for Test cricket?

William Porterfield: I think it's important to realise it's not just about being granted Test status. Rather it's about being given Full Member status and receiving the benefits of the extra funding that it will bring, which in turn, will allow us to improve the infrastructure of Irish cricket. This extra funding will go a long way to help us improve as a team and help us become competitive in the Test arena. It will also help make us competitive across all formats which is the most important thing.

PakPassion.net: Which do you see as the key areas that the additional funding should be invested in?

William Porterfield: The biggest thing for ourselves is to improve our facilities and to have the chance to train and play full-time. A lot of people playing in our first-class structure are working as well and what happens is that we potentially lose out on players featuring for Ireland because they have to forge a career elsewhere. So investing in this infrastructure and getting people on contracts and also more of the cricketers on contracts so they can train and play full-time is very important. These players will not improve if they aren't playing cricket full-time. A combination of improving the facilities and getting players on full-time contracts will hopefully go a long way to making us a lot better.


PakPassion.net: Do you envisage more cricketers in Ireland taking up the game on a full-time basis in future?

William Porterfield: I'd like to think that will be one of the things that comes out of Ireland being granted Test status, but we want people to be good enough as well. We have to go down the route of a first-class structure and be fully professional but that is not going to happen overnight. Hopefully there is room for that to happen as early as next year, even if it's only on 6 month contracts for the players initially during the summer, which will be massive as that will see players playing and training full-time.


PakPassion.net: How important is it for the additional funds to be utilised at the grass roots level of cricket in Ireland?

William Porterfield: Yes all this has to filter through to the grass roots level of Irish cricket. At the moment our club cricket isn't necessarily producing international cricketers. We've got to give players the pathway to the provincial system and then onto first-class cricket which will allow them to get picked up for the national side. Hopefully our first-class system will prepare our cricketers for international cricket. But at the moment as we are not full-time professionals and there are no contracts, we are in danger of losing cricketers that are essentially good enough now or will be in the next couple of years. We have to be in a position where instead of having a core of 15-20 players selected for Ireland, we need to increase that to 30 plus who are really challenging to make an Irish squad of 15 or the starting eleven. I think this all needs to filter though the system and we can then start having a system where our cricket is naturally competitive.


PakPassion.net: Do you agree that Test status should mean that Ireland do not lose their best players such as Eoin Morgan to England?

William Porterfield: I think those days are gone now. A few years ago we didn't have the option of playing Test cricket or even actually making a career of and earning a living as a cricketer in Ireland, so hopefully that has changed now. I don't think the players will have that decision to make in that sense as long as things are done right and I think there will be a pathway to forge a career in Irish cricket both domestically and internationally for the players.


PakPassion.net: By and large new teams come into Test cricket and really struggle. Do you see a tough few years initially for Ireland in the 5-day format?

William Porterfield: If you look at any side that has come into Test cricket, Bangladesh being the latest and even going back to New Zealand and Sri Lanka, it's not an easy place to come in and stamp your mark straight away. We know that, but a lot of our guys have a lot of experience playing county cricket and that's where a lot of our current group of cricketers come from. Hopefully once we improve the first-class structure that will help, but we aren't going to make no bones about it, it will be difficult. For example look at our first Test match fixture against Pakistan and look at how many Test matches they have already played. They know what it's all about and they've had that experience and we will be relying on what we've gained in domestic cricket to stand us in good stead.


PakPassion.net: You mention Pakistan as your first Test opponents. The thought of facing up to the likes of Mohammad Amir and Yasir Shah must be an exciting proposition?

William Porterfield: Yes, that's what we want, to face the best players in the world. Obviously when he's on song Mohammad Amir is one of the best bowlers in the world. It will be a great test for us and this is why we want to play Test cricket because it challenges your mental strength and technique. It will be a great experience for ourselves to be involved in, but we aren't looking to just make up the numbers, we will want to be competitive and looking to find a way to win that first Test.


PakPassion.net: The historic Test match will take place in May in conditions that will be unfamiliar to Pakistan. That will surely be an advantage for you and your team mates?

William Porterfield: We never know what we are going to get regarding the weather in Ireland. It will be nice to play Test cricket with the sun out, but let's see. Whatever the weather, we will want to take full advantage of playing in our home conditions and make full use of the familiarity we will have in those conditions and try to make it as uncomfortable for Pakistan as we possibly can.


PakPassion.net: You'll be hoping that Pakistan is the first of many high-profile teams touring Ireland in the coming years?

William Porterfield: Very much so and hopefully across all formats as well. Let's get things up and running and get ourselves in the Future Tours Program and we will have guaranteed fixtures for the public in Ireland which will be huge. There will be a lot of interest in the Test format in Ireland but these tours will incorporate cricket across all formats and as we all know the Twenty20 format is very popular as is One-Day cricket. Hopefully all this cricket and tours will have a positive knock-on effect for cricket in Ireland with fans supporting different formats. As long as the number of fans is increasing, that will put us in a better place.


PakPassion.net: Playing a Test match against England in Ireland will be the ultimate dream for many of the Irish players won't it?

William Porterfield: Yes that will be massive. It'll be a great sporting occasion. Ireland against England in any sport is huge and it will be no different in Test cricket. That'll be one the fans will pencil into their diaries and get down to see that fixture for sure. Let's hope that day is not too far away when England play a Test match in Ireland.
Discuss!