Considered as one of the brightest young batting talents in Pakistan, Saud Shakeel recently starred in the Quaid-e-Azam Trophy for PTV. He is placed fourth on the tournament run-scorers' list at the conclusion of the group stage with 488 runs in 7 games including one hundred and four fifties. The 22-year-old has already scored five first-class hundreds and averages an impressive 43 in first-class cricket.

In an exclusive interview with PakPassion.net, Saud spoke about his experience of playing for PTV in the 2017/18 Quaid-e-Azam Trophy, how participation in A tours had aided his development and his dreams of representing Pakistan at the highest level. 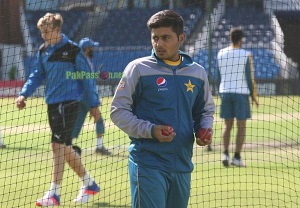 By Amir Husain (10th November, 2017)
PakPassion.net: How has the experience been of playing for PTV during this season's Quaid-e-Azam Trophy?

Saud Shakeel: It was an excellent few weeks with PTV during this season. As you know, I am currently the fourth highest scorer in the Quaid-e-Azam Trophy so I feel that I have accomplished a lot and of course, I could have done more but I am satisfied with my performance. PTV lost their first-class status in 2014, but we regained it in 2017 after excellent performances at Grade 2 level, and returned to the Quaid-e-Azam Trophy for the 2017–18 tournament. We had new management under Dr. Nauman Niaz which guided us really well throughout, however the overall performance of the team was below par which is disappointing as we did not make it to the Super 8 round. I am sure if given another opportunity, we will improve in the future and give a better account of ourselves.


PakPassion.net: Was the weight of expectations something you were able to cope within the PTV team?

Saud Shakeel: I felt very happy that the team was relying on my previous first-class experience as I had been playing at this level of cricket since 2015. Whilst that did add an extra layer of responsibility on my shoulders, I tried my best to put in my hundred percent effort to help my team and thankfully, the Almighty helped me in achieving my aims. From my side, I wanted to make sure that I could justify the trust put in my abilities and I feel that I have gone some way in doing that.


PakPassion.net: Did you feel that this season has been crucial in helping you further develop your batting abilities?

Saud Shakeel: As a cricketer and especially as a batsman, you learn from every innings you play so improvement is a constant process. This season, I was lucky to have the former Pakistan cricketer Mohammad Wasim as our Head Coach and throughout this season he has guided me and helped me improve so much. I felt much more comfortable playing with the guidance I was getting and am sure I have more to learn from him in the future.

PakPassion.net: There has been criticism of pitches during this season of the Quaid-e-Azam Trophy, do you agree with that?

Saud Shakeel: As far as the pitches were concerned, they were a mixed-bag. Of course, we had a tough time in our last game which was against KRL in Rawalpindi where we were bowled out for a paltry 37. The pitch there was tough to play on as our score indicates but the Dukes ball being used this season also compounded the problem on a pitch which was providing assistance to the bowlers. But I will say that on the whole we got pitches which were decent to bat on. I understand that there were problems on some pitches as was the case in the games that the teams in the other pool encountered. I believe SNGPL, the team under Misbah-ul-Haq, suffered due to some tough pitches, but we were lucky that our pool games were, by and large, unaffected by the quality of the surfaces.


PakPassion.net: You mentioned the use of Dukes cricket ball for domestic cricket in this season, how different does it behave from the Grays ball which was used previously?

Saud Shakeel: I have always felt that the construction of the Grays ball does not assist the bowlers in terms of seam movement. The Dukes ball in contrast has a more pronounced, almost an upright seam which helps to make life difficult for batsmen as it assists seam bowlers considerably. In my case, I had already seen and experienced the Dukes ball during the Pakistan A tour of England in the summer of 2016 so it wasn’t that much of a surprise for me. In Pakistani conditions too, the Dukes ball is a handful for batsmen to handle especially on helpful pitches. To be honest, there isn’t much of a difference in facing either Grays or Dukes as both types of balls present unique challenges. Ideally speaking, Kookaburra is the ball that most Pakistan batsmen prefer to face in their home conditions as it allows them better chances of scoring.


PakPassion.net: How was the experience of playing alongside the likes of Hasan Raza and Tabish Khan?

Saud Shakeel: Our captain Hasan Raza is a vastly experienced player and he has also represented Pakistan as well. I was very fortunate to have an opportunity to be in the same team and played under his captaincy in this season. It was a most enjoyable experience as he never let anyone feel that they were juniors to him. His support for all of us in the team was amazing and much appreciated by all of us. He was always at hand to help us iron out any issues in our techniques or to advise us on how to plan out our innings in different conditions. With Tabish Khan, there isn’t much more to say apart from the fact that he is a world-class bowler who now has over 500 wickets in first-class cricket which is a huge achievement. It was amazing watching him bowl for us and to be frank, we would have done much better this season if Tabish had better support from the other end.


PakPassion.net: Who were the toughest bowlers you have faced this season?

Saud Shakeel: The quality of all bowlers we faced this season was very good and shows you that playing first-class cricket in Pakistan is a tough assignment. In our match against UBL, we came across some excellent bowling by Mir Hamza who pretty much had us on the ropes. He picked up 12 wickets in that game which settled the game for us. In that game, Mir Hamza was supported by the likes of Sohail Khan and Ehsan Adil who are excellent bowlers in their own right which did not make our lives any easier at all. UBL are lucky to have a complete package like that in terms of their bowling resources and all of these bowlers support each other to the fullest. This bowling partnership makes the trio one of the best bowling attacks in domestic cricket at the moment.


PakPassion.net: You were part of the A teams last year, how was that experience?

Saud Shakeel: As a young and aspiring cricketer, there can be no better experience than being part of an A team to represent your country. The tour of England with the A team in 2016 was an amazing opportunity for me to get an idea of how playing international cricket feels like. Whilst I did not score as many runs as I would have wanted to, it was an eye-opener for me in terms of knowing what was needed in terms of hard-work required to play top-level international cricket in the future.


PakPassion.net: Given the importance of this level of cricket, will you be interested in taking part in more A tours?

Saud Shakeel: Absolutely, if given the chance I will be the first one to put my hand up to participate in A tours. We had a couple of those tours last year but there is no indication that there are more planned for this year. I do feel that other nations conduct A tours more frequently than we do. More A tours are needed to help develop Pakistani cricketers and we should be following the example of other nations as such tours are crucial for the development of up and coming cricketers. This level of cricket is just one step away from international cricket and these are great opportunities to learn for youngsters. If you look at the bowling attack that Sri Lanka fielded in the recent series against Pakistan, some of the players like Lahiru Gamage had played against us in the summer during the tri-series involving England Lions, Pakistan A and Sri Lanka A. This clearly shows that players who take part in A tours can easily play an important role in the senior teams as well. The confidence you gain from playing in A tours not only helps a player move up to the national team but also makes it easy to adapt to the demands of top-level cricket.


PakPassion.net: Which format of the game do you prefer and would like to pursue more in the future?

Saud Shakeel: I have no preference for one format or the other. I feel that each format of the game, whether short or four-day, has its own demands and presents a new challenge. The limited overs format is enjoyable for the audience and the players alike and I like it too. My wish is to play equally well in all formats and I do know that there is a lot of hard-work involved in accomplishing that goal which I am ready to do. I understand that there are some experts who feel that playing limited overs cricket has a negative effect on a player’s ability to play the longer format. I do not agree with that opinion. Limited overs cricket is all about improvisation which is the need for that format and it’s a different mindset when you play that style of cricket. I would say that a limited overs batsman can also find a place in four-day games as the game has moved on and scoring rates have increased as has the level of improvisations. The four-day game is not being played in the slowish manner which we used to see in the old days so the batting style has taken something from the shorter formats for sure.


PakPassion.net: What would it mean for you to play for Pakistan if you got the chance?

Saud Shakeel: Like anyone in my position would agree, it would be a dream come true for me should I get a call to represent my country. But until that day arrives, I am also very much interested in playing in the PSL which is a great way for young players to be noticed and show their skills. I am hopeful that given my current form and previous record, one of the franchises will pick me for the next PSL tournament.
Discuss!