"Cricket can play an important role in normalising relations between India and Pakistan" : Shahid Afridi

One of the most well-recognised faces of modern cricket and known for his swashbuckling style of batting which saw him earn the nickname 'Boom Boom', Shahid Afridi finally retired from international cricket in 2016. In an international career lasting almost 19 years in which he played 523 games for Pakistan, Afridi entertained his millions of fans by scoring 11185 runs and taking 540 wickets whilst taking his side to some memorable victories in a spectacular fashion.

In an interview, Shahid Afridi spoke about Pakistan's current slump in form in Tests, his impressions of Shadab Khan, Pakistan's chances of victory in the 2019 World Cup in light of their Champions Trophy triumph and explained why it is important that India and Pakistan should renew their rivalry on the field of cricket. 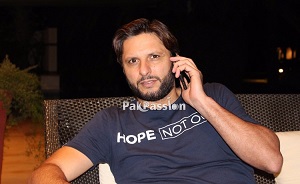 PakPassion.net: How long do you think it will take the Pakistan Test side to recover from their current slump in form?

Shahid Afridi: The retirements of Misbah-ul-Haq and Younis Khan have been a major blow to our Test side as they were the backbones of our Test batting line-up. It will take some time for the side to recover from the loss of two of Pakistan’s top batsmen but what we have to do is to give ample chances to the new players to try and fill this gap. I do feel that we really should not have lost the series against Sri Lanka in the UAE which was more than likely due to a lack of spinners in the team. In the subcontinent, it is the spinners who take most of the wickets so their presence in the Test team is crucial and we did not have that cover in our team in the matches against Sri Lanka. Looking ahead to the future, what I would like is for this Test team to play some of the world's top-sides as in South Africa, England and Australia to properly judge where we really are in terms of Test cricket. Our batsmen struggle away from home on those pitches but looking at the current talent and their skills, I am sure if given consistent chances, these players can form the right combination for the future success of our Test team.


PakPassion.net: Is too much pressure being put on Sarfaraz Ahmed by having him as captain of Pakistan in all formats of the game?


PakPassion.net: How impressed are you with Shadab Khan’s progress so far?

Shahid Afridi: I think the term “so far so good” is the best way to describe how well Shadab has done so far for Pakistan. Like I have said before, one can only judge how good a player or a team is when they perform well against the top teams of the world. If we look at his performance so far, I am really impressed by his energy and the fact that he can also bat fairly well. Now, it’s really up to him to take his own career forward by improving himself further to take his game to another level. In this sport and as indeed in life, one has to perpetually try hard to learn and continue to improve oneself.

PakPassion.net: How do you see Pakistan’s chances in the 2019 World Cup?

Shahid Afridi: I believe it’s a little early to make any firm predictions on how well Pakistan will do in the 2019 World Cup. It will all depend on how this ODI team performs against other teams in the lead-up to the tournament. I would advise the team-management to persist with the current ODI squad we have and not look to change it too much ahead of the World Cup. Of course, they can bring in one or two changes and develop some players along the way but the team members in the present ODI squad should continue to play together up to the World Cup. Personally speaking, I do not see any outstanding talent in the Under-19s which could result in changes to this ODI team. We should continue to give more chances to the same bunch of players we have now and to iron out any issues with their techniques so that we have a good, tried-and-tested combination going into the ICC event. My only other concern is that the 2019 World Cup is in England, so the players will need to be at the top of their game and will also need to adjust to the local conditions which aren’t always easy to deal with.


PakPassion.net: But you must have been encouraged in the manner this ODI team lifted the Champions Trophy earlier this year?

Shahid Afridi: Absolutely no doubt that this team achieved something fantastic when they won the Champions Trophy in England. However, I feel that the tournament was really won on the basis of some superb performances by our bowlers. Our batting wasn’t as effective but then that should be no surprise for anyone as we all know that it’s always been our bowling in the past which has won us games. Having said that, I am encouraged by batsmen like Fakhar Zaman who did very well in that tournament. Before he came on the scene, I was very much in favour of Sharjeel Khan who I thought was the ideal candidate to fill the vacancy for a fast-scoring, hard-hitting batsman at the top of the order. This type of batsman can put the opposition's front-line bowlers under pressure and help the team to put up a good score in the power-plays. But the real issue I see is the lack of a genuine all-rounder of Abdul Razzaq’s calibre who could change the game. If we can find a player like that then it will do wonders for the balance of this ODI team.


PakPassion.net: Did a part of you wish you were still playing cricket and were there at The Oval to lift the Champions Trophy?

Shahid Afridi: If you ask my honest opinion, then the answer is no. But I was so pleased to see the Pakistan ODI team perform during the Champions Trophy. They lost the first game against India quite badly and had to struggle to beat South Africa and Sri Lanka in the group stages. There was very little hope that they would go all the way and win the Trophy but they did it. This was undoubtedly a great effort by this team and all the team members need to be applauded for winning the Champions Trophy. I will add that I am really pleased with the kind of support this team got from all Pakistan supporters as well as the media which has not been that common in the past.


PakPassion.net: Why has Mohammad Amir struggled to be an effective bowler since his return to international cricket?

Shahid Afridi: In my view, the fact that Mohammad Amir made a comeback after an absence of five years was an achievement in itself. As a captain, I supported him in as much as I could but the fact is that the weight of expectations on his shoulder remains very high to this day. Any bowler will feel more confident when he is taking wickets but he has been unlucky as quite a few catches have been dropped off his bowling. Regardless of all these factors, this is the same Amir we had before except that now he is more mature as a person as well as a bowler. His performance in this year’s county season was excellent and I am sure he is improving. We have to remember that he went through a 5-year gap in his career where he did not play any cricket but now that he is playing more, we will see improvements soon.


PakPassion.net: Do you stand by your assertion that Pakistan is suffering from a lack of cricketing talent?

Shahid Afridi: This probably stems from my remarks in an interview. The problem is that a lot of people out there are incapable of analysing issues related to cricket but start commenting on them without fail. What I meant to say was that if you go back in time a few years ago, it was extremely difficult to keep your place in the team due to the pressure of fresh talent wanting to take their places. Nowadays, this pressure has been reduced as we can barely get 2-3 upcoming players who can challenge players in the team for their places. The reason for that is that we simply do not have facilities to train and develop younger players in special academies and under the supervision of specialised coaches. We are no longer in the old days where all such facilities were not needed to develop young players; the demands of the modern-day game have changed dramatically.


PakPassion.net: Are you concerned about the quality of domestic cricket in Pakistan?

Shahid Afridi: To be honest, I am not the best person to comment on this as I haven’t played domestic cricket in recent times. But, when I did play domestic cricket, the situation was not great at all. I was not satisfied with the standards of umpiring or even the balls at that point in time. The real problem is that too many changes are tried out in domestic cricket on a very frequent basis. What I would like is for the PCB to ask for advice from Misbah-ul-Haq and Younis Khan, both of whom have played a considerable amount of domestic cricket and then decide on changing the structure of domestic cricket. Once that is done, then give it at least three years to settle in and if that still doesn’t improve the quality of the game then by all means, change it again. Changing the system for the sake of it or when a new chairman comes in is problematic and should not be done.


PakPassion.net: What can be done to allow resumption of Indo-Pakistan cricket ties?

Shahid Afridi: I feel that cricket can play an important role in normalising relations between India and Pakistan. Sports, whether it is cricket or football or any other has that effect so really there should be no doubt about it. Pakistan has always extended their hand of friendship towards India as far as cricket is concerned and I do wish India would reciprocate in that regard. When Indians and Pakistanis can live in harmony in overseas nations then we as neighbours can also do the same. We need to have strong relations in which we share each other’s happiness and sorrows. This is something we have had done in the past but in patches, but it now needs to be given a permanent shape and cricket is that binding force which can bring both nations together.
Discuss!