"What have I done wrong? Why is there no justice for me?" : Sadaf Hussain

Regarded as one of the most talented medium-fast bowlers in Pakistan cricket, Sadaf Hussain has played 73 first-class matches where he has taken 353 wickets since his debut in 2009. Despite taking five ten-wicket and 24 five-wicket hauls at the first-class level, his excellent performances in domestic cricket have gone unrewarded as he is yet to play a single game for Pakistan.

In an exclusive interview with PakPassion.net, Sadaf spoke about his disappointment at being ignored by the selectors for Pakistan despite consistently good performances at the domestic level, what drives him to continue playing despite so many set-backs, why he is yet to play a single Twenty20 game at the domestic level and what the future holds for him. 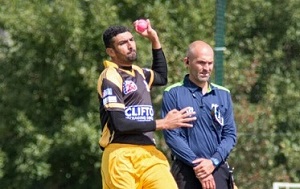 PakPassion.net: You've performed well season after season in domestic cricket, but why do you think you've not had a chance for Pakistan?

Sadaf Hussain: This is the question that keeps going around in my head over and over again. I have no idea why I have never been given a chance to play for Pakistan. The selectors haven't answered this question, in fact nobody has.


PakPassion.net: But surely you must have some idea why the selectors won't give you a chance?

Sadaf Hussain: If I knew the answer to this then I wouldn't be so puzzled. If there was a weakness in my bowling or they felt I wasn't good enough and they told me this, then at least I will know where I need to improve and which areas I need to work on. I've performed in One-Day cricket and 4-Day cricket in Pakistan, yet I am still ignored and face a wall of silence from the selectors.


PakPassion.net: Is there something going on behind the scenes which may explain why, despite your excellent record, the selectors continue to overlook you?

Sadaf Hussain: I've not had any disciplinary problems, I've not had any issues with coaches or teammates and have never been involved in any controversy, so there is nothing in the background that would stop me from being selected as far as I am aware.


PakPassion.net: There were some rumours that a Pakistan Cricket Board official was personally responsible for ensuring that you never got a chance to play for Pakistan. Is this rumour accurate?

PakPassion.net: Wickets and solid performances, season after season, yet barely any recognition. What keeps you going?

Sadaf Hussain: Cricket is my passion, it's my life. I'm the breadwinner for my family and cricket helps me earn a living. My focus is only on playing cricket, improving as a cricketer and being a good ambassador for Pakistan. Cricket has given me recognition, it has helped me put food on the table and I will always be sincere to this sport. Every year I say to myself at the start of the season that my aim is to improve and achieve better statistics and to hopefully get a call-up from the Pakistan selectors. If the selectors pick me, that's great, if not, then I will continue to give my all and serve the domestic teams that select me.


PakPassion.net: You nearly quit cricket a few years ago, why was that?

Sadaf Hussain: That is correct. I was receiving setback after setback. I was ignored for domestic tournament after domestic tournament and sat watching on the sidelines whilst my teammates played in tournaments. I would perform and then get dropped. I was mentally all over the place and enough was enough. I had set my heart on a change of career, but then my family changed my mind and told me to stick at it and better days would come. My family persuaded me to continue playing cricket at a time when I wanted to just give up the game.


PakPassion.net: There was some interest in you from one of the Pakistan Super League franchises. What came of that?

Sadaf Hussain: No, nothing happened. I waited for a call or some communication, but nothing materialised. I guess the problem is that I don't get selected for the other domestic Twenty20 tournaments so it would be difficult for a PSL franchise to pick me. The frustrating thing is that even Rawalpindi don't pick me for Twenty20 tournaments which is puzzling. If Rawalpindi or one of the other teams picked me for tournaments like the National T20 Cup then at least I can show what I am capable of and who knows perhaps that could lead to a PSL contract. If I flop in the domestic Twenty20 tournaments then I won't complain, but when you aren't even given a chance then that is just totally confusing and very frustrating.


PakPassion.net: You have never played a domestic Twenty20 match. That is bizarre. Are you incapable of bowling four overs accurately?

Sadaf Hussain: Well that is unbelievable for me also. My record in One-Day cricket is good and let's be honest Twenty20 cricket is not that different from 50-over cricket and the basics for a bowler are the same. I've been playing first-class cricket for seven or eight seasons yet nobody has deemed me capable of playing even one single 20-over match, which is mystifying.


PakPassion.net: You were invited to a training camp at the National Cricket Academy in Lahore. How did that go?

Sadaf Hussain: It was a 2-day camp and it was mainly to assess the fitness of the participants and the second day was mainly skills work in the nets. The coaches that were overseeing the camp were local coaches who know of me and have seen me play many times already. I guess it would have been better if the likes of Mickey Arthur were there at that camp.


PakPassion.net: Have you ever seen any of the national selectors at any of the matches you are playing in?

Sadaf Hussain: I have seen the selectors at some of the matches but they tend to concentrate more on televised matches which I am never involved in. I suppose it's difficult for the selectors to be everywhere particularly when there are 8 or 9 matches going on and there are only 3 or 4 selectors. Also they tend to attend matches at the main venues rather than the smaller venues when domestic matches are taking place.


PakPassion.net: Some players receive a lot of support from the media, why is it that you are largely ignored by sections of the media?

Sadaf Hussain: I urge the media to support all players and to also support my cause. I urge the media to ask the selectors why I am continually being ignored when the likes of Zia-ul-Haq, Mir Hamza, Ehsan Adil, Mohammad Abbas and Usman Shinwari as well as others have all been given a chance. Why have I not been given a chance? What have I done wrong? Why is there no justice for me?


PakPassion.net: Critics point to the fact that the pitches you play on are bowler-friendly. What is your response to that criticism?

Sadaf Hussain: This season you can say that the combination of the Dukes ball and the pitches have helped the bowlers. If you look at the batting statistics in the Quaid-e-Azam Trophy they show that bowlers have definitely been on top. However I don't prepare the pitches or organise the schedule and I have taken wickets wherever I have played and in every season. Wherever I am asked to bowl, I have managed to consistently take wickets so it's not a case of me having taken wickets only on green tops.


PakPassion.net: Selectors want consistency, yet despite that from you, a call-up for Pakistan or a comeback for Pakistan A still seems a long way off doesn't it?

Sadaf Hussain: What surprises me the most is that apart from one ODI series where I represented Pakistan A versus Afghanistan in 2011 and was the highest wicket-taker with 8 wickets in 3 matches, I have never got another chance to represent Pakistan A. If you look at my record then it points to a bowler who should have got many more chances for Pakistan A. Ideally I thought I could have established myself in the Pakistan A side and then waited for my chance for Pakistan. However that never materialised and my career just stagnated. What generally happens is that your consistent performers in domestic cricket are groomed for international cricket but what happened in my case was that I was dropped from domestic tournaments and ignored by the national selectors. What hurts me the most is that despite taking lots of wickets season after season, nobody has even said to me why they feel I am not worthy of a chance to play for Pakistan A, Pakistan or for any domestic Twenty20 team. Perhaps if I had been given an opportunity in a side match against a touring team I could have shown what I can do, but even that has never happened.


PakPassion.net: What do you feel the future holds for you?

Sadaf Hussain: I can only control what is in my hands and that is playing cricket with passion and giving 100% every time I am selected. I have always given my all for every team and will continue doing that. What happens after that, well anything can happen in Pakistan cricket, but I will always dream for that chance to wear the Pakistan cap.
Discuss!