"We will look to draw inspiration from previous Under 19 World Cup victories" : Hasan Khan

After his first stint as captain of Pakistan Under 19s, where he lead the team to the final of the ACC Under 19 Asia Cup, Hasan Khan has now been tasked to lead the team for the all-important ICC Under 19 World Cup which will be played in New Zealand between 13th January and 3rd February, 2018. 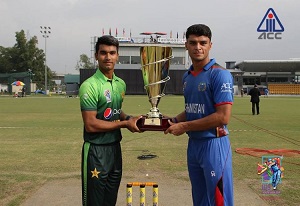 PakPassion.net: How was the experience of leading Pakistan in the ACC Under 19 Asia Cup?

Hasan Khan: This was my first experience as a captain of the Pakistan Under 19 team and I can tell you that it went well, and I really enjoyed the challenge. There was a lot to learn for me as a captain during this tournament. Obviously, I was very happy with what I did right in this role but more importantly, I took note of my mistakes as well which will help me improve as a captain in the future and especially in the upcoming ICC Under 19 World Cup.


PakPassion.net: What would you say were the key learning points for you as captain in the Under Asia Cup?

Hasan Khan: I learnt a lot about captaincy especially when it came to handling the team under different situations. It was very interesting for me to understand how to judge our opponent’s strengths and weaknesses from a strategy point of view and also to think about which bowler to use at what stage of the game. All these are probably easier when one has experience of captaincy, but for me it was a great learning experience. I am also grateful to the team management for guiding me where they could, and for appreciating me when I took the right decisions and also helped me to understood what I did wrong as captain. The message to me from the management was to take my own decisions on the field and even if they turned out to be wrong, I would have learnt a lot from that experience. Once the match was over, my performance as captain was analysed and discussed with the coach and management where they helped me understand how I could learn and improve from this experience. Above all, the mental toughness that one needs to be a captain was something I did pick up from this assignment and hopefully, it will come in handy when I lead the team in the upcoming World Cup.


PakPassion.net: How disappointing was it to not win the ACC Under 19 Asia Cup, especially after qualifying for the final of the tournament?

Hasan Khan: The word disappointment only begins to describe how we all felt but to be totally honest, we have no one but ourselves to blame. Overall, we played some exciting cricket, but we also made mistakes which hurt us. Our shot selection was not good, and we took on unnecessary pressure upon us at crunch times.

PakPassion.net: How has the stint at the PSL at a young age helped you take on challenges when playing for Pakistan Under 19?

Hasan Khan: To play in a tournament like the PSL where players get so much exposure and experience of playing high-pressure games in the presence of top players can only do good for one’s self-belief and confidence. The challenge for me is to implement all the learnings from the PSL in my role as captain for Pakistan Under 19. Hopefully by doing that, I can help my team take on tough opponents and win games as well. I have to thank Quetta Gladiators for their constant encouragement via social media; it's really good to know that I have such good support for me as I embark with my team on a very important assignment.


PakPassion.net: Are you satisfied with the squad announced for the Under 19 World Cup?

Hasan Khan: Needless to say, this is the best group of players we have in Pakistan at the moment. These are all very hard-working players who have shown exceptional skills with bat and ball and I am proud to be leading this group. We have some brilliant fast bowlers as well and this is a well-balanced squad. I feel that with a squad of such abilities, we have a great chance to take on the best teams and also win the World Cup.


PakPassion.net: Are there any opponents in the upcoming Under 19 World Cup who will be tough to face?

Hasan Khan: In a top-quality tournament like the World Cup, it would be foolish to take any opponent less seriously than another. All teams in the tournament are worthy of respect and we will not be letting our guard down against any opponent. There will be no easy matches and the attitude that we will need to play with will simply be to take each game, whether it’s our tournament opener or the final, with the same intensity and execute our plans to the letter.


PakPassion.net: What do you intend to gain from the series against Australia Under 19s and New Zealand Under 19s prior to taking part in the Under 19 World Cup?

Hasan Khan: Given that this will be the first time for most of us to be playing in that part of the world, I would like to thank the PCB for their excellent planning in arranging these two series ahead of the World Cup. These games will play a crucial role in helping us settle a good team combination for the bigger challenges ahead and will also help in gelling the team together. We will also get a very good idea of the local conditions by playing these matches which will prove very useful for our preparations.


PakPassion.net: Will you be drawing inspiration from the previous victorious Under 19 World Cup campaigns by Pakistan teams?

Hasan Khan: Indeed, the achievements of Pakistan’s Under 19 squads in the past are for all of us to see and admire. We have won this tournament twice in 2004 and 2006 and my team and I will look to draw inspiration from these victories. The current squad we have is fully capable of emulating the performances of the past and God Willing, we will give a good account of ourselves in the upcoming World Cup which will make our nation proud.


PakPassion.net: Are there any players you wish to single out as players to watch from Pakistan Under 19s for the upcoming World Cup?

Hasan Khan: I think it would be unfair to pick any individuals in this regard but we all know that Shaheen Shah Afridi, Mohammad Taha, Mohammad Musa all performed well in the ACC Under 19 Asia Cup, so obviously expectations are there for these players to continue putting in the kind of work they did before. In addition, we also have high hopes from the newer players to stand-up and be counted. All players know that this is an amazing chance for them to express themselves and do well and if they can perform well in the World Cup, then so many doors will open for them in the future. I do feel that the squad we have contains enough firepower to take on the best teams in New Zealand conditions and all players, regardless of their experience, are ready to play their role in helping us win the tournament.


PakPassion.net: Are you feeling any pressure on yourself as captain as you go into this tournament?

Hasan Khan: I wouldn’t say that it is pressure. Instead, I would like to look at it as a challenge and quite frankly, I am quite enjoying this as a good test of my leadership abilities. I am not feeling any tension at all as I have some great support from the team management as well as my team and that has really given me a lot of confidence in my own abilities. I will also be looking to bring to the fore, whatever experience I have so far and whether it’s as a fielder, bowler or batsman, my aim will be to lead from the front which is what is expected of me as captain.


PakPassion.net: Are you confident that Pakistan will win the Under 19 World Cup?

Hasan Khan: The expectations from this squad are very high and given our capabilities, we are all very excited and confident about winning this tournament. The squad-members are hard at work in the training camp and are in good spirits. We are all very hopeful that we will return to Pakistan as winners of this tournament.


PakPassion.net: What message do you have for Pakistan fans as you look ahead to participation in the Under 19 World Cup?

Hasan Khan: I would urge the fans to not look at negatives or past results and understand that we need their support. Please continue cheering us on and praying for our success and in return we promise to put in our best efforts to ensure that we correct any past mistakes and not disappoint them in the upcoming tournament.
Discuss!