"I urge Najam Sethi and the PCB to give more support to Pakistan's disabled cricketers" : Farhan Saeed

All-rounder Farhan Saeed has played 8 international matches for the Pakistan Disabled Cricket Team and has become famous for his performances with bat and ball despite his disability.

In an exclusive interview with PakPassion.net, Farhan spoke about the nature of his disability and how he overcame many hurdles to become one of Pakistan's leading disabled cricketers, talks about the memorable moments of his career so far, difficulties faced by disabled cricketers and about his future plans. 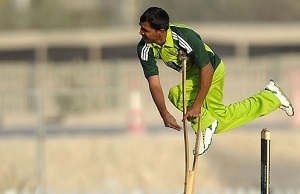 PakPassion.net: Tell us about the nature of your disability and how you developed an interest in cricket.

Farhan Saeed: I was afflicted with polio at the age of 2 and as a result, I became disabled from a very young age. But as I grew up, I used to watch other kids play cricket which was a game I loved. I wanted to play just like them and I had this wish to be like the Pakistan players who commanded so much admiration and respect around the world. I also wanted an opportunity to serve the nation just like our cricket stars have done in the past and that I suppose was what drove me to pursue my love for this game.


PakPassion.net: It must have been difficult to pursue an interest in cricket given your disability.

Farhan Saeed: I would comeback from school every day and join in with kids in my area to play cricket near my home in Korangi, Karachi. Initially, I was told by them that cricket was not a suitable game for a person of my abilities but when I insisted to play, they tried to make special concessions for me. So, they would bowl slow and throw the ball at me from a shorter distance to make my life easier. This happened for a while and to be honest, it was very disheartening to be treated like that. In my mind, I was equal to them all and to tell you the truth, I started to have doubts about my abilities as well. But in the end, my enthusiasm for the game took over. I told them to bowl as fast as they wanted to and not give me any special treatment as I was not afraid of any bowler. They agreed, and I would then play alongside able-bodied cricketers as normal. Later on, when I was eighteen, one bowler from our area, who considered himself very quick told me, ‘Look, if you can play my bowling then we will consider you a proper player’. He bowled to me and I hit his first ball for six and from that point in my mind, I was convinced that I was no less than any other cricket player in the world.


PakPassion.net: Cricket was important, but did you complete your education too?

Farhan Saeed: I had told my father who had a tailoring business that I was interested in educating myself. He was fine with that and I studied until year 8 but due to family circumstances, l had to leave education and then worked in a local factory for a few years. After that, I joined a company and I am still working there. Also, my family keep me busy as I am married with three children as well.

PakPassion.net: How did you join the Pakistan Disabled Cricket Team?

Farhan Saeed: In 2007, I was told of trials for the Pakistan Disabled Cricket Team at the National Stadium, Karachi. I had never played with a hard ball before, so this was a big challenge for me, but I wasn’t afraid. With the Grace of God, I was selected, and I was very fortunate to have people like Mohammad Nizam who was our media manager who looked after all of us like his own children and made sure that all our needs were looked after.


PakPassion.net: What is your stronger suit, bowling or batting?

Farhan Saeed: I was initially selected in the squad for my fast-bowling, but I really like to bat and bowl. I feel that I am equally proficient in both facets of the game.


PakPassion.net: What is the most memorable or interesting incident in your career?

Farhan Saeed: We were invited to play a series of 3 matches in Islamabad against a local team. In one of the games, I had to dive and take a catch which left everyone on both teams speechless. The dive to take the catch was such that the bowler had tears of happiness in his eyes due to my effort. You cannot forget such moments as they bring so much happiness to me when I think about them.


PakPassion.net: The Pakistan Disabled Cricket Team has also played against teams of able-bodied players. Do you recall any interesting episodes from such games?

Farhan Saeed: We went to Malaysia and Singapore on a tour in 2010 to play games against a local club of able-bodied cricketers. Of the 5 games we played, 3 were in Malaysia and 2 were played in Singapore. Whilst we did really well to defeat the team in Malaysia in all 3 games, we weren’t that successful in the Singapore leg of our trip as we lost both games there. But in Singapore we were up against a team which was coached by the former Sri Lanka international Marvan Atapattu who could not believe his eyes as our bowlers were taking wickets against his team. He was very cross with his players, constantly taunting them that they were struggling against a team of disabled players. He told all of us that by looking at the way the team was playing, it did not seem that we were a team of disabled players.


PakPassion.net: The series against England in 2012 was very significant for the Pakistan Disabled Cricket squad, tell us about that significance of the series?

Farhan Saeed: This series against England was very important for us, as this was the first time in history that such a series was played between 2 disabled sides. I am very proud to say that the Pakistan Disabled Cricket Association (PDCA) is the pioneer of this type of cricket for the disabled, with England being the second country to follow the PDCA's lead in this regard. I would also like to add that only four national disabled cricket teams are recognised around the world by their boards and we are one of them. This was the dream our founder and President Mr. Saleem Kareem who was also the first captain of the Pakistan Disabled Cricket Team and its only financial sponsor. He was also accompanied in his efforts by our Media manager, Mohammad Nizam.

Coming to the actual series against England, we played 2 T20s and 3 One-Day (40 Overs) matches at the ICC Global Cricket Academy in Dubai. Our team won the T20 series by a margin of 2-0 and the One-Day series by defeating England's Physical Disability by a margin of 2-1. I had the honour to bowl the first ball of this series and regardless of the result, the friendships we made with the England team members are something I will cherish forever.


PakPassion.net: Can you tell us about your picture which is featuring on advertisements in the UK?

Farhan Saeed: The England Physical Disability team manager had known about me since the tour of Dubai in 2012 and was impressed by me. He recently called our manager Mr. Amir Uddin Ansari and asked him for permission on behalf of NatWest Bank to put my picture as part of a promotion in the UK. We said yes as that was a great honour for me, but this in itself shows how considerate and principled the people are in the UK that they thought it right to ask me before using my picture. Can we imagine that happening in Pakistan? My pictures are constantly used without asking and without recognition of the work I have done.


PakPassion.net: Do you feel that disabled cricketers in Pakistan get enough respect by the people in power?

Farhan Saeed: I will be brutally honest and say that in Pakistan, there is only respect for connections and money. No one really cares about the talent or skills of any player in any type of sport. Whatever the disabled cricketers have achieved is purely based on their own personal efforts and without any help from anyone. In the 2012 Dubai trip where we played England, both Pakistan and England teams who were busy in their own series came to see us in action and the England team were told that I was a very dangerous bowler. I was so impressed by this as I saw a team from a foreign land so impressed by my skills yet in my own home, so few people know about us.


PakPassion.net: Is a lack of sponsors a problem for Pakistan's disabled players?

Farhan Saeed: Let me tell you that the first ever World Championship for physically disabled cricketers is coming up in 2019 and we are glad that the PCB is supporting us in preparations for that tournament. Obviously, what we need are more sponsors to come forward and pledge their support for this team. In addition, we would be glad if we could get more support for the PDCA and disabled players from the PCB and other sponsors throughout the year and not just for special events. This would be similar to what the ECB provides to its disabled players and how sponsors in the UK support their players. I urge Najam Sethi and the PCB to give more support to Pakistan's disabled cricketers.


PakPassion.net: What are the difficulties that are hindering progress of disability cricket in Pakistan?

Farhan Saeed: There is no shortage of enthusiasm amongst disabled players to work hard and succeed for the country and themselves. However, where we lack is in the facilities and equipment which are the basics for any disabled person to progress in sports. To give you an example, during the series against England, one of their players had such a high quality artificial leg that he chased the ball from the keeper’s position to the boundary and stopped it from going for four runs. In a similar situation one of our players tried to give chase, but his artificial leg came off and he fell on his face and was screaming in pain. An improvement in the type of equipment we disabled players have access to will make a huge difference to how we play, and the quality of our lives. Also, what will be useful will be the presence of sponsors who can help players financially whilst they serve the nation by playing cricket.


PakPassion.net: What future plans do you have given that you are now 34 years of age?

Farhan Saeed: I have so far represented my country in 8 international matches, taking 10 wickets and have scored 85 runs. The most important objective for me is to continue to serve my country with honour and dignity. I will play until the day I cannot do any more. Whenever I retire or am asked to leave, I will offer my services as a bowling and fielding coach to continue serving this team and nation which has given me so much love and care.
Discuss!