"T10 has the potential to become a popular format around the globe" : Sohail Tanvir

Regarded as the one of the most sought after Twenty20 specialists in world cricket today, Sohail Tanvir has taken 282 wickets in 272 Twenty20 games. He was recently in action in the inaugural edition of the T10 Cricket League in Sharjah where he topped the charts as the joint best bowler of the tournament with 5 wickets and a fantastic economy rate of 7.8.

In an exclusive interview with PakPassion.net, Sohail Tanvir spoke about the reasons behind his excellent performance in the recently concluded T10 Cricket League tournament, the role of Eoin Morgan's leadership in Kerala Kings' triumph as tournament winners and his views on the future potential of the T10 format. 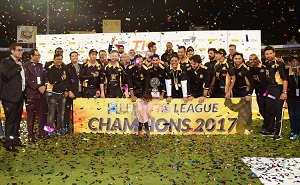 By Amir Husain (23rd December, 2017)
PakPassion.net: How does it feel to be in the winning team of the inaugural T10 Cricket League?

Sohail Tanvir: Its an amazing feeling and naturally when you win a tournament, and especially when it’s the first time for this format, it feels great, and of course, I am also very proud of my team, Kerala Kings, who won this tournament.


PakPassion.net: What adjustments did you have to do to your bowling to have so much success in this tournament?

Sohail Tanvir: To succeed in any form of cricket, you need skills. I don’t really like speaking in this way but as you can see from the results, I hardly had one bad game in this tournament and for that I can only thank the Almighty for making sure that I was able to perform in that way. Also, one needs to remember that you can have skills but the application of those skills in such a fast-paced game is very important. Whilst Wahab Riaz also performed very well, I do feel that I consistently delivered for the team throughout the tournament as I was able to adapt to conditions very well. I also knew that given the short number of overs involved, the batsmen would be coming hard at you and you had to keep your wits about you in this format. So, with a little bit of cleverness, one could say, I was able to control runs otherwise I would have also ended up with many runs scored against me like a few others.


PakPassion.net: Tell us a bit about Eoin Morgan’s leadership during this tournament especially when you consider that he lead Kerala to winning the inaugural T10 League?

Sohail Tanvir: I think as a batsman alone, Eoin was outstanding for the Kerala Kings. His innings of 53 and 63 in the last two games of the tournament played an important role in the team’s success. Yes, the conditions were batting friendly but there is a certain amount of skills involved in scoring runs against some tough bowlers. I had not really played against Morgan before and not seen him bat too many times but what I saw of him in the T10 Cricket League was simply awesome as he continually middled the ball and was in complete control of his shots throughout the tournament. That is amazing, especially if you consider that batsmen hardly have time to settle in during their innings and have to get going from ball one.

As far as his captaincy is concerned, given that he leads his country’s Twenty20 team, it should really have been no surprise to see him do the same with great confidence in this tournament too. Its very clear that he knows how to go about his business as a captain. His utilisation of his bowlers was very impressive and a lot of time he shuffled the order in which bowlers were bowled to adapt to the match situation. He used Wahab and myself, the main strike bowlers, at the best times so as to get the maximum utility out of us. As a tactician, he was simply brilliant. His rotation of bowlers was amazing which is really important. If you think that Twenty20 games are won by bowlers, then that is doubly true in the T10 format. If the team doesn’t bowl well then even a score of 150 is not enough to defend in T10. Off the field, we didn’t have one single meeting to discuss the game and it was a very relaxed atmosphere due to Morgan but on the field, he was totally focused and that also had an effect on the team as well.

PakPassion.net: Were you surprised in the way the tournament turned out to be a success?

Sohail Tanvir: To be honest, this was exactly what I was expecting. It was a great spectacle as far as the audiences were concerned which is really what this type of tournament is all about. We all knew about the nature of the Sharjah pitch so there were no surprises. This being a short format, it was expected that the batsmen would go after the bowlers and the batters would pretty much rule the conditions. I will add that in today’s world, what I would call the ‘real’ cricket lovers who probably prefer the traditional Test format are few and for many the excitement of fast-cricket being played with fours and sixes being hit is what the game is all about. Most people want the games to end quick with maximum entertainment as well.


PakPassion.net: As a professional cricketer, does it bother you that ‘real’ cricket is under threat due to such shorter format leagues?

Sohail Tanvir: All cricketers know that the only true format of the game which is a real test of your abilities is the Test format. But then, I believe like all things in life, cricket also has to move on. Just like One-Day Cricket came about in the days when only Test matches used to be played and then Twenty20 cricket was introduced later, it is innovation which results in the game becoming more popular. The fact of the matter is that the popularity that the game of cricket is gaining in the traditionally non-cricket playing nations such as Norway and USA is due to the shorter format of the game and this is a very important consideration.

No one in these places will want to sit for 5 days and watch a Test match and the game will not take root in those areas if played in that way. Having said that, I am convinced that Test cricket for purists will continue to hold importance and will always be popular in places where it’s been played before. The value of Test cricket will remain constant and not diminish in such countries where Test cricket has always been popular. One only has to look at the amounts of people who are coming to the grounds to watch Ashes in Australia or in Test matches in England to see that interest in Test cricket is still there.


PakPassion.net: What changes are needed in the T10 format for this to thrive in the future?

Sohail Tanvir: To start with, 4 overs are too many for a powerplay in T10 and this goes against the bowlers. If you are reducing a Twenty20 game to T10 then you should also reduce the powerplay overs proportionally and 3 is a good number to have. I believe that was the original plan for T10 but for some reason, it was not implemented. However, I am sure they are thinking about it for the future. But this is a process by which you learn from experience of one tournament and then reconsider some elements for the next tournament and so on until you get the right playing conditions.


PakPassion.net: Whilst we all may want to see fours and sixes, would you agree that T10 is too heavily loaded in favour of batsmen?

Sohail Tanvir: That is absolutely correct and there were a few reasons for that. Firstly, I felt that the boundaries were too short for my liking and as I mentioned before, the powerplay overs were one too many; it really needs to be 3 overs. Yes, situations were stacked against bowlers but then it’s not all about the playing conditions being against bowlers; there is also an element of skill involved which the bowlers can use to their advantage. If you think about it, the last 6 overs of a T10 are in a way the same as a last 6 overs of a Twenty20 game where bowlers can get hit a lot. In that sense, it would appear that T10 is a good test of the skills of a bowler because as we saw in the case of Wahab who had an economy rate of 7.7 or myself where I ended up with an economy rate of 7.8, the bowlers were able to make a difference. This was at a time during the innings when the batting sides had lot of wicket available to themselves and the bowlers were up against batsmen in slog mode.

In fact, the pressure on bowlers was such that even when batting sides had lost quick wickets, due to the small number of overs and so many wickets in hand, they could still get to decent totals. So, it was a great challenge for bowlers and I am happy to say that despite hurdles, those with good skills did bowl well and got good rewards as well. There was also a suggestion by Azhar Ali that number of players could be reduced for this game and whilst he may have a good reason to suggest that, in my view reducing number of players in the teams would have resulted in many other rules to be reviewed as well which would have taken the shine off this tournament. For example, would you also reduce boundary sizes, to accommodate less players? By simply reducing overs, T10 was played with same rules as a regular Twenty20, apart from number of powerplay overs and that way it was kept less complicated.


PakPassion.net: Given the success of this inaugural T10 tournament, do you feel that there is potential for this format to take roots around the globe?

Sohail Tanvir: I have no doubt that T10 format has the potential to become a popular format of cricket which will be played around the globe. We can see that cricket is constantly developing with different leagues happening around the world. Also, we must realise that cricket has become a business and for any good business to thrive, it needs to be attractive to its customers. T10 will do very well, especially in places where people have less time to watch cricket games. In fact, I believe that there is a strong chance that T10 could take over the popularity of Twenty20 cricket in many parts of the world. Also, we must take into account the reason why the ICC has given this format their full backing and support. I feel that this is because, T10 is the best format which is suitable for a place in Olympics due to the time it takes to complete a game. If that does happen, this will expose the game to a worldwide audience which can only be good for cricket.
Discuss!