"I would like to play my whole career with Mickey Arthur as my coach" : Fakhar Zaman

An integral part of the victorious Pakistan ODI squad that lifted the Champions Trophy in 2017, 28-year-old Fakhar Zaman wrote his name in history books with a magnificent 114 in the final of the tournament against India. Since then, he has enjoyed significant success in Pakistan's Limited Over games and has now been selected as part of the Test squad for the tour of Ireland and England.

In a recent interview, Fakhar Zaman spoke about his remarkable cricketing progress, his views on working with Mickey Arthur as coach, his message for those who do not consider him a serious fit for Pakistan's Test squad, how Pakistan intend to tackle the threat of James Anderson and Stuart Broad in their home conditions and why he feels his side will give a good account of themselves in the upcoming Test series against Ireland and England. 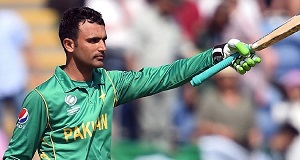 By Amir Husain (7th May, 2018)
PakPassion.net: It's been a remarkable journey so far for you in international cricket hasn't it?

Fakhar Zaman: It has been truly an amazing journey for me. I feel really good about how my career has progressed and for that I am truly indebted to the Almighty. I wouldn’t say that it's been an easy ride as it did involve some struggle on my part, but today I have got to a stage where I am part of the Test squad and I am looking forward to doing the best I can for Pakistan.


PakPassion.net: Did you ever think you would come so far in your cricket career?

Fakhar Zaman: When starting out, I was a little overwhelmed by the idea of playing international cricket as I did feel that there was a huge gap in quality between club or grade-2 cricketers and international players, but I later realised that this wasn’t the case. I suppose, like any new player, I had my self-doubts but all of those disappeared when I started to play first-class cricket and realised what I was capable of. During those times, I also played alongside Asad Shafiq and Sarfaraz Ahmed in a club in Karachi and when I compared my game to theirs, I came to the conclusion that there really wasn’t much difference in standards and that I too was as ready for international cricket as any other player at that level.


PakPassion.net: How would you describe the role of coaches in your development as a player?

Fakhar Zaman: All throughout my career I have been indebted to coaches and mentors, right from my days in the Pakistan Navy and up to the time I became a part of Pakistan A and the senior teams. I have had some technical difficulties in the past that were spotted and ironed out by the coaches at the NCA. And it's not just the coaches but the Pakistan team management who have gone out of their way to help me out. This special treatment continues for me even today where I am given so much care and attention when I go for training at the NCA. I suppose the results of this work by the coaches can be judged by where I am today.

PakPassion.net: Mickey Arthur has received criticism from some quarters, how do you feel about him as a coach?

Fakhar Zaman: I have been playing cricket at various levels for about 10 years and I have yet to work under the guidance of a Head Coach like Mickey Arthur who looks after his players so well. What Mickey does not compromise upon is commitment by players to the team. He has zero percent tolerance for that as he believes that if one wishes to play for the Pakistan team, they need to be a hundred percent committed to all aspects of the game, regardless of it being fielding, batting or bowling. For Mickey, there is no effort below hundred percent which a player should be giving for the team. I feel that the credit for the excellent performances of youngsters in our current team belongs solely to Mickey. This is because due to Mickey’s guidance, there is simply no place for being lax about our job and we are always focused on giving our best for Pakistan. If it was up to me, I would like to play my whole career with Mickey Arthur as my coach.


PakPassion.net: How disappointing was this year's Pakistan Super League for yourself and Lahore Qalandars?

Fakhar Zaman: Of course, when one’s team ends up at the bottom of the table at a tournament, one will feel very disappointed. I was also very disappointed in the way the tournament ended for us. It wasn’t any different last year for us and this year it was a little tougher for me as I was the Vice-Captain as well. We did seem to get back into form towards the latter stages of the tournament but by that time we had lost too many games and it was all a little too late.


PakPassion.net: So, exactly what went wrong for Lahore Qalandars this time around?

Fakhar Zaman: I feel the reason we could not do well this year was that most of our batsmen were the same type of stroke makers. I believe in a Twenty20 side you need some players who can see you through the innings which is something we were lacking. Also, our batsmen were not suited to conditions in Dubai although, to be fair, we did come close to scoring 200s at some points during the tournament. I am sure we have learnt our lessons and I do hope that we will make a stronger comeback in the next edition of the PSL.


PakPassion.net: Brendon McCullum seems to be a big fan of yours; What advice did he give to you during the PSL?

Fakhar Zaman: Brendon’s only advice which he repeated many times was to play a fearless brand of cricket and to express your skills and talents without worrying too much. Apart from that, I got to learn a lot from the way he prepared himself for the game and also in the nice way he behaves with the team members, regardless of their seniority.


PakPassion.net: How impressed were you with Shaheen Shah Afridi’s performances for Lahore Qalandars?

Fakhar Zaman: I was really impressed by what I saw of Shaheen Shah. He is still young, and I am sure he will improve more as he gets older and more experienced. He has been blessed with talent and what is most exciting about him is that he can swing the ball both ways at a good pace. I am convinced that he will be a great future prospect for Pakistan.


PakPassion.net: How does it feel to now be part of the Pakistan Test squad?

Fakhar Zaman: It is an amazing feeling to know that I have been considered worthy of being selected as part of the Test squad. Ever since I started playing cricket, it has been my dream to play Test cricket and now that dream could become a reality soon. This is a very exciting time for me as in my view, the Test format is the only ‘real’ format in cricket. I have done reasonably well in the Limited Overs format of the game and now I have a challenge ahead of me to play Test cricket and hopefully I can do that well and also establish myself in the Test team.


PakPassion.net: Do you feel you have the skills to succeed in Test cricket?

Fakhar Zaman: Let's be clear about something. cricket is played with the same kind of ball and bat around the world so there is nothing special about it, as long as you have the necessary skills. The main thing about Test cricket is that you have to adjust your game according to the match situation. I will have to do this to be successful in Test cricket and I will rein in my shots, if I have to, based on how the game is going at that point. Yes, if the situation demands it and I feel confident about it, I will go in to my normal aggressive mode of cricket. At the end of the day, this is what cricket is all about and I don’t want to make bold predictions, but I am hopeful that I will be able to perform well in Tests and help my team to victory as well.


PakPassion.net: Some believe that you aren't cut for Test cricket, what do you say to those critics?

Fakhar Zaman: To all those who have been critical of my selection for Tests, I will simply ask them to spend their time in praying for my success in Test cricket rather than criticising. Obviously, everyone has their own opinion on such matters and it is possible that in their view I am not suited for Tests, but this is something only time will tell. If I succeed in this format for Pakistan, it will not only be great for Pakistan but even they will feel good about it.


PakPassion.net: How tough will it be to play England in their own conditions and especially during early summer?

Fakhar Zaman: It’s difficult for me to say anything about playing Test cricket in England as I have no prior Test experience but what I will say is that looking at our bowling strength, even our opponents will think twice before preparing wickets which could easily favour us as well. So, the swing will not be a problem for us alone but will also affect England. This is something our coaching staff have been paying attention to during our preparations for the tour with usage of the Dukes ball. I feel that we have prepared well for whatever conditions we will encounter during the series.


PakPassion.net: Does Pakistan have the batting strength to fill in the gap left by the departure of Misbah-ul-Haq and Younis Khan, especially on this tour?

Fakhar Zaman: We definitely have the batting talent which can fill the gap left by the departure of these two great batsmen. It is very normal in all sides that players retire and are then replaced by other able players. If you look at the newer members of our Test squad like Saad Ali or Usman Salahuddin, you will see that they have been selected after some excellent domestic performances and have a good first-class record. It is our hope that our youngsters will not let us feel the absence of the retired players.


PakPassion.net: Are Pakistan capable of succeeding against James Anderson and Stuart Broad in their backyard?

Fakhar Zaman: There is still some time to go before the series begins and we are working hard to get ourselves in the right mindset for the conditions we will encounter in England. As far as Anderson and Broad are concerned, they will probably be a handful on their own pitches and we have been watching a few videos of them in our training. As the time to face them draws nearer, we will study their videos in more details to understand their strengths and weaknesses and work out a strategy to play them. I am convinced that we have the batting strength to not only play both of these bowlers with ease but also to put up big scores against them.
Discuss!