How far will Pakistan U19s go in the ICC U19 World Cup?

"Politics should have nothing to do with sports" : Misbah-ul-Haq

At the age of 44 years, the former Pakistan captain Misbah-ul-Haq recently became the oldest player to score a half-century in the T20 format of the game. His innings of 59 not out for his Pakistan Super League (PSL) side in the ongoing 4th edition of the tournament saw him take Peshawar Zalmi to an unlikely victory against Lahore Qalandars and earned him plaudits from the most cynical of his critics.

In an exclusive interview with PakPassion.net, Misbah-ul-Haq spoke about what still motivates him to play cricket, the issues behind Pakistan's poor showing in Test cricket, the priorities for the newly appointed PCB MD Wasim Khan, Pakistan's chances in the upcoming World Cup and why politics must never interfere with sports. 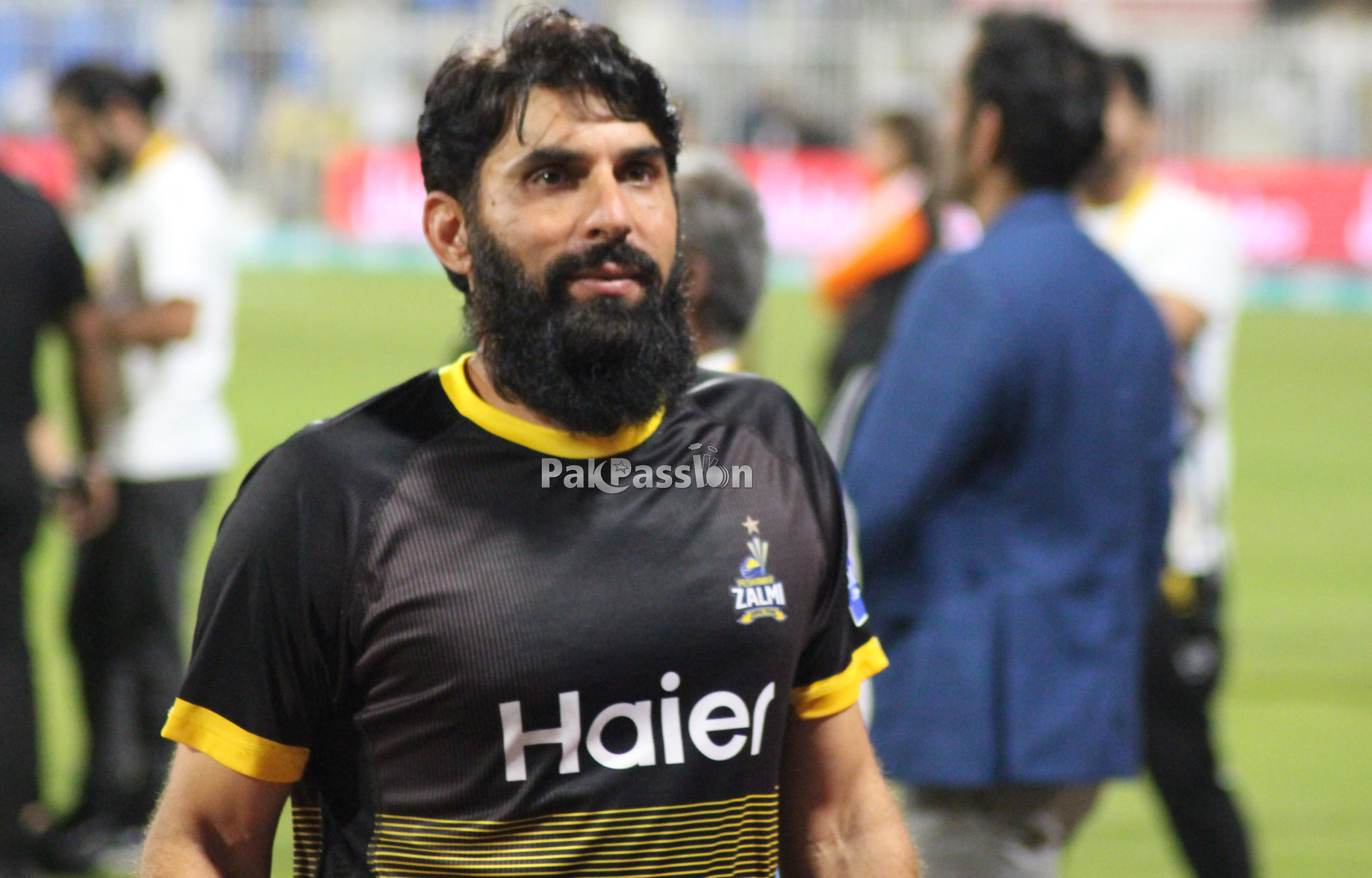 By Amir Husain (7th March, 2019)
PakPassion.net: What makes you go out there and play cricket at the age of 44 with the same passion as earlir in your career?
Misbah-ul-Haq: I believe it’s all down to one’s passion for the game and the enjoyment one gets out of playing cricket. These two things keep you going all the time and this is why I am still playing cricket. I played the First-Class season, and this is exactly what is driving me to play and give my best at the Pakistan Super League (PSL) for the fourth season in a row. The enjoyment factor for me is still there and I don’t mind going out there and putting in the hard-work needed to play this game otherwise, it's not any easier even at the age of 35 or 36, let alone 44! The fact is that if you lose interest in the game, then no amount of motivation will work in this case.


PakPassion.net: How has the PSL been for you with a new side, Peshawar Zalmi?

Misbah-ul-Haq: It's been a great experience and gone really well. Of course, it’s a new franchise that I am playing for and most of the players I am playing with are experienced professionals so there's not much difference as compared to my last side, Islamabad United. I suppose the colour of kit is different, but the professionalism is the same and I am really enjoying playing under the captaincy of Darren Sammy and alongside the likes of Andre Fletcher and Kieron Pollard. The team atmosphere is really good, and I am really enjoying the way we have progressed through this tournament.


PakPassion.net: Are you concerned that the Pakistan Test side is not in a good place at the moment?

Misbah-ul-Haq: It is definitely an area of concern for anyone who is interested in Pakistan cricket. When we play away from home, we can always say that it's tough playing in places such as South Africa where Asian teams struggle due to the conditions. However, the biggest concern is that we have been losing Tests in the UAE which is our home. We really need to put some efforts to get to the bottom of this issue and find out what problems we have which are causing us to lose at home. Obviously, we have to have a good look at our domestic cricket system to understand why we are unable to produce more quality spinners and batsmen who can play spin bowling with ease. It appears to me that in the last 10-12 years a lot of domestic cricket has been played on seaming tracks which is why we are struggling to produce good quality spinners. Given the nature of the pitches, the spinners are not getting enough time to bowl and similarly, the batsmen are getting lesser time to face spinners. With this background, our batsmen and spinners run into problems in the UAE as they don’t seem to have practice in this aspect of our cricket.


PakPassion.net: Is there a danger that Twenty20 tournaments like PSL are taking the emphasis away from Test cricket?

Misbah-ul-Haq: I really do not think we can blame PSL for any lack of good Test or 4-Day players coming out of Pakistan. And the reason for that is simply that PSL takes place once a year as does the National T20 tournament. Our bigger issue is that at the club, Under-13 and Under-16 level there is more T20 cricket and we need to see how we can make the youngsters play the longer formats of the game at that age or level. This will allow the batsmen to first develop proper techniques including their defence and then they can also play T20 cricket. Once again, I will emphasise the fact that our struggle in Test cricket is not just due to more T20 cricket being played, but because of the types of pitches being used. When our batsmen in domestic cricket don’t play enough spin, then they won’t be able to master this aspect of batting and also we will not see quality spinners emerge from such a system.


PakPassion.net: The Cricket Committee was created with a lot of fanfare by the PCB, but we hear very little about any actions or decisions they have taken?

Misbah-ul-Haq: We have had three meetings and have submitted our recommendations on topics such as playing conditions and umpiring, as well as on Women’s cricket. The recommendations were submitted to the Chairman of the Cricket Committee, Mohsin Hasan Khan, and I am not sure whether he has passed these on to the Chairman PCB Mr. Ehsan Mani or not. It is our hope that rapid progress will be made on these recommendations for the betterment of Pakistan cricket and we will see the beneficial effects in the next season. The quicker we move on to implement these recommendations, the better it will be for Pakistan cricket and delays in this process will only make things worse for us.


PakPassion.net: What should be Wasim Khan’s priorities as MD of PCB?

Misbah-ul-Haq: Unless we can improve the infrastructure associated with our game, we will struggle in all other aspects of cricket in Pakistan. We have to realise that our international cricket is based upon the raw material that comes from the lower-levels of cricket such as that found in domestic cricket as well as from clubs and academies in Pakistan. Until and unless there is improvement at these levels of cricket, we will always find it difficult to compete at the international level. This improvement, can only happen when the right infrastructure is provided and that in my view, should be the top-most priority for Wasim Khan. Besides that, he needs to devise strategies to market our cricket effectively as without proper finances, you cannot run this show.


PakPassion.net: Do you agree with Mickey Arthur where he recently mentioned the fatigue factor as something that could take a toll on Pakistan players and may have an adverse effect on our future results?

Misbah-ul-Haq: Look this is simply the nature of today’s version of international cricket. The pressures in terms of the mental and physical aspects of the game are always there but the team management as well as PCB’s administration should be able to look into this issue and figure out an effective way to manage the workloads of the players. It is possible that players can get mentally and physically fatigued and this could be a factor in their performances for Pakistan, but a balance is needed. It is important for players to keep themselves match-fit and if there are too many gaps between games then there is a real danger of losing rhythm and performances can be affected too. Playing too much cricket, on the other hand, can result in mental fatigue as well where a player can lose interest and he ends up going through the motions which really doesn’t help the cause of the team. The hunger to succeed can take a hit for a player if he plays too much cricket. This is where a balance is needed and for the management to monitor players constantly and to know when to rest players to get the best out of them and utilise them effectively.


PakPassion.net: How do you rate Pakistan’s chances in the World Cup?

Misbah-ul-Haq: Pakistan always has a good chance to do well in the Limited-Overs format. If we look at the 3-2 loss to South Africa in the ODI series, we will see that Pakistan were a little unlucky in some of the games and obviously the loss of the captain due to the ban was also a factor too. Overall, Pakistan in the shorter format of the game are generally very good and one hopes that the Champions Trophy win in 2017 would fill them with confidence as they compete in England in the summer again, but this time in the World Cup. On top of that the team has been together for more than a year and has gained experience and I feel that as always, Pakistan will be up there amongst the best teams in the tournament and will be a threat to all the top sides in the World Cup.


PakPassion.net: Is it dangerous to mix politics and sports as we have seen done in recent times?

Misbah-ul-Haq: Politics, in my view, is a separate subject and should have nothing to do with sports. There is no connection between both of these ideas. When you enter a sports ground, you compete fairly and in a healthy atmosphere against your adversaries and test your skills against the opponents in good spirit. As a sportsman, you are expected to perform at your best and entertain the spectators which is what they expect of you, and really there is no question of bringing any notion of politics in sports.
Discuss!