"I am convinced that I will make a name for myself for Pakistan in the future" : Zahid Mahmood

Hailing from the city of Dadu in the interior of Sindh province, leg-spinner Zahid Mahmood has been in excellent form in the ongoing domestic season. In the recently concluded National T20 Cup, Zahid's 12 wickets in 9 games were instrumental in taking his side, Southern Punjab, to the final of the tournament. He is currently one of the leading wicket takers in the 4-Day Quaid-e-Azam Trophy tournament with 24 wickets to his name.

In an exclusive interview with PakPassion.net, Zahid spoke about why he considers Imran Tahir, Rashid Khan and Fawad Ahmed as his role models, the reasons behind the absence of players from interior Sindh at the top levels of Pakistan cricket, his experience of playing in the Pakistan Super League, the secret behind his success at the domestic level and his hopes of finding a place in the Pakistan national side. 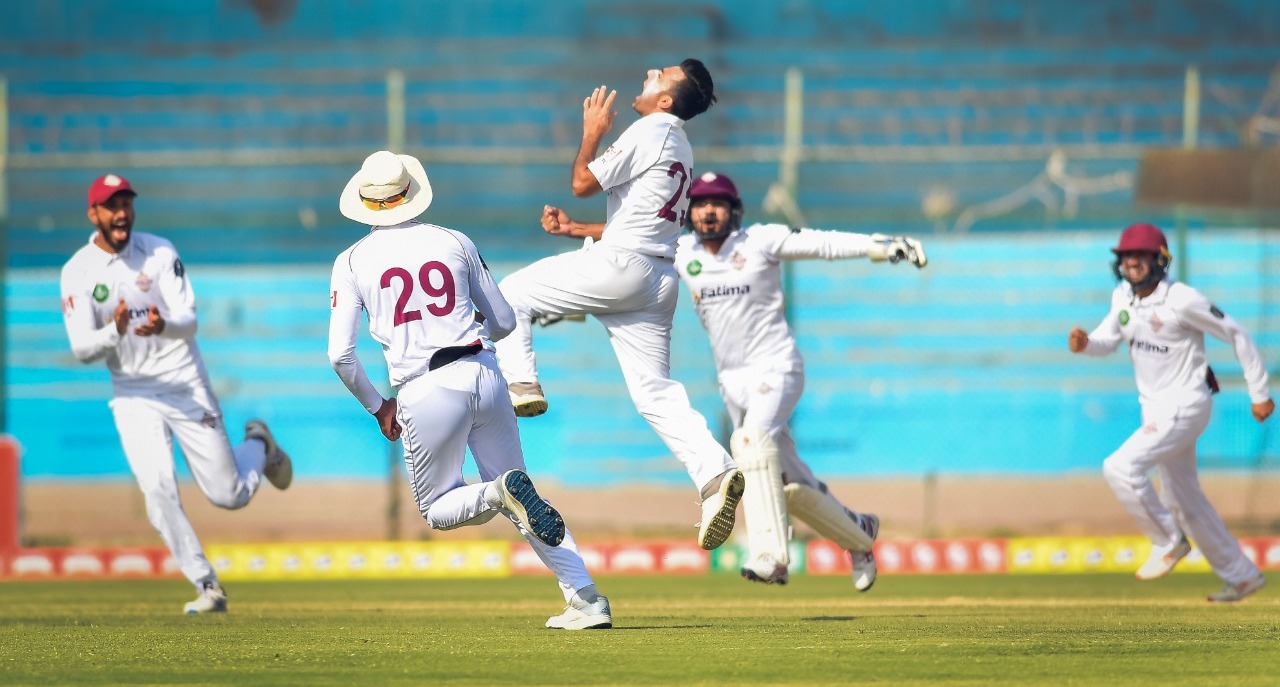 PakPassion.net: Tell us about how you developed an interest in cricket?

Zahid Mahmood: I was born in Dadu in the interior of Sindh, which isn’t a city well-known for any cricketing heroes or greats, so my interest in the game was purely down to the influence of my elder brother who had played district level cricket. It was by watching him play that I decided to take up cricket. Unfortunately, due to financial pressures, my brother gave up cricket, but he made sure by giving me support and given my talent and passion, I would continue to play the game. Once I found my feet in hard-ball cricket, I played at district Level, then made my First-class debut in 2009 for Hyderabad, and was playing for State Bank of Pakistan until departmental cricket came to an end last season. I am also proud to say that I didn’t really give up my education and have completed a BA degree as well.

PakPassion.net: Which bowlers do you admire and consider as your role models?

Zahid Mahmood: I did not have any role models when I first started playing cricket. At that time, the idea was to just bowl in the way I felt comfortable, but once I grew a little older, I started to take notice of Imran Tahir’s bowling and he was my first role-model. In more recent times, I have become a great admirer of the bowling of Rashid Khan and have learnt a lot from watching his videos. During PSL 5, I did get to meet Imran Tahir who was playing for Multan Sultans and picked some valuable tips from him. Of course, Fawad Ahmed who was my team-mate in Quetta Gladiators was a great help and someone who I learnt a lot from. At the NCA, I have also worked with the legendary Mushtaq Ahmed and his guidance has been extremely valuable for me. I am also very good friends with Shadab Khan and always compare notes with him as I do admire his bowling as well.

PakPassion.net: Whilst you have done well yourself, there does seem to be a shortage of cricketers from interior of Sindh who have played at the highest level?

Zahid Mahmood: There are many reasons for that but the most important one is that the amount of cricket being played in interior Sindh isn’t that much as it is in the bigger cities like Karachi and Hyderabad where teams for departments used to be based. But let me remind you that there have been some big names from the interior of Sindh who did well in the past such as Shahid Qambrani who played 96 First-class games. In more recent times we have another player from Dadu, Aamir Ali, who has played for Pakistan U19s and is currently taking part in the Quaid-e-Azam Trophy for Sindh 2nd XI, as is Shahnawaz Dhani from Larkana who is playing for Sindh First XI. So, there are Sindhi cricketers from the interior who have done well and are continuing to do well.

PakPassion.net: Are you hopeful that younger players from the interior of Sindh may use your success as inspiration?

Zahid Mahmood: I am sure that my success will help others from interior of Sindh think that with hard work, they can also play cricket at a high level in Pakistan. What really pleases me is that whenever I go back home to Dadu, players come to see me and ask me about my experience and I am sure what they hear helps them think that they have a good chance of making it to the top. Hopefully, we will see more emerging talent from all parts of Sindh show up in top teams in Pakistan in the future.

PakPassion.net: What was the experience of playing in the PSL like?

Zahid Mahmood: It was an amazing experience to play for Quetta Gladiators in this year’s PSL. Whilst the one game I played against Lahore Qalandars was a little one-sided as we scored just 98/9, the overall experience of sharing the dressing room with world-class players was something that I really enjoyed. I was also given a lot of encouragement by our Head Coach Moin Khan and by captain Sarfaraz Ahmed during the tournament which really helped me find my feet in PSL.

PakPassion.net: What was it like playing alongside Fawad Ahmed?

Zahid Mahmood: Fawad was one player who really helped me out during PSL 5 and took it upon himself to mentor me and teach me about spin bowling. He would advise me a lot and also appreciated my style of bowling as well. And even after Quetta’s participation in the 2020 tournament ended, Fawad has kept in touch with me to guide me and continues offering me advice on my bowling.

PakPassion.net: Was the fact that you were not named in the 35-member squad for Pakistan’s tour of New Zealand a matter of disappointment for you?

Zahid Mahmood: Look one can only worry about things which are in one’s control. From where I stand, all I can do is to continue to work hard and keep on performing well. I am convinced that whilst I did not make it to the squad for the tour of New Zealand, I will make a name for myself for Pakistan in the future.

PakPassion.net: What is the secret for your fantastic performance so far in this domestic season?

Zahid Mahmood: As my records show, I have always done well in T20 games. But this season my team Southern Punjab reached the final also, and the matches were televised which highlighted my performances and gave the impression that I had an extraordinary season. I have always believed in hard work and that is what I will keep on doing in the future too.

PakPassion.net: In particular, your First-class statistics this year have been amazing which must have pleased you to no end.

Zahid Mahmood: It’s been an amazing season for me so far and there are some performances that stick in your memory when you do well and for me, the match figures of 10/98 that I took against Northern in my first Quaid-e-Azam trophy game this season was a career best performance which is something I will remember for a long time. There were some very good wickets that I got such as those of Asif Ali in each innings. And bowling alongside a master bowler like Mohammad Abbas was also a great experience for me and something I enjoyed a lot.

PakPassion.net: Do you feel that wickets have been supportive of your style of bowling during this season?

Zahid Mahmood: I don’t think that is the case at all. Whilst wickets in Karachi do support bowlers, the fact is that at the NBP Sports Complex ground where I took 10 wickets in the match, Mohammad Abbas also picked up 10 wickets on the same surface. To me, it’s just a question of bowling well and if you bowl well, regardless of the type of bowler you are, you will get more purchase and end up with a lot of wickets.

PakPassion.net: Given you have been playing First-class cricket since 2009, what major differences have you seen in the quality of cricket after changes to the domestic system in 2019?

Zahid Mahmood: Obviously with the reduction of the number of sides the quality of the competition has definitely improved. For any player who is taking part in domestic cricket, gone are the days when he could take it easy as each game is very challenging and only the toughest players can survive in such an environment. That in turn, is great news for Pakistan cricket as that means that any player doing well in this system has a good chance of serving the country at the international level. I do sympathise with those who say that many cricketers have lost their livelihood due to reduction of teams but the fact is that, as in life, only those who can do well will make a place for themselves. For us cricketers, it’s better that instead of worrying about the system, we should concentrate on what is under our control which is to put in good performances.

PakPassion.net: Who, in your view, are the toughest batsmen to bowl to in Pakistan?

Zahid Mahmood: I have bowled to a lot of top-class batsmen during my First-class career and haven’t found too many who I had any problems to bowl against. The only two players who stand out in my head as tough competitors are Mohammad Hafeez and Kamran Akmal due to the aggressive nature of their stroke-play.

PakPassion.net: At 32, you must be a little disappointed that you still haven’t made it to the national side?

Zahid Mahmood: Since my First-class debut in 2009, I have played for Hyderabad, Peshawar, State Bank of Pakistan and Southern Punjab. Whilst I played good cricket in the intervening years, it was only from 2018 onwards that I really made a mark at the highest level in domestic cricket. I raised the level of my performances from that period and I suppose became more experienced and gained maturity as well. Why I have not been able to find a place in the national side is something I cannot explain, but for me the only way forward is to continue performing like I have been in recent times. As far as my age is concerned, I feel that as a spinner you only mature when you get to 30. From what we have seen, spinners can play on until they are 40 or so. We have examples of Saeed Ajmal and Muttiah Muralitharan who continued playing well past 30, and so I am also looking to stay in cricket for as long as I can.