"My sole aim is to make a strong comeback for Pakistan" : Umar Gul

Regarded at one time as Pakistan's yorker specialist, Umar Gul originally shot to fame in Test matches when he took 6/96 against arch-rivals India in 2004. Courageously battling injuries and a disappointing dip in form, Gul has so far played forty-seven Test matches in which he has taken 163 wickets and also claimed 173 scalps in 126 ODIs. His record in T20Is is an extremely impressive one with 83 wickets picked up in only 58 games. Gul last played for Pakistan last year against Bangladesh, but still remains a huge favourite with fans. His recent form in domestic cricket has been impressive and another comeback is something that he’s hoping for.

In an exclusive interview with PakPassion.net, the thirty-one year old spoke about his career so far, his memories of the victorious World T20 campaign in 2009, his thoughts on the standard of fast-bowling in Pakistan and Mohammad Amir's chances of making a comeback into international cricket. 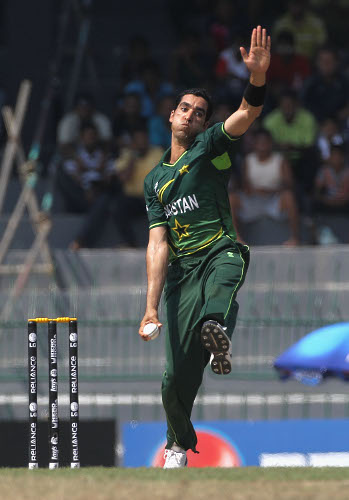 PakPassion.net : What would you describe as your career “highs” or ”lows” or, was there a time when you lost hope?

Umar Gul: As a player representing Pakistan, it is an honour to play for one's country and we have to deal with all of the various situations. I have never felt any disappointment in any part of my career. Highs and lows are a part of life and even when I wasn’t in the national team, I was working towards getting back into the team as it is always a great honour to play for Pakistan. Victory and defeat are what sportsmen face at every stage of their career but as for the feeling of disappointment, there could have been none bigger than the loss of the 2011 World Cup semi-final. Apart from that, I have never felt any reason to complain and am thankful for whatever the Almighty has provided for me.


PakPassion.net : Who has been the most difficult batsman to bowl to and what do you feel was the most prized wicket that you ever claimed?

Umar Gul: I have played a lot of international cricket and bowled against some top quality and the world’s best batsmen but the one that I found the most challenging to bowl at was the great West Indies batsman, Brian Lara. I did get his wicket three times in seven matches but let me say that he was the toughest opponent I bowled to and he also happens to be my favourite batsman. Needless to say, his wicket was also my prized wicket and something I will always be proud of taking.


PakPassion.net : How did the stress fracture come about and how did it effect your bowling ?

Umar Gul: The issue was caused due to my bowling action. This was the reason why I got a stress fracture in 2004 which caused my absence from international cricket for more than a year. I put in a lot of hard work and practice and my recovery was very good. I felt that I made a strong comeback after that unfortunate injury. One can say that this injury was a blessing in disguise as it gave me some rest and I was able to train more which was beneficial for me. When I did eventually come back into international cricket, I went from a bowler who could bowl at 135Kph to someone who could hit 140-145Kph.


PakPassion.net : How was it bowling alongside Shoaib Akhtar who to this day remains the fastest bowlers in the history of cricket?

Umar Gul: Undoubtedly, I had a great time bowling not only with Shoaib but also with the likes of Mohammad Sami; the experience was incredible and most enjoyable. When we speak of Shoaib Akhtar, it goes without saying that he was our senior bowler and was a great help for juniors as well. The fact is that the extreme pressure exerted on the opposing batsmen by Shoaib Akhtar would yield wickets for the rest of us. This was because the batsmen would try and relieve the pressure off the other bowlers and would invariably lose their wickets due to errors caused by desperation to score runs. He was an excellent teammate and a very helpful human being as well and it was an honour bowling alongside him.


PakPassion.net : The victory in the World T20 in 2009 must stand out as one of the best memories of your career, what do you remember most from that time?

Umar Gul: As you will recall, we did not do that well in the group matches but once we went into the super-eights, the team started to believe in themselves and we kept on improving until we got to the knock-out stages. We obviously learnt a lot from our mistakes in the earlier stages and went on to win the trophy. Personally speaking, the over that I bowled against South Africa in the semi-final where I bowled six yorkers was the most memorable one. I was in my zone and it didn’t matter which batsman was in front of me in that over, I kept on bowling near perfect yorkers.


PakPassion.net : How did you feel when Daniel Vettori cast some doubts about your exceptional bowling against New Zealand at the World T20 in 2009?

Umar Gul: One can only react to such allegations when some evidence of ball tampering is presented such as a video recording or proof of that nature. Without that, it’s just empty words. How was it that only I could reverse swing the same ball which was being used by other bowlers as well? The fact is that this is an art and not every bowler can do that. It is no secret and very disappointing that whenever Pakistan does well, allegations such as ball tampering are made. In my view, these are just feeble excuses. If it’s not ball tampering, then bad umpiring is used as an excuse. These things did not bother us then and we just concentrated on our own performance and the results of the tournament were there for all to see.


PakPassion.net : How did you develop such expertise in reverse swing?

Umar Gul: When I was young, I used to practice for hours with tape-ball. Once the tape got worn out, we would be able to bowl yorkers and then when I moved to hard ball cricket, the influence of Wasim Akram and Waqar Younis from videos was enough for me to learn the art of reverse swing.


PakPassion.net : How difficult was it to repeat the form of the World T20 tournament of 2009 in the later stages of your career?

Umar Gul: I think I did well for a few years after that which included the time of the 2011 World Cup in India where Shahid Afridi who took 21 wickets and I with 14 wickets were the main wicket takers for Pakistan. I suppose when I got my knee injury in 2013 is when my form dropped but that is all behind me now. I am feeling much better and have already taken 23 wickets in 5 matches in the current edition of the Quaid-e-Azam trophy. My sole aim is to make a strong comeback for Pakistan with good rhythm and some good domestic performances under my belt and I feel that I am making good progress towards that goal.


PakPassion.net : Watching current Pakistan Test bowler Imran Khan is like watching a clone of you, that must feel strange?

Umar Gul: More than feeling strange, I must say that I am honoured by the fact that here is a fine young bowler who is following me or considers me a model for his own bowling action. He is from my own city, Peshawar and we talk a lot but not on this topic. Like I said, I am just pleased that he thinks so highly of me so as to copy my bowling action!


PakPassion.net : Are you satisfied with the standard of Pakistan's fast-bowling at the domestic or national level, especially in light of the way our bowlers were treated in the 4th ODI against England?

Umar Gul: There needs to be a lot of improvement in our fast-bowling department. In that game against England, we saw how our bowlers were attacked in the final ten overs and this shows to me that we are lacking experience in that department. They will need to understand how to handle pressure in such situations, or we won’t survive at this level. As far as the standards of our fast-bowling are concerned, I am afraid that I have yet to see any outstanding bowler on the domestic scene who I feel could walk into the national team, so yes we have a problem, a big problem. The only real way to fix this issue is for bowlers with international experience to work with their colleagues in domestic teams and help them come up to the standard which will allow them to be selected for the national team. The responsibility then also lies with our senior players as they should be spending time with the domestic players to help them develop into better players.


PakPassion.net : Do you think Mohammad Amir deserves a second chance for Pakistan?

Umar Gul: I think it will be unfair if Mohammad Amir comes back and takes the place of a player who has been performing well. However, I don’t think Amir can just walk in and displace a player who has done well. The selectors will not simply drop a player to make a place for Amir. It is not that easy to walk back into the national team as apart from fitness and performance, there are other factors which may delay his return to the national squad. From what I understand there are players who are not willing to share the dressing room with him. As for my personal opinion, I will leave it to the selectors and the PCB but I will reiterate that there are a few hurdles that Amir has to clear before he can make a comeback into the national team.