"Very disappointing and surprising that I've not played a single match in the PSL" : Mukhtar Ahmed

The aggressive opening batsman spoke about his impressive displays in the National T20 Cup and expressed his desire to play more matches for Pakistan in future. 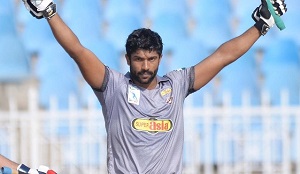 The somewhat unexpected rise in Pakistan’s limited overs fortunes which was triggered by their victory in the Champions Trophy this summer seems to have produced some great dividends.

The rise in rankings for Pakistan in ODIs as well as reaching the number one position in T20Is is of course a matter of pride for the country but the bigger benefit seems to be in the renewed wave of enthusiasm at the domestic level where players are looking to be part of Pakistan cricket’s success story.

24-year-old Sialkot born Mukhtar Ahmed’s golden run at the ongoing National T20 Cup where he scored 305 runs in 7 matches at an average of 43.57 and at an incredible strike rate of 178.36 is surely one that selectors and fans of Pakistan cricket would have watched with great interest.

Whilst his team FATA was beaten in the semi-final of the National T20 Cup, the manner in which Mukhtar scored his runs is a matter of great satisfaction for the opening batsman as he explained in an exclusive interview with PakPassion.net.

“I've been very happy with my form during the National T20 Cup. I've felt confident and have been striking the ball well. It's not easy to score a century in the T20 format and I was really pleased with my 117 against Karachi Whites. I've been hitting the ball cleanly during this tournament and when you do that it gives you confidence and a lot of self-belief.”

Ever since the unfortunate departure of Sharjeel Khan and the recent disappointing form of the Champions Trophy hero, Fakhar Zaman, Pakistan have been in search of a truly aggressive opener who can thwart the opposition with ease. Mukhtar’s approach to batting is exactly suited for the Twenty20 format and his ability to hit the ball seems to be exactly what any T20 team needs in its arsenal.

“My batting style is known to everyone and my statistics are there for all to see. I have three T20 centuries and my strike rate is over 150. I like to attack the opposition bowlers and try to put them under pressure. I think on my day I can be a match-winner, but I need to add more consistency to my game and that is something I have been working on with my coaches.”

The success of Mukhtar at the National T20 Cup in 2017 where he is currently ranked the 3rd highest run-scorer is a reminder of the type of talent that the audience would like to see more of. This is something Mukhtar is painfully aware of, “I feel that I have missed too much cricket of late for various reasons, but I want to put all that behind me and play regularly in all formats. I am only 24 but I've been around in domestic cricket for over 5 years, so I have a lot of experience. It's now time for me to settle down and prove my critics wrong and show maturity.”

The advent of the Pakistan Super League in 2016 has been nothing short of a revolution in the world of Pakistan cricket. For talented players like Mukhtar, the PSL represents a unique platform to showcase their talents but the fact that he is yet to play for any of the franchises is puzzling.

There is a silver lining in place for Mukhtar due to a recent modification in draft rules which have allowed for a vacancy of one more player in PSL team line-ups which offers the batsman a chance to make his mark in the PSL.

“There's a chance that I could yet be picked for the Pakistan Super League as the 21st player for one of the squads and I really hope that happens. It's a huge tournament and one where I feel I can show my talent. All players want to play in the PSL so all I can do is hope that my chance comes this time around.”

One can only imagine the pride Mukhtar must have felt when he was given the chance to represent his country for the first time in 2015 in a T20I game against Bangladesh. The promise of his talent impressed all who watched his first innings for his country. It was therefore a matter of great disappointment for all, including Mukhtar himself, that he did not continue to find a permanent place in the Pakistan team.

"People forget that I actually average 32 for Pakistan in the 6 T20Is that I played in. I also scored 2 fifties for my country and was then dropped. However, these things happen, and you have to take it on the chin and work hard. You have to look at your weaknesses and work on them and ensure that you improve and learn from your mistakes."

Mukhtar Ahmed's international debut is now a matter of history and the fact that he has yet to play more than 6 games for his country does appear odd for a man of his batting talent. Whilst it would be easy to delve on the past and wallow in self-pity, Mukhtar is quite happy to focus on the future and is convinced that the only way forward is to continue putting in performances of the type he put in the semi-final of the ongoing National T20 Cup where he scored 47 off just 22 balls, and the opportunity to represent Pakistan will present itself. “My aim is to score lots of runs in domestic cricket and to once again catch the eye of the national selectors. I feel I can still offer Pakistan a good and attacking option at the top of the order in the limited overs formats, but as I say, I need to score lots of runs in domestic cricket and show consistency. Having played 6 T20Is, the desire is there to play more matches for my country, but let's see, let's take it one step at a time”, he concluded.