"Delighted to have been picked by Mumbai Indians" : Evin Lewis

Evin Lewis spoke about his meteoric rise in the Twenty20 format and whether there is pressure upon him to be considered as Chris Gayle’s successor. 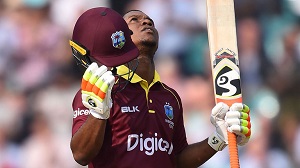 Chris Gayle’s mystical abilities to deposit the ball into the far reaches of any stadium has become an abiding part of cricket folklore and there is a possibility that with advancing years, the world of cricket could soon be saying goodbye to the man termed ‘Universe Boss’. But there is some good news from the Caribbean and that is the emergence of another West Indian opener, 12 years Gayle’s junior, who is powering his way to replicating the devastation brought on by Gayle when he is in full flow.

Evin Lewis may not yet have the same style and swagger of his illustrious West Indian team-mate but make no mistake, he has all the makings of future greatness if his current rise in the Twenty20 format is any indication. The left-handed opening batsmen appears to be a well-established name in the Twenty20 circuit and already has 3 hundreds to his name, including 2 that he has scored for the West Indies. His strike rate of over 146 in the twenty over format is also a good example of why he is held in such high regard in the shortest form of the game. And as if not content with one format, he has also hit two One-Day International hundreds including a 176* which is the fourth-highest ODI score for a West Indian batsman, which does make him a wanted name in cricket’s most lucrative format.

In an exclusive interview with PakPassion.net, Lewis spoke about his meteoric rise in the Twenty20 format, whether there is pressure upon him to be considered as Chris Gayle’s successor, his interest in playing Test cricket and his wish to help West Indies qualify for the 2019 ICC World Cup.

For any young player to score a hundred in just his second T20I must be a special occasion. The achievement takes special weight when that happens against one of the top teams of the world as in the case of Lewis’ brilliant century against India.

“It was a great feeling for me to score that hundred against India. I was up against some top bowlers from India such as Ravi Jadeja, Mohammad Shami and Jasprit Bumrah but to score a hundred in just 49 balls and also contribute to our team’s victory was something very special and memorable for me” stated Lewis.

The inevitable comparisons with Chris Gayle are obviously a result of Lewis’s run-scoring abilities but the young batsman is showing remarkable maturity by not getting carried away with such praise as he explained, “Chris is an absolutely fantastic name in world cricket and to be compared to him is a real honour but as far as I am concerned, there is no pressure on me as I just go out there and be positive. This is my style of play and that’s how I play my game.”

Lewis’s ability to effortlessly hit sixes is fast becoming popular with fans around the world. He has so far hit 58 sixes in his international career, with his Twenty20 six count already at 178 after just 84 games. So how does he do that?

“There is no real secret to it. Simply put, it’s just the bat speed and timing of the ball which gets me those sixes.”

Given the comparisons to Chris Gayle’s prowess as a smasher of the ball, it is no surprise that many youngsters will look to him as their role model and Lewis is no different as he remarked, “We have been fortunate to have some huge legends of the game play for West Indies and I like many other players of my generation have always looked up to the great Brian Lara and of course, Chris Gayle.”

Many of the world’s finest cricket players have honed their skills at the County level which has really been the nursery for refining cricketing skills for players of many nationalities. Whilst Lewis has been performing well in the Twenty20 format, he is aware of the importance of a stint in County cricket.

The West Indies team under Jason Holder’s leadership has shown some improvement in the Test format, especially with the victory in the Headingley Test during the England tour. Whilst the general impression surrounding West Indies cricket may revolve around a preference for the shorter formats of the game, Lewis is convinced that there is much more to Caribbean cricket then just one format, as he explained, "No one team can claim to be the best in one form of cricket but the West Indies is in a good place now as they have some quality in every style of the game, not just the shorter form."

Over the years, the Indian Premier League has assumed great importance to cricketers around the world due to the financial rewards as well as the opportunity for exposure at the global scale. To be picked for any team in the IPL is nothing short of an achievement given the competition for places but as Lewis explained, to be picked by last year's champions for a very generous 3.8 Crore Indian Rupees is indeed a special opportunity for the Caribbean star to shine and showcase his talent to the world of cricket.

"I am obviously delighted to have been picked by Mumbai Indians. After the year I had, I was looking forward to seeing how the auction unfolded and I’m honoured and very pleased to know I’m going to be part of such a successful franchise which was the winner in the 2017 edition of the IPL. It should be great fun playing in the IPL and it's something I have been keen to take part in."

At the age of 26, Ewin Lewis is in the prime of his batting powers and is clearly looking to dig deep and deliver more for whichever side he represents. Whilst Pakistan Super League fans will be disappointed to hear that Ewin Lewis will not be participating in the third edition of the Twenty20 tournament this year, the fact remains that whether it’s the West Indies side or any Twenty20 League, the raw talent and batting abilities of Lewis are always ready to shine, “I am really looking forward to helping the West Indies qualify for the World Cup in 2019 by winning in the qualifiers which start in March of this year. It would be a great achievement for me if I can contribute to this cause. West Indies is a proud cricketing region and I will do my utmost to help us qualify for the major tournament that the World Cup is. Regretfully, I will not be taking part in the PSL this year but I would like to reassure fans that whether I play for the West Indies or any Twenty20 league, my intention is just to be the best cricketer I can be”, he concluded.