"I plan to represent Australia in the World Twenty20 in 2020" : Usman Qadir

The son of the legendary Abdul Qadir spoke about his frustration with the system of selection in Pakistan and discussed his plans to obtain Australian citizenship. 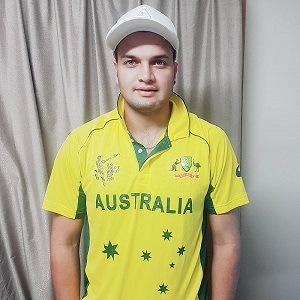 With the weight of expectations placed on his shoulders by virtue of being the son of the legendary Abdul Qadir, the 24-year-old Usman Qadir has had to endure some testing times in the past few years. The inability to break into the national side has been a source of great frustration for the young leg-spinner and it would appear that his patience with Pakistan’s system of selection even at domestic level has reached its limit as he spoke in detail about his plans to apply for Australian citizenship in an exclusive interview with PakPassion.net.

“I was offered Australian citizenship back in 2012 around the time when the Under-19 World Cup ended. At that time, I did not accept the offer on the advice of my father, as he felt that I had done well at the Under-19 level and had a bright future ahead with the Pakistan side. I went back to Pakistan and was ignored for selection from the national side. I then told the Pakistan Cricket Board that I am going back to Australia which prompted them to add my name to the Pakistan squad for the 2013 tour of West Indies. However, very close to the time of departure for the squad, my name was removed without any reason due to what can only be described as a case of ‘dislike’ for a certain player. It did not stop there, I was ignored for selection when I performed for Pakistan A even after I out-performed the likes of Yasir Shah. Later on, I was inducted in the Lahore Qalandars squad for the Pakistan Super League in 2017 but once again, I was not played in even one game. I recently came over to Australia a few months ago with Lahore Qalandars along with some other players too. Make no mistake, I really admire players like Salman Irshad and his performance in Grade B cricket in Australia, but despite my excellent Grade A cricket results in Australia, he was preferred over me for this year’s PSL by Lahore Qalandars, purely due to political reasons. But, thankfully, I am not concerned by all that as I now have a chance to play in Australia, thanks to former Australia player Justin Langer’s advice and assistance. I want to make my father proud, but I cannot do that by languishing in Pakistan and waiting for opportunities which will never arise.”

The prospect of Usman playing in Australia must be a matter of concern for Abdul Qadir whose services for his country are well known. Indeed, it had been Abdul Qadir who had first advised Usman to seek his fortunes in the country of his birth. It would appear that, even the die-hard commitment of Abdul Qadir to ensure his son represents his country seems to be wavering as Usman explained.

“I think my father was shocked and taken aback in the manner I have been ignored by the selectors in Pakistan and reality seems to have set in. I reminded my father that I had never depended on nepotism or connections for selection as there was no challenge in that for a cricketer like me. I think even a steadfast patriotic person like my father finally saw the light and told me that I should seek my fortune in Australia and I would have his full support.”

Whilst leaving one’s country of birth and making Australia his home may look like a daunting move for any young player, Usman has a plan to make this a reality and is clear about his next steps, “My goal is clear. I plan to represent Australia in the World Twenty20 in 2020 in Australia. I wish to use the same process of acquiring the ‘Distinguished Talent Visa’, which Fawad Ahmed also used to allow him to play for Australia. This visa allows any talented sportsman to gain permanent residency in Australia and this is the path I wish to follow as well.”

Having the desire to play for a country like Australia is an admirable goal but as Usman Qadir explained, he believes he also has the talent and skills to beat the tough competition in Australia to find a place in the national team and make his wish come true.

“One must always have confidence in one’s abilities. This has always been the case for me and for a good reason because as my stats from Under 19 or Pakistan A tours prove, I have always performed in an outstanding manner. I am fortunate to be hoping to play in a system which is structured to ensure that the best talent comes to the fore. They keep an eye on each player in the system to monitor his performance; they even keep an eye on which batting position a player is batting in. No small detail escapes the eyes of the administrators in Australia. What I am really looking forward to is to show the world that I will be moving ahead in my career based purely on my talent and not due to connections which seems to be the case in Pakistan. It is a little sad though that even if I do succeed in Australia, many people will still say that Usman is Abdul Qadir’s son and that is why he is playing there. Unfortunately, no one will talk about the hard work which goes behind success in a place like Australia.”

Of course, Usman Qadir will not be the first or the last Pakistan player to have left his country to explore better prospects for himself elsewhere. The case of Imran Tahir serves as an excellent example of a player who was struggling to make a name for himself in Pakistan but has become famous since his migration to South Africa. For Usman Qadir, there can be no better example than Imran Tahir to show him that success is possible by moving to another country where he is appreciated more.

“Imran Tahir has shown how one can rise to the top by moving to an environment where one is valued for his skills and not whom he knows. He is like a brother to me and we speak on a regular basis and his advice on my move to Australia will always be very useful. He isn’t the only one I ask for advice as I have an excellent network of family and friends who are there to help me out.”

Leaving one’s home country and settling in a foreign land to play cricket for Australia sounds like a tough task in emotional terms, but for Usman Qadir there is no element of guilt involved in this decision as he feels that he has suffered a lot due to the vagaries of the system in Pakistan. Whilst he will be the first one to acknowledge his roots, he has no remorse about moving to what he sees as greener pastures where he has a chance to shine and prove his mettle, “I have no regrets at all about making the move to Australia as I have tried my best in Pakistan and all doors to selection have been systemically closed on my face. I will take this next part of my career as a challenge to face and overcome, in the same way I have done so far. It seems that in Pakistan being related to a famous former cricketer disqualifies you from selection, in the same way it’s to others. In Australia, there is no such issue where players like Shaun Marsh and Mitchell Marsh are representing Australia. The same applies to Mark Waugh’s son as well. But in Pakistan, this seems to be an issue and players like I suffer due to this. All this is in the past and my goal now is to play for Australia in 2020 and I know that I am in a place where my performance and not petty politics will decide my future”, he concluded.