Sarfaraz Ahmed can redeem himself as Pakistan skipper in England Tests

Writing for Sky Sports, Saj profiles a battle-hardened Sarfaraz Ahmed who now has the chance to prove he can rise to the challenge of captaining Pakistan in all formats. 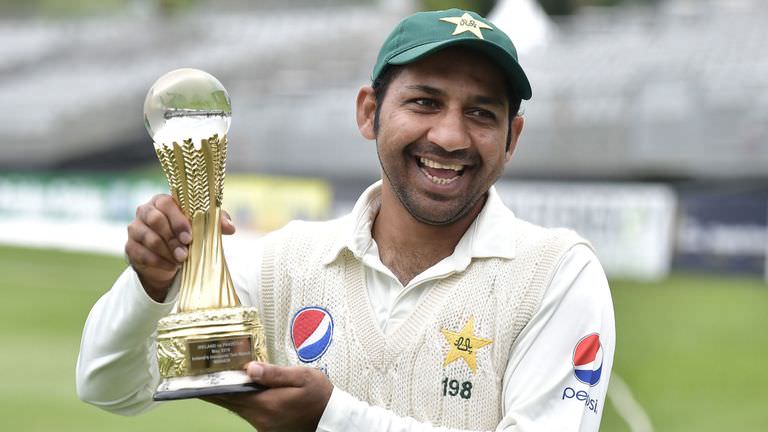 As the indefatigable Misbah-ul-Haq walked off the cricket field after playing his last international game in May 2017, he left behind an impressive legacy of victories and worldwide respect for Pakistan cricket.

The road to Pakistan cricket's resurrection since the shameful events of 2010 had not been an easy one and the work that Misbah did with his resilience and single-minded determination was going to be a tough act to follow for any successor.

Although Pakistan's rise as a viable force in Test cricket under Misbah was a great achievement, it would be fair to acknowledge that Pakistan's less-than-ideal progress in the shorter formats of the game during the same period was a source of great concern to the Pakistan Cricket Board. Change was therefore needed at the helm of affairs for the one-day and Twenty20 teams to help Pakistan gain some momentum in these formats.

The PCB initially, on the advice of Misbah, chose Azhar Ali for the job as one-day captain but given his struggles, quickly came to the conclusion that the experienced batsman was not the best man for the job of leading a volatile and unpredictable team such as Pakistan.

Sarfaraz Ahmed was therefore elevated to the position of captain firstly in ODIs in 2015 and then T20Is in 2016. This was a move which was not really a surprise to many who had followed his career progress as Sarfaraz as captain in 2006, had shown his leadership potential to the world and captured the hearts of his countrymen by leading his side to win the ICC's Under-19 World Cup trophy with a memorable victory in the final against India.

Even back in 2014, Misbah had realised Sarfaraz's potential as a leader, when he described the wicket-keeper as 'Oxygen for the team' based upon his ability to take on tough situations and his never-say-die-attitude.

While Sarfaraz took over leading the one-day and T20 sides, his choice as Misbah's successor in Tests was therefore an easy one for the Pakistan Cricket Board. His promotion to Pakistan Test captain was no huge surprise and was met by and large with approval.

With some fighting performances in Test cricket under his belt such as the one against Sri Lanka where he scored 103 in 2014, or 109 against Australia where he helped inflict a humiliating 221-run defeat on a powerful Australian side in the UAE, Sarfaraz has time and again proved his credentials as a more than capable middle-order batsman. Averaging over 40 with the bat in Tests, Sarfaraz has also been a great source of valuable runs in the middle-order.

The challenge to lead Pakistan in more than one form of the game is a tough one and not many Pakistan captains have managed success when faced with such an onerous task, but those who had followed Sarfaraz's career thus far knew that he was the ideal candidate for this job. And they were not wrong.

The summer of 2017 in England saw a Pakistan ODI squad move from being objects of ridicule for their loss to India in the opening game of the Champions Trophy to heroes after they steadily improved their performances to advance through the tournament and win the title by blowing away their arch-rivals at The Oval.

Pakistan's magnificent victory showed that Sarfaraz had the ability to lead and inspire both young and senior members of the team.

Sarfaraz now appeared to be the answer to the prayers of all those supporters of Pakistan cricket who longed for that 'man for all seasons' to take the team towards greater heights.

With frequent success in the shorter formats becoming more of a formality than a shock, attention now turned towards Sarfaraz's leadership abilities in the longer format of the game.

The success of the Champions Trophy had indeed inflated expectations from his side but as many had warned, Test cricket was a different kettle of fish. His captaincy debut in the Test series against Sri Lanka on the innocuous pitches of the UAE proved to be a disaster as Sri Lanka whitewashed the 'home' side by a 2-0 margin.

As Sarfaraz would have undoubtedly learnt from this experience, captaincy in all three formats is a demanding task and success in one does not necessarily translate in unbridled success in other forms of the game.

Now leading a squad of largely inexperienced youngsters, Sarfaraz has a huge task ahead of him in the upcoming series against England. There are already questions being asked of the composition of the squad which he has been involved in selecting. Apart from shepherding his young wards, Sarfaraz also has his own personal form with the gloves and the bat to worry about.

While success in one-dayers and T20Is, a format where Pakistan have attained the number one position in the ICC Rankings is admirable in itself, Pakistan's current number seven ranking is a far-cry from the top position they achieved shortly after the completion of the 2016 Test series against England.

For Sarfaraz, the tour of England represents a chance to redeem himself after the poor showing against Sri Lanka and to showcase his abilities to guide Pakistan to success. He has done it before when he took on his critics head first and also took on some top-quality oppositions to lift the Champions Trophy, but the two-match series against England in the early summer is a challenge as tough as any in international cricket.

To come through the ranks in Karachi cricket you have to have something special about you, such is the competition for places. A battle-hardened cricketer, Sarfaraz's style of play and behaviour is a healthy mix of the gutsy street-fighting qualities of Javed Miandad and the fast-thinking and innovative abilities of Moin Khan.

Add to that, his no-nonsense approach towards his team when their attention is wavering on the field or when they show a lack of urgency and Pakistan has a captain who is the ideal candidate to lead his country in all three formats of the game. The challenges and criticism will always be there for Sarfaraz, but from what he has shown so far in his leadership, he is a man who wears his heart on his sleeve and expects nothing less from his team-mates.