In his latest article for FirstPost, Saj reviews a stunning Pakistani team effort which lead to victory against a fancied England side. 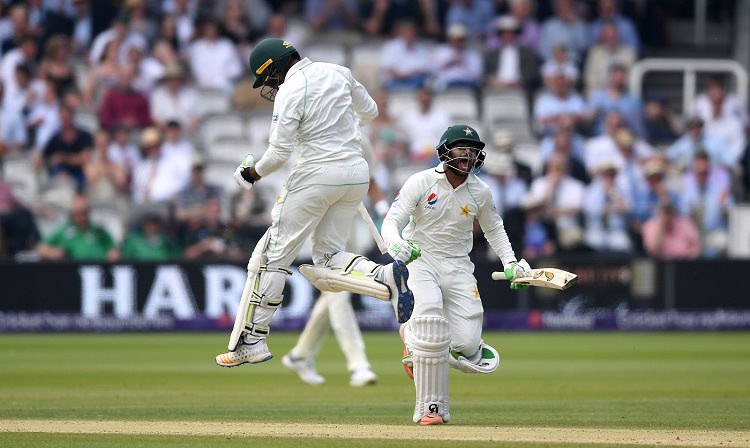 The signs were ominous and the writing clear on the wall. The Pakistan Test squad was, in many eyes, a train wreck waiting to happen in slow motion. Large sections of Pakistan’s very vociferous media and many seasoned supporters were of the considered opinion that the Test series against England would end in nothing but ignominy for a squad that was largely considered inexperienced in the art of playing the long format of the game. A Pakistan squad of such quality was deemed to be unworthy of a quality opposition such as England and genuine concerns were being expressed regarding the commercial viability of such a visit.

Whilst the predictions were dire and uncharitable towards Pakistan, there was good justification behind such pronouncements.

To start with, before the squad stepped onto the shores of United Kingdom, it contained no less than five players who had not played a Test match before. This possibly would not have been that great an issue had the Pakistan Test side not been recovering from the retirements of two of their most trusted servants, Misbah-ul-Haq and Younis Khan. The duo had played a key role in Pakistan’s successful trip to England in 2016 and their absence had already been felt in the 2-0 humiliation in a Test series against Sri Lanka in the UAE in 2017.

The freshly-appointed Test captain, Sarfraz Ahmed’s introduction to the long form of cricket, thus, had been disastrous. Many critics now felt that the trip to England would only re-affirm the mediocrity that was seen to be creeping into the Pakistan Test setup after the heady days of their promotion to the number one Test side in ICC rankings in 2016.

For the team to emerge from such negativity would have taken nerves of steel and a resolve that would possibly border on the impossible if anything useful was to be attained from the Test series against England.

The Pakistan Cricket Board (PCB) has had many failings in the past but one aspect of their planning which no one can doubt is the meticulous manner in which they scheduled their preparations for this Test series.

Pakistan arrived earlier in England and played two four-day games under different conditions before playing the historic one-off Test against Ireland. The trip to Ireland was not easy and Pakistan won after a tough fight. However, contrary to popular opinion, the team of mostly youngsters who had previously had great success in the shorter formats of the game had used the warm-up games and the Test against Ireland as sound training platform to hone their skills; the results of this baptism by fire were to soon become apparent to an unsuspecting England side at Lord’s.

Buoyed by their home record and bemused by the quality of opposition, an England side playing in early summer at the Home of Cricket took on a Pakistan team which really had a few well-known names from the previous tour in 2016.

The result to many was a foregone conclusion and a Test lasting not more than three days with plenty of entertainment for the home fans was what was promised and expected as eager crowds came to watch the first game of the summer.

To their immense surprise and shock, what they found was a Pakistan side that was more than capable of holding its own. The re-education of the critics of the visiting side started on Day 1 when Pakistan bowlers took on the much-vaunted England batting unit with gusto and textbook discipline. It now became clear to all that this was no ordinary side but one that believed in its abilities and had the wherewithal to use those talents.

Mohammad Abbas and Hasan Ali, two names that the ordinary England fan would have paid scant attention to in the build-up of the series, became tormentors-in-chief for the home side as they shared four wickets each to dismantle England for a below-par 184. There had been murmurs of discontent regarding the form and efficacy of Pakistan’s leading fast-bowler, Mohammad Amir. But, in a matter of few overs in the first innings and more so in the second innings, Amir took the wind out of the England sails.

Pakistan's batting, which had earlier been the subject of constant amusement due to its frailty, also delivered a lesson in the virtues of patience and diligence as expected from any top-level Test side to all but shut the door on a bewildered opposition.

From the more established batsmen like Azhar Ali, Haris Sohail, Asad Shafiq to Pakistan’s younger guns in the shape of Shadab Khan and Faheem Ashraf, each player played as if they valued their wicket more than their lives to give their side the best chance of victory.

And it wasn’t just the basics of bowling and batting but the fielding where Pakistan took some excellent catches and saved runs also showed the newfound resolve in this young and energetic team for which the chief selector Inzamam-ul-Haq had widely been criticised for choosing for a series of this importance.

Sarfraz Ahmed had copped a lot of flak from many quarters for his brand of captaincy as well as his own form but the Pakistan captain set the tone for his side with some exceptional captaincy and brilliant wicket-keeping which is exactly what the team needed to perform at its best.

Pakistan harried, out-fought, out-skilled, shocked, surprised and outplayed England. Pakistan showed far more professionalism and discipline than the much-fancied home team; words that epitomise the philosophy of Mickey Arthur. Pakistan, who were given no chance by many and perhaps by some of the England players, were remarkably the better team in every department at Lord's and their victory was thoroughly deserved and savoured by the players. The young guns fired, the older heads steadied the ship, the think-tank got the preparation and the combination right; it was perfection.

And so the action now moves to Headingley where a shell-shocked England side will hope to regroup and shed the cobwebs to try and retake the high-ground which will serve as an important morale boost ahead of further challenges this summer. For Sarfraz Ahmed and his jubilant squad, from being ridiculed as a team with no chance to becoming series favourites would have been a great experience. What lies ahead in the final match of the series is a supreme test of Pakistan's resolve and temperament, but as they showed at Lord's, it is a test they are more than capable of passing.