The day I kept wicket for Pakistan

Adeel Shafique, an aspiring young cricketer from Nottingham described how this unique opportunity to don the wicket-keeping gloves for the Pakistan side in the warm-up match against Leicestershire came about. 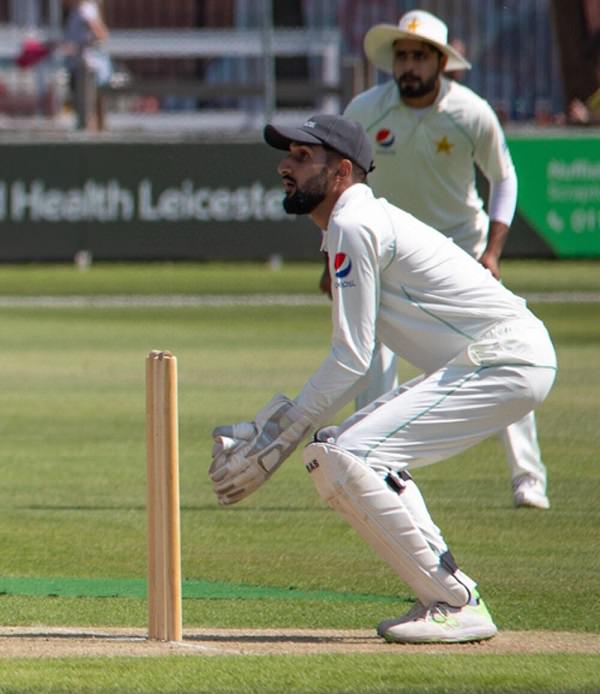 To play international cricket is every aspiring cricketer’s dream and requires years of training and hard graft as the individual makes his way through the system starting from club cricket to the County level as is the case for England based players. Only a small minority of thousands who play the game in the country make it anywhere near to a point where they are able to rub shoulders with the top players of the game. The often arduous route to the top is usually littered with a few disappointments so imagine the shock of 23-year-old wicket-keeper Adeel Shafique when he was, out of the blue, asked to be part of the touring Pakistan Test squad for their warm-up game recently against Leicestershire.

Speaking exclusively to PakPassion.net, a very pleased Adeel described how this unique opportunity to don the wicket-keeping gloves for the Pakistan side came about.

“I was made aware of the possible opportunity on Friday by my agent Moghees Ahmed through the International Cricketer's Association (ICA), before Pakistan's warm-up match against Leicestershire which began on Saturday. My agent got in touch with me and said there might be an opportunity in the 2-Day game as Pakistan captain Sarfaraz Ahmed wanted to rest during the game. Paul Nixon, the Leicestershire coach, asked my agent if he had anyone in mind and after a few meetings between the relevant officials, I was told to be there for the start of the game on Saturday morning.”

A once in a lifetime opportunity and possibly a dream come true is the only way to describe this. One can only imagine what would have been going through Adeel's mind once he was made aware of the chance of playing alongside some of Pakistan's top Test players. To say that he was excited would be an understatement as he explained, "it was a little bit surreal to be honest to start with, but once it was all confirmed, I was buzzing with excitement. I thought this would be a great opportunity to showcase what I can do as well as you never know who is watching. So, all in all, it was an exciting time for me and I felt very privileged to be asked for this assignment."

The Leicestershire game was the final chance for Pakistan's players to organize themselves ahead of the all-important Lord's Test and it was important that the visitors got their preparations in order which is why Adeel's help was needed as that allowed captain Sarfaraz Ahmed a break from wicket-keeping duties.

"I arrived there on Saturday morning and spoken with Mickey Arthur and captain Sarfaraz Ahmed. They told me that the plan of action was that on Sunday, Sarfaraz would keep for 35-40 overs or so and I would take over for the rest of the day. I did the warm-ups with the team to get a feel of how each bowler was bowling and got a fair idea of where to stand for them."

With all the arrangements in place and the initial excitement out of the way, it was now up to Adeel to show up and take the field for Pakistan and showcase his skills, but playing alongside an international side for the first time in his life had its own particular challenges as he explained, "I was very nervous which is quite natural in this sort of situation. But, at the same time I was quite excited too. My family also came over to watch the game and they were very happy as well, which made it even more special for me. I was also lucky that in the second ball of Shadab Khan’s first over, I got the ball nicely in my gloves and whipped off the bails, so that gave me confidence and settled my nerves and I was fine after that."

Many international batsmen have found Shadab Khan a tough customer to handle as Mark Stoneman and Ben Stokes found to their discomfort in the 1st Test at Lord's. Whilst batsmen have their difficulties facing Shadab, it stands to reason that 'keeping against the young leg-spinner would also be challenging but surprisingly, Adeel seemed to take on the job with gusto and confidence.

"Yes, Shadab Khan has a very good leg-spinning delivery and a wrong ‘un as well but I feel I picked him absolutely fine. He bowled really well in the match and it was a great experience to ‘keep to the bowling of an international level spinner and also see all his variations. I was taking all his deliveries with ease and I felt that his bowling was pretty easy to pick."

To be asked to walk into an international dressing room of any team as a relative stranger would be a huge task as it is, but to try and gel with an international squad must require a lot of guts, but Adeel found a very friendly Pakistan team and their management who helped him settle in as he explained, "the Pakistan players were very welcoming to me. When I got there on Saturday, they all introduced themselves to me and also Mickey Arthur was great as he introduced me straight away which was nice of him. For me, it was particularly interesting to see how the players and coaching staff went about their work. All the players told me to relax and enjoy myself. Initially, I sat alone in the changing room but they encouraged me to join them which was very nice of them."

There aren't too many cricketers around the world who can claim to have been called-up to play for an international side without prior experience so it would be fair to assume that Adeel took away some lasting memories from his experience with the Pakistan side which included a stumping off the bowling of Fakhar Zaman.

"Towards the end of the day, I got a stumping which was very memorable. Fakhar Zaman was bowling and to get that stumping is something I will remember for a long time. Whilst this was something which will stay with me for some time. But, what really made it worthwhile was when at the end of the day, I returned my Pakistan kit whites to one of the players and they told me it was for me to keep as a memento which was really nice of them and I was really appreciative of that."

The future for a talented young cricketer like Adeel Shafique could well include an opportunity to play cricket at the highest level but for now, as he explained, his family and he are still coming to terms with possibly a once in a lifetime experience.

"I feel very lucky as Pakistan could have easily picked anyone else for this game instead of me. I am a young player of Pakistani descent and my father is Pakistan-born and for him this was a great moment. As one can imagine, this is not a regular occurrence, almost random, but it is something I will not forget for a very long time. Looking back to the time I found out about this assignment, my family were completely shocked when they heard I would be playing for Pakistan. I rang my brother and he had the same reaction as did my father who is a massive cricket fan. About 15 of my family, including my cousins and my Dad and his friends, came over to see the game on Sunday when I was ‘keeping. Even for them, this will be something they will remember for a while."

Whilst Adeel's current claim to fame may be a stint with the Pakistan Test squad, the fact is that it were his skills as an up and coming wicket-keeper which were behind him being chosen for this assignment. A product of the English cricket system, Adeel has had an impressive career so far as he described.

"I came through the Nottinghamshire County cricket system and went through the cricket academy there and took part in my first First-Class match when I was at Notts when I was 16. I was then released from Notts in 2013 and wasn’t sure what to do after that but then I was picked by MCC Young Cricketers which I have been part of for the last 3 or so years. This has been absolutely amazing for me and this team is a springboard for anyone who wants to get out there and impress some County teams. Because we play against County teams, if one does well in matches against them then the County may ask the players that impress them to play for them in the future. I was sent to Hong Kong last winter by the MCC and only got back in March after playing in the Hong Kong T20 Blitz. There I was part of a team which had some players like Wahab Riaz, Dwayne Smith, Samit Patel as well as Ashar Zaidi, with the tournament having some big names like Darren Sammy and Kumar Sangakkara as well.

With the excitement of playing alongside some of the best players from Pakistan behind him, Adeel is now hoping that the game at Leicestershire will act as a catalyst to move his career forward and could prove very beneficial in the future. "The MCC Young Cricketers team has been great for me as I have captained them as well. I am still 23 and my coach Steve Kirby is looking to get me a County spell maybe in a second eleven if possible but failing which I have an option of going back to Hong Kong as well. I am convinced that the Pakistan game for me was a great chance of exposure to people who do take notice of such things. If people can see that I am able to ‘keep for international sides then that will hold me in good stead for the future," he concluded.