"Hope that a time will come when my hard-work will be rewarded" : Mansoor Amjad

The all-rounder spoke about his progress at Rishton CC in the Lancashire League, looked back at his career so far and reiterated his intentions to represent Pakistan in the future if given proper opportunities to do so. 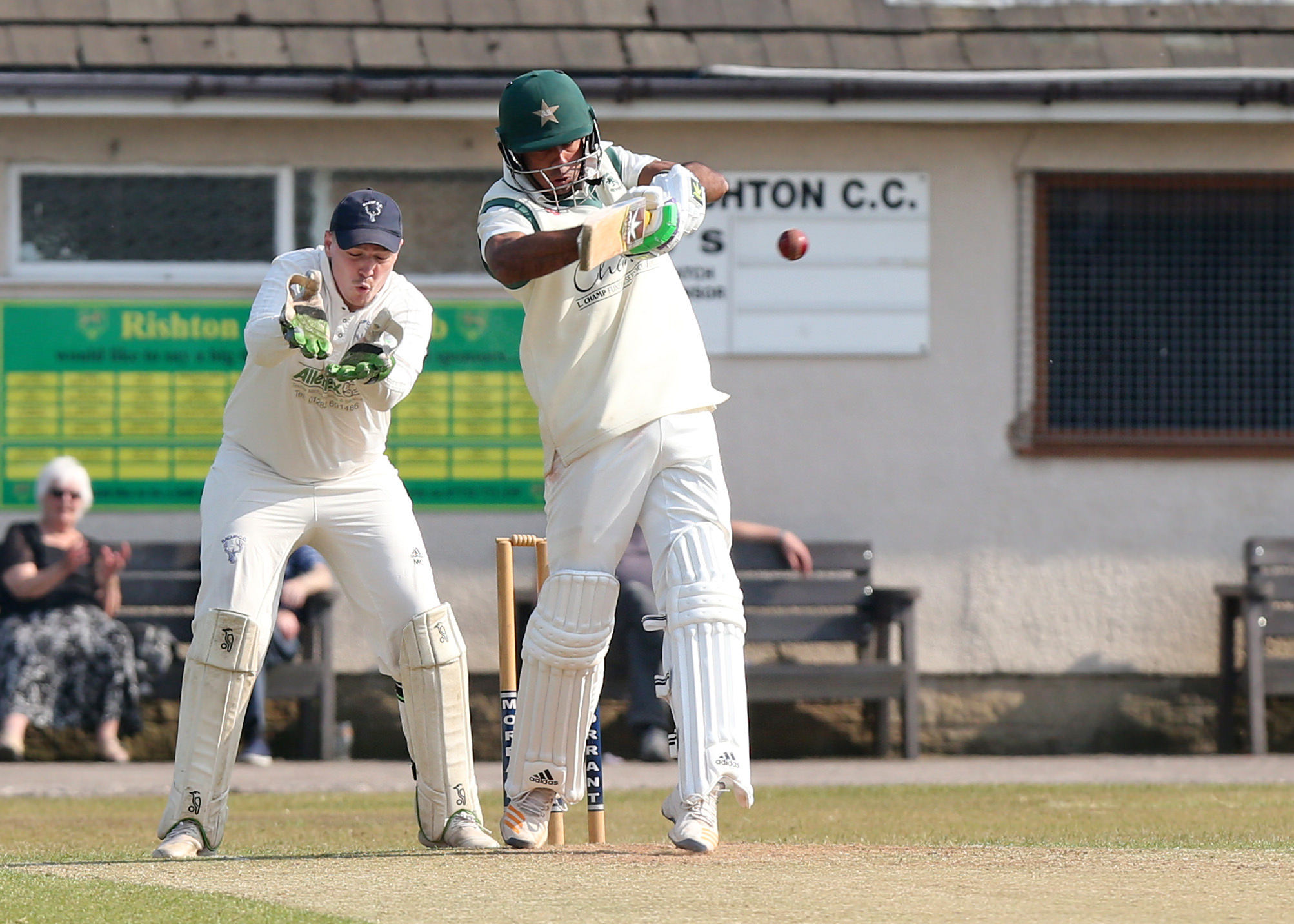 The history of Pakistan cricket is replete with talented young players who have walked into the national team from the cold and shocked observers with skills which are the envy of other nations.

One such individual, Mansoor Amjad, did the same back in April 2008 when he calmly bowled one over in his debut T20I game against Bangladesh, picking up 3 wickets for 3 runs.

The world seemingly at his feet, Mansoor was to incredibly play just one more international game for Pakistan in the same year before being discarded which even by Pakistani standards, is unfathomable to say the least.

Currently in England where he is representing Rishton Cricket Club, in the Lancashire League, Mansoor Amjad in an interview with PakPassion.net spoke about his progress at the club and looked back at his career so far, and reiterated his intentions to represent Pakistan in the future if given proper opportunities to do so.

Rishton Cricket Club has a rich history of hosting international talent and someone like Mansoor Amjad feels very fortunate to be a part of a club which has featured some illustrious names of world cricket as he explained, “I am very fortunate to be representing Rishton which has seen the likes of Jason Gillespie, Allan Donald, Michael Holding and Viv Richards play for them in the past. So far, my experience with this club has been very enjoyable as we are at the half-way mark in the season and I already have close to 650 runs to my name.”

The Mansoor Amjad story may sound familiar in terms of a talent that had so much to offer but seems to have been wasted due to the vagaries of Pakistan cricket’s archaic system of selection which doesn’t always take talent into account when looking for players to represent the country. In Mansoor’s case, not only has he had to contend with inexplicable reasons for his exclusion but had to deal with what would have been a career threatening injury.

“I began my career as an off-spinner batsman but one of the local coaches taught me to bowl leg-spin as he thought that I would have a better chance to play for Pakistan by bowling leggies. However, I had an injury in my third finger which was also my spinning finger where the ligaments had separated. I was advised by the doctors to have surgery, but no one could promise 100% recovery which was worrying. I was then advised to not have surgery as things could have got worse for me. So, for a few domestic seasons, I stopped bowling completely in the hope that treatment would fix the problem but to no avail.”

What appeared to be a crisis for his career to many others appeared to be another opportunity to a fighter like Mansoor who immediately set about making changes to his bowling style to deal with the new circumstances that fate had inflicted on him, with some remarkable success.

“All I will say is that this injury has been a real source of irritation for me in the past 4-5 years to the extent that I had to abandon bowling leg-spin and start bowling off-spin in domestic cricket. The injury was in my right-hand which didn’t hamper my batting but luckily since I knew how to bowl off-spin, I was able to switch to a different style of bowling. Thanks to The Almighty that even with a change to bowling off-spin, in the last 2 departmental One-Day Cup tournaments, I have taken a total of 23 wickets and scored almost 400 runs whilst often batting in the lower order. Those who have seen me bowl have appreciated the fact that I don’t bowl or grip the ball like an ordinary off-spinner which in a sense helped me in switching between leg-spin and off-spin.”

Many others in Amjad’s position would have used the injury as an excuse to give up or a way of eliciting sympathy but as he explained, his mental strength as well as a good understanding of cricket was the main reason for his remarkable change of bowling styles which helped rescue his career, “to me this is a case of being mentally strong and having the ability to take on any challenge that life throws at you. In the case of switching bowling styles, the major issue is to know what field to set for your bowling and also the big difference is that leg-spin is an attacking style of bowling and requires that sort of a mindset. That is not the case when one bowls off-spin where the chances of being hit for runs is a little higher if you try and go for an outright attack, so you need to be a little patient when bowling off-spin. Thankfully, I understood all these elements of a spin-bowler’s game and was not only able to adapt to switching from leg to off spin but was also able to produce excellent results as well.”

Whilst one can appreciate Mansoor Amjad’s dogged determination to improve himself to stay in contention for a spot in the national side, there is also little doubt that there is stiff competition for the spin-bowler’s spot in the Pakistan team. The abundance of young talent as witnessed in recent times could well prove to be a hurdle for any player wishing to make a return but Amjad feels that he has something more to offer to the existing healthy spin options that are available to the selectors.

“There is no doubt that currently Pakistan cricket has been blessed with a strong contingent of leg-spinners such as Yasir Shah, Shadab Khan, Mohammad Irfan, Usama Mir and a few others as well. But, there is a definite lack of off-spinners in the Pakistan side which is a role I believe I can fill. This does puzzle me a bit as I do not understand why I am not picked to fill that gap in the national team. If the criteria, as we are told, for selection is a sound showing at the domestic level then surely, I should have nothing to worry about. All one has to do is to look at my domestic record for the past few seasons in One-Day tournaments and it will be clear why I should have been selected. I am sure my fellow teammates at WAPDA like Kamran Akmal and Salman Butt can easily confirm how good my performances have been in these tournaments.”

Not being selected for national duties despite good domestic performances seems to be a familiar complaint from many players in Pakistan cricket but Mansoor Amjad’s case is particularly compelling given the amazing start to his career as he explained, “the curious thing is that the selectors saw my performances in domestic cricket and appreciated them as well, but when it came to the selection of the Pakistan side, I was overlooked for reasons which I do not understand. Initially it was said that lack of fitness was the reason I was discarded from the Pakistan side playing one T20I where I took 3 wickets in one over and an ODI after that where I performed well, but the fact is that my injury came much later after that. From the time of my availability for Pakistan, there were about 25 home and away tours for which I was not considered for the series or the side games. I find that strange as PCB invested time and money in my development initially but have for whatever reason not utilised my services.”

Unable to find a place in the national team, Mansoor Amjad’s options to showcase his skills are limited but the advent of the Pakistan Super League could have provided a great opportunity for the Sialkot-born all-rounder. However, as he described, even getting his name listed for selection in the PSL required some special effort as he earlier learnt from his experience in the National T20 tournament.

“Not long ago, I was told by two sides in the National T20 tournament that they were interested in taking me on for their teams but when the day arrived for the draft, I was called up by the teams to say that my name was missing from the list. I could not believe it as I had played a T20 tournament the year before where I was the second most economical bowler in that tournament after bowling as an off-spinner. Incredibly, when I asked the authorities why I was not in the list of draft picks, I was told that they had forgotten to add my name to the list. To make things worse, they suggested that for next time, it is I who should call them ahead of time to remind them about adding my name to the draft list. Armed with this knowledge, I reminded the PCB closer to the Pakistan Super League drafts for the 2018 edition and I was magically included in the list of players available for this process which really tells you a lot about the strange manner in which such decisions are made.”

The PSL for three years now has been considered the crown jewel of Pakistan cricket as it has produced a number of match-winners for the national side. But, is this tournament really benefiting Pakistan’s First-Class or domestic performers? The answer in Amjad’s book is a firm no.

“If one looks at the types of players who have played in the PSL up till now, you will find only a handful of the players who have worked hard in 4-day games or performed well in domestic games taking loads of wickets. But, we are being told that the PSL has greatly benefited our domestic cricket. How can this be true when one can clearly see that the players deriving most benefit are the well-set international players or the very young ones? Those who hardly play First-Class cricket, or the newcomers continue to thrive in the PSL, so I really do fail to understand the criteria behind inclusion of players in the PSL.”

With the clock ticking away for his career, 30-year-old Mansoor Amjad knows that time may be running out for him to make a return to the Pakistan side. Cricket is his passion and he is not willing to give up without a fight but all he wishes for is a level playing field to allow him to compete and represent his country, “I started playing domestic cricket when I was 14-years-old. So, people who have been used to seeing me since almost 16 years are shocked to see that I haven’t made that much progress. It is indeed saddening for me that despite some fantastic performances at the domestic level, I am unable to find a place in the national team. Regardless of that, I am still fit and hopeful of making a comeback. I have never given up on my intentions to play for my country and I do hope that a time will come when my hard-work will be rewarded, and my talent will also be recognised,” he concluded.