Currently playing in the North Staffs & South Cheshire Cricket League where he is representing Hem Heath Cricket Club, the Pakistan all-rounder spoke exclusively to PakPassion.net where he discussed his stint in club cricket, his disappointment of missing out in this year’s Pakistan Super League and his aspirations of playing for Pakistan in the 2019 World Cup. 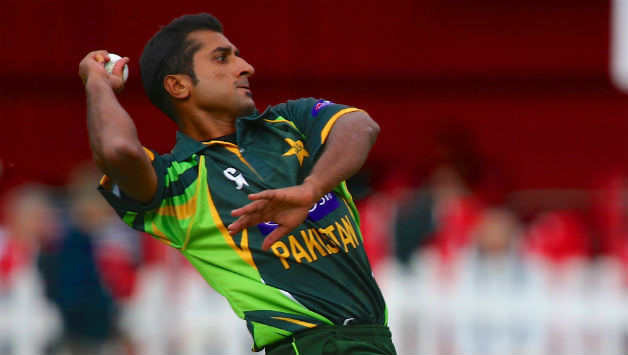 Pakistan cricket’s quest to discover a fast-bowling all-rounder has seen many false dawns over the past few years. A number of promising pretenders to the crown left vacant by the likes of Abdul Razzaq and Azhar Mahmood have stepped forward in the past, only to disappoint due to a lack of good performances or the inability to sustain the sort of form and fitness which is crucial in today’s game.

Bilawal Bhatti arrived on the international scene in 2013 where he played a crucial part in Pakistan’s ODI victory against South Africa; on ODI debut, he took 3 wickets and scored 39 runs and it seemed to be a time of great hope for fans and supporters of Pakistan cricket.

Not only was Bilawal’s debut an impressive one for the connoisseurs of the game but what really raised the hopes of many and made it more important was his role in Pakistan’s historic ODI series victory against a very strong South African side.

Able to touch 90mph with the ball and with an aggressive side to his batting, Bilawal has paradoxically played a total of just 21 international games for Pakistan and last represented his nation in the historic home series against Zimbabwe in 2015, but has since been unable to find a place in the national side.

Currently playing in the North Staffs & South Cheshire Cricket League where he is representing Hem Heath Cricket Club, the Pakistan all-rounder spoke exclusively to PakPassion.net where he discussed his stint in club cricket, his disappointment of missing out in this year’s Pakistan Super League and his aspirations of playing for Pakistan in the 2019 World Cup.

With the seasonal break in domestic cricket back home, Bilawal, like many other Pakistani cricketers has travelled to the UK to play league cricket where he hopes to gain valuable experience in foreign conditions and as he described it, the experience has been very beneficial for him.

“I was injured just before the PSL this year which was a big setback for me. It really saddened me as well and it took me a good 2-3 months of rehabilitation to recover from the shoulder injury. After recovery, I came over to England to play for Hem Heath Cricket Club. In terms of fitness, I am completely fit although I had to struggle a bit when I came over to the club initially as I wasn’t able to bowl but could only contribute with the bat. But thankfully I am back to full strength and run-up in the past few weeks and am wholeheartedly taking part in the league as a bowler and batsman.”

Injuries are part and parcel of any sportsman’s life and Bilawal has had a few to contend with during his career. The particular shoulder injury which kept him away from PSL’s 3rd edition did not happen overnight and was possibly due to the amount of cricket he played during the previous domestic season as he explained, “my shoulder had been hurting throughout the domestic season, but it still wasn’t that serious a problem. I also had some hamstring issues during that period, but I wouldn’t class them as anything major as I was able to recover after resting for one match. I suppose, carrying a shoulder injury for the season did take its toll and bowling long spells did not help my situation either. When it came to the PSL, I was taking part in my team Lahore Qalandar’s training camp and during one of the practice sessions, I felt a lot of pain in my shoulder whilst throwing the ball. An MRI scan later confirmed that I had an injury in my shoulder which sadly ended my participation in the PSL in 2018.”

There is little doubt that the advent of the PSL seems to have injected a new dose of enthusiasm as Pakistan cricket continues to struggle due to the absence of regular international tours to the country. Providing a platform to showcase skills for Pakistan cricketers as well as giving them a chance to rub shoulders with some of Twenty20 cricket’s finest players were some of the benefits of the PSL. As is the potential for being picked for the Pakistan side as has been demonstrated by the international success of the likes of Hasan Ali and Shadab Khan. To miss an opportunity to be part of the PSL after being picked for Lahore Qalandars is something that hit Bilawal Bhatti hard.

“As is natural for any cricketer in my position, it was hugely disappointing when all plans and hopes of playing in a top-quality tournament like the PSL were cut short due to an injury. A lot of effort and training had gone into my preparation for the PSL which is why it hurt even more. I suppose this feeling is true for any professional and for me, it was tough to even watch any games of the PSL as I wondered about what I could have achieved if I had played this year. I felt rather envious of the other guys who were playing in the PSL whilst I was sitting on the sidelines nursing an injury. Playing the PSL had been my goal for a while and I had worked very hard to get to a position where I was picked by Lahore Qalandars. This tournament is one which is followed by fans the world over and a good showing in it could have easily helped me in making a comeback in the future. So, it was a difficult time for me, but I accept that such challenges do come in one’s life. Thankfully, I have worked hard to get myself back in shape and will continue to work hard to get to an ever better level of fitness than I have ever had.”

With Pakistan cricket’s recent upward trajectory headlined by successes at the Champions Trophy and the attainment of the number one position in T20I rankings, it would appear that the Pakistan side has all the ingredients it needs for future success. So does Bilawal feel he has a chance to make a comeback and displace some very talented performers in the current side?

“I am really pleased to see that the Pakistan side is doing well in all formats. We won the Champions Trophy last year and currently hold the number one position in the T20I rankings as well. In such a situation, to replace any player in the team will be a very tough challenge but I am not giving up hope. What I am working on is to improve my fitness to such a high level such that when the domestic season starts in September, I will have no problems in performing to a high standard. If I am physically fit, then I will be able to fulfil my goal of being the best bowler in the season and should be able to prove to everyone that I am ready for a comeback to the national side.”

With 21 international games to his name and some fine performances etched in his memory, Bilawal Bhatti is well aware of what is needed of him to make a comeback. Age is on his side and with the benefit of having seen through some hard times, he is now ready for the challenges ahead.

“I am still young at 26 years old and I have great belief in my own abilities. I have seen some bad times and experienced lows in my career but all that is now in the past. I am now looking forward to putting in good performances so that I can make a comeback to the Pakistan team.”

The next major event in world cricket’s calendar is none other than the 50-over ICC World Cup which will be played in England in 2019. Like many other cricketers in his position, a chance to represent his nation at one of the ICC’s mega events is something that Bilawal would love to have which given his talent and determination could well become a reality, “my focus is on playing in the 2019 World Cup. I feel that currently being in England is the ideal place for me to work towards that goal as the weather is ideal and on top of that I have access to some excellent training facilities at Hem Heath Cricket Club. With participation in the World Cup as my aim, I hope to go back to Pakistan and take part in the domestic season and intend to put in such good performances which will make it easy for me to be selected for the national side in the near future,” he concluded.