Former captain showered praise on the Pakistan team for their recent performances in Ireland, England and Zimbabwe and discussed India's tour of England, saying that Virat Kohli will break more records in future. 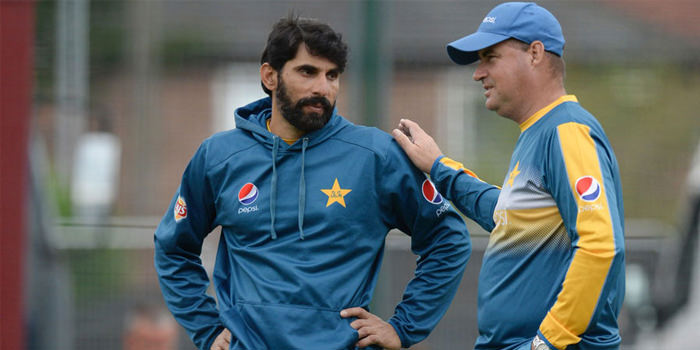 The final moments of Pakistan’s last Test of the 2017 tour of the West Indies will be etched in many minds as they marked the last time the two stalwarts of Pakistan cricket, Misbah-ul-Haq and Younis Khan were seen in an international match for Pakistan.

It was largely felt that Pakistan would struggle immensely without the services of the two master technicians who had been the backbone of their side’s batting for many years. And for a while, especially after the stinging 2-0 Test series whitewash against Sri Lanka, it appeared that the forecast of tough times ahead especially in Tests could become a reality.

However, the Pakistan Test side’s performance on the tour of Ireland and England seems to be a harbinger of better times ahead. The feel-good factor and the positivity gushing out from the recent performances by Sarfaraz Ahmed’s men across all formats has won great admiration from all quarters, and especially from the former Pakistan captain Misbah-ul-Haq who in an exclusive interview with PakPassion.net showered praise on the new-look Pakistan side.

“Overall our team is doing very well, and I am especially impressed by the way some of the newer guys are performing at the international level. It's also heartening to see that the team is winning more frequently with youngsters like Fakhar Zaman and Babar Azam doing really well. We then have the likes of Imam-ul-Haq who has scored 4 hundreds in just 9 ODI innings which is a great achievement. The bowlers, for their part, are also doing well and here I would give a special mention to Shadab Khan, Hasan Ali and Usman Khan Shinwari – each of whom has been exceptional in their roles. All of these factors point to good times ahead for Pakistan cricket.”

Pakistan’s success in the Champions Trophy was one that suddenly made the world of cricket sit up and take notice of a side which in the recent past had promised much but largely failed to deliver. For the former Pakistan captain, the new-found confidence of this young Pakistan team is nothing but a direct benefit of the Pakistan Super League.

“I believe that the rise of the younger players has a lot to do with the PSL. We always knew that countries with their own T20 leagues such as India where the players were getting a great opportunity to play alongside top players, were doing well at the international level. Our guys, on the contrary, were not getting that sort of exposure in high-pressure conditions. On top of that, the gap between normal domestic cricket and the international level was too huge and that problem needed to be addressed properly. Thankfully, with 3 years of the PSL tournament now under our belts, we can see the difference in the way the Pakistani youngsters are performing in a confident manner and adapting so well at the international level.”

There is little doubt about the fact that any side which possesses talented players such as Shadab Khan or Faheem Ashraf has the right to feel confident for its future and in the experienced eyes of Misbah-ul-Haq, it is simply the exuberance of youth which is making a huge difference to Pakistan’s fortunes in international cricket.

“In today’s cricket you need the sort of energy that youngsters like Shadab Khan and Faheem Ashraf bring to the table. They also have a fearless attitude about them and they take on the opposition as if there was no pressure on them, and they enjoy the game which is another crucial factor in their excellent performances at the international level. I strongly feel that the morale as well as the body language of the team has been lifted due to the presence of these young players and hopefully this will continue to be the case in the future.”

Pakistan’s recent tour of Zimbabwe was a satisfactory one for the manner in which the side executed their game-plans in a ruthless manner, disposing of Australia and Zimbabwe in the T20I tri-series and then going on to decimate the hosts in the ODI series. Along the way, Pakistan’s new crop of players showed exactly why they are regarded so highly in international cricket. To those including Misbah-ul-Haq who saw Fakhar Zaman’s brilliance during this series, it was clear that the left-hander brings something special to the Pakistan team, perhaps something they have not had since the days of Saeed Anwar.

“If we go back to 2017, it was Fakhar Zaman’s inclusion in the team and his performances in the Champions Trophy which really made a huge difference after the team was under pressure due to a heavy loss in the first game against India. He was picked for the second game against South Africa and he pretty much changed the whole scenario for Pakistan in that tournament. The whole attitude and body language of the team was different after that game. I do believe that players like Fakhar bring something special to the team as such a player just goes into the team with confidence and expresses himself and plays his natural game, which in turn inspires the whole team to do better as well. This was exactly what was missing from the Pakistan team for quite some time and Fakhar is making a huge difference for the better with his attitude.”

With 333 international appearances to his name where he has scored 11,224 runs for Pakistan, 37-year-old Mohammad Hafeez has been a bed-rock of Pakistan sides for many years. His exclusion from the Pakistan team which played the ODIs in Zimbabwe surprised many, including his previous captain Misbah-ul-Haq.

“This must be a very disappointing time for an experienced and senior player like Mohammad Hafeez as he was not included in any game during the ODI series against Zimbabwe, despite having played some memorable knocks in the past for Pakistan including the one in the Champions Trophy final as well as a few others on the tour of New Zealand. But after that he has failed to become a regular in the Pakistan ODI and T20I squads. I suppose now, it’s up to the Head Coach, Captain and management to decide how they wish to use him in the future as this is clearly a difficult time for Mohammad Hafeez.”

Whilst the Head Coach Mickey Arthur has faced criticism from some quarters during his tenure with the Pakistan side, there is a no denying the fact that he has also brought a new sense of professionalism to a side not readily known for this quality in the past. Results such as the Champions Trophy win as well as Pakistan’s excellent standings in the ICC rankings in the shorter formats have also won him plaudits for his handling of the team and to Misbah-ul-Haq, no praise is good enough for what Mickey Arthur has achieved for the side as he explained, “I think Mickey Arthur has done an excellent job in creating a side with so many youngsters settling in well into a team where there is a great emphasis on a culture of discipline and where fitness is an important factor as well. Along the way, he has had to take some hard decisions and looking at the recent results, they are all paying off for the benefit of Pakistan cricket.”

With England and India now involved in an enthralling battle for supremacy in the ongoing 5-match Test series, the performance of one of the world’s top batsmen Virat Kohli will be watched as a matter of great interest. To a batsman like Misbah-ul-Haq who was once considered the pillar of stability for his side, there is little doubt about what Virat Kohli brings to his side and to international cricket as a whole.

“I feel that Virat Kohli is a wonderful player and I do not think that there is anyone who can argue with that. He performs equally well in all three formats of the game and his batting talent is complemented by his attitude and approach to the game which is second to none. He seems to enjoy his game and is a top batsman at the international level who has already achieved so much but rest assured, he will break some more records in the future too.”

Whilst Virat Kohli’s success on the field appears to be intertwined with his team’s fortunes, it would also be fair to say that India do possess enough talent which England may find difficult to counter in the ongoing Test series. The likes of James Anderson and Stuart Broad may well be big names in cricket, but the fact is that they will be facing a much younger Indian side during this series. To Misbah-ul-Haq, however, it's more about the current form of the sides rather than age that will have a bigger say in the final outcome of this Test series.

“I believe that more than the comparative ages of the players in both teams, the result of the Test series will be dependent upon the form of both sides. In that sense, India has been in good form in recent times if we consider the way they recently played against South Africa and the form of their players in other formats of the game. The Indian batsmen are looking in good touch and they have the confidence as they know that their team has the services of some excellent seamers in their bowling line-up with the likes of Mohammad Shami and Umesh Yadav who are likely to enjoy the swinging and seaming conditions in England. They also have an excellent all-rounder in the shape of Hardik Pandya so they have a good balance in the team which will give them a good chance of victory in this series.”

Whilst England may well enjoy superiority due to playing on their home-turf, it is also true that ICC’s top-ranked Test team visiting the shores of the United Kingdom is quite easily capable of holding their own and springing a few surprises on the hosts. To Misbah-ul-Haq who lead his team on the tour of England in 2016, India’s recent results and their talent are perfect recipes for a victorious tour of England, “I think it will be good competition between two excellent sides. In India’s case, if one looks at the way they played against South Africa in the Test series, it is clear that this is not the same sort of weak Indian team which has visited England in the past. Whilst England may have home advantage, we know that some of their top batsmen have been struggling which makes me think that India have a very good chance to win this series,” he concluded.