"Shadab Khan is going to prove to be a huge challenge for batsmen in the coming years" : Imran Tahir

The 39-year-old leg-spinner spoke about his stint for Durham in the 2018 edition of the T20 Blast and discussed what keeps him going, day in and day out. 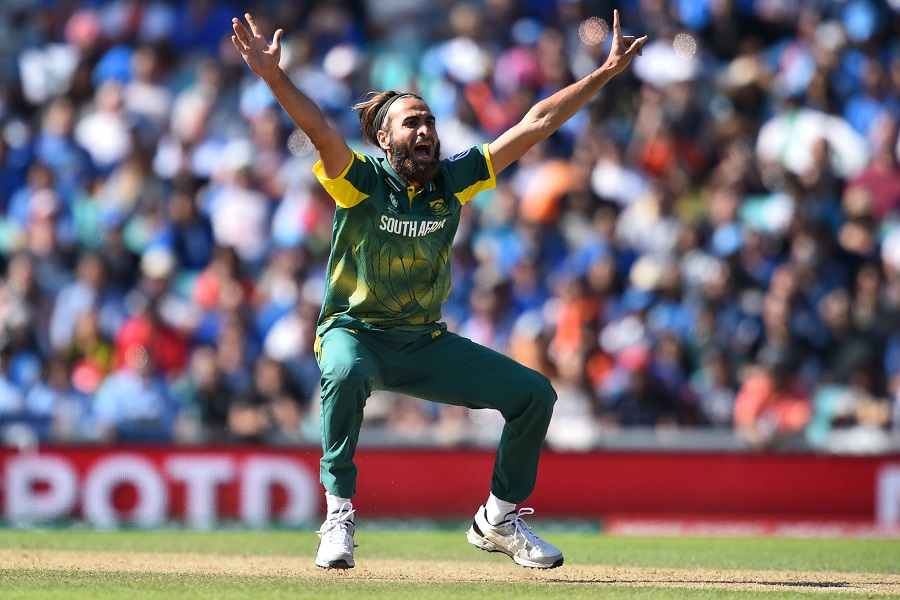 A crowd favourite whether he is representing South Africa or when he is playing in the Indian Premier League, County Cricket or the Pakistan Super League, Lahore-born Imran Tahir never fails to impress with his enthusiasm and desire to succeed for his team.

The 39-year-old leg-spinner, who has taken 253 international wickets is currently playing in the Vitality Blast Twenty20 tournament for Durham which he seems to be enjoying immensely as he explained, “I always enjoy playing in County Cricket and challenging myself in English conditions. Each spell in County Cricket presents different challenges and it's always a very enjoyable and interesting experience. I'm grateful to Durham that they gave me the opportunity to come over to England and play 9 games for them this season. I've really enjoyed my stint for Durham and it always helps when you as an individual are doing well and taking wickets and the team is performing well and winning matches.”

Playing international cricket and league cricket with the same vigour, day in and day out is an art-form that Imran Tahir seems to have mastered which he puts down to his continued passion for the game.

“The motivation never diminishes however many teams you play for around the world. Nobody is going to make sure you are motivated, you have to do that yourself and it has to come from within. If you don't have that passion and desire to succeed and play cricket, then there is no point playing the game. I strongly believe that whatever job you do in life, do it sincerely.”

The unbridled pleasure that Imran Tahir derives from every wicket he takes can be measured by the intensity of his celebrations and it is something even he finds hard to explain.

“I'm not really sure what goes through my mind when I take a wicket, I sort of lose control. I think it's the relief and the passion coming out every time I take a wicket as I have waited all my life to get the chance to play at the highest level of cricket and finally I got there, so I just want to enjoy and savour every wicket. I also feel that every wicket is important and special to me, whether it's club cricket or international cricket and it's probably that passion coming out from within when I pick up a wicket.”

The 2019 World Cup is looming large in the eyes of many cricketers around the world and Imran Tahir has high hopes for his team South Africa who have an unenviable reputation for being the perennial under-performers in such tournaments.

“I'm looking at next year's World Cup as a tournament that South Africa can do well in. We have a good team and have a great bunch of guys who will fight to the end and never give up. I can't predict that we will win the World Cup but I'm pretty sure we can get through to the semi-finals and then anything is possible.”

In recent times, South African sides have suffered due to the retirement of Morne Morkel and the unavailability due to injury of Dale Steyn which will become a permanent situation after the World Cup in 2019 in white ball cricket. Imran Tahir’s words of gratitude are indicative of how the nation feels regarding both South African stars.

“Just like Jacques Kallis, you simply cannot replace Morne Morkel and Dale Steyn who have been great servants of South African cricket. I salute such great performers and I hope that as a team South Africa can give Dale Steyn a great send-off from white ball cricket next year at the World Cup.”

Shadab Khan’s rise as a formidable leg-spin option in international cricket has not gone unnoticed by Imran Tahir who praised the 19-year-old bowler for his special all-round talent and sees a special future for the teenager.

“Leg-spin bowling seems to be gaining strength in international cricket and I believe that Shadab Khan is not only a great bowler, but a fantastic all-rounder. He's a special and very talented cricketer and he has shown all over the world wherever he has played that he is already a world-class talent. He will only get better with experience and he is going to prove to be a huge challenge for batsmen all around the globe in the coming years.”

Adil Rashid’s selection for England’s Test squad for the series against India seems to have caused no end of controversy, especially since the spin-bowler had given up red-ball cricket for his County, Yorkshire. In Imran Tahir’s mind though, there is little doubt about Adil Rashid’s abilities and concerns on his suitability for Tests are totally unfounded and based on misconception.

“If your country calls you up for Test duties, you are obviously not going to say no. If Adil said no to red-ball cricket for his County, but his country asked him to play Test cricket then of course he will say yes to England. Playing for your country is a matter of great pride and I believe that Adil Rashid is well within his rights to play Test cricket for his country again. He's a fantastic cricketer and I think in the last 3 or 4 years he has been England's most successful bowler. I wish him all the best and I hope he does really well in the upcoming series against India.”

The England-India Test series is a mouth-watering prospect for the connoisseurs of the game where some of the world's best batsmen such as Joe Root and Virat Kohli will be showcasing their skills under immense pressure but what does it actually take to bowl to and dismiss such top-class batsmen? Imran Tahir has the answers.

“When you are bowling to the likes of Joe Root and Virat Kohli, as a bowler you have to stay calm and wait for them to make mistakes. It's very difficult obviously to bowl to such great and consistent batsmen but you have to be ready and up for the battle and playing against the best does bring the best out of you as a bowler. You also have to enjoy the occasion and aim for the big achievement of dismissing top-quality batsmen like Root and Kohli. If I was bowling to either of them in this series I would go into the series with a big heart and not be afraid to go for my variations and wait for them to make a mistake.”

Whilst England go into the 5-match Test series with an edge due to their immense home advantage, it would be foolhardy to declare any one side as absolute favourites. The quality of bowling and batting power that both sides possess is likely to make this a series to remember and one that Imran Tahir will relish and watch with great interest, “I'm very excited about the England versus India Test series, it should be a great battle and the fans will see some hard-fought and excellent cricket. I wish both teams well and I hope both teams play the series in the right manner and in a way that is good for the game. May the best team win,” he concluded.