"My passion to represent Pakistan has only grown and become stronger" : Wahab Riaz

A sought-after player for T20 leagues around the world, Wahab Riaz preferred to play in England ahead of any other location and explained the reasons for his decision. 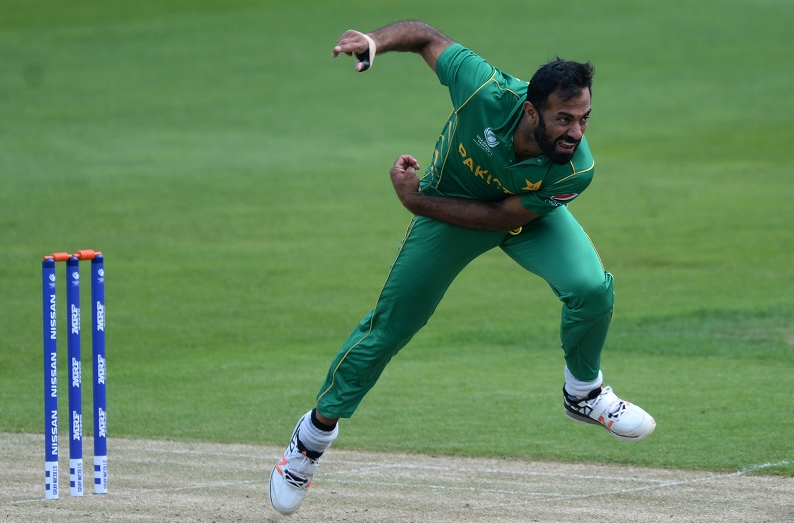 It was the memorable quarter-final against Australia in the 2015 World Cup where Wahab Riaz’s ability to bowl fast and with aggression truly came to the fore in the eyes of cricket fans around the world. His iconic bowling spell in that game, which Australia eventually won by 6 wickets, to a somewhat bewildered Shane Watson made Wahab an instant hero in the eyes of his countrymen but paradoxically placed a tough burden on the pacer for the rest of his career. It was perhaps this pressure that seemed to take a toll on him resulting in some insipid performances, which has probably lead to him being sidelined from the national side.

Wahab recently ended a 12 match stint with Derbyshire in the ongoing Vitality T20 Blast where he took 15 wickets and scored 152 runs and is now participating in the Caribbean Premier League where he is representing Barbados Tridents. A sought-after player for T20 leagues around the world, Wahab Riaz preferred to play in England ahead of any other location and explained the reasons for his decision.

“When I was reviewing the offer from Derbyshire, I also had an offer from the Global T20 in Canada and had to choose between both competitions. I chose Derbyshire because it was a longer stint and most importantly it would also allow me to familiarise myself once again with English conditions. The objective I set for myself during my stint with Derbyshire was to deliver for the team and play my part in winning every single game that I played for them. I feel that I made good progress during my time with Derbyshire.”

Wahab last played Test cricket for Pakistan in October 2017 and has not featured in any Limited-Overs game for his country since June 2017 which to his critics seems to indicate a lack of consistency in his bowling. This is a charge that the fast-bowler was quick to deny as he explained, “The critics are doing what they do best and painting their version of the picture. But the reality is different especially if one considers my performances in the past 12 months where I have played a Test against Sri Lanka in UAE, PSL and put in some excellent performances during my stint with Derbyshire. Instead of worrying about critics, I am focusing on reducing any extra runs off my bowling, my bowling in death overs, contributing with the bat and most importantly my fitness which is now a requirement for playing in any format of cricket.”

Pakistan’s recent success in Limited-Overs formats including their win in the Champions Trophy have largely been attributed to the single-minded determination of their Head Coach Mickey Arthur. Whilst Arthur has been very positive in his comments about the Pakistan side, eyebrows were raised when he appeared to question Wahab Riaz’s work ethic. The Pakistan bowler was quick to dispel such notions as he remarked, “I’m not sure if he was actually questioning my work ethic. In my opinion, he was merely providing feedback on areas of my game that he feels I can improve on. It is no secret that Mickey has been very firm about having a high-level fitness target for all the boys and I sat down with him before coming over to England. We had a long chat about my fitness and training regime and Mickey provided his feedback on areas I can improve on. Yes, I might have been a bit relaxed about my diet a few days of the week, but I’m still able to maintain good fitness for my game and have never failed a fitness test. But, Mickey felt that I could do better, and I agree with his opinion because as a fast bowler, especially in Test cricket, you cannot survive if you are not 100% fit.”

Wahab Riaz also disagreed with Pakistan Head Coach’s remarks about the fact that he had not won a game for Pakistan in years and re-affirmed his commitment to his goal to do the best he can for his country.

“I know that I have bent my back for my country and gave the best I could, but even I’m not satisfied with some of my performances and I feel I should have done better. As a cricketer you are bound to have good and bad patches, and I won't let any low points affect my career as there is nothing more I want to do in life than winning games for my country and my people. Sometimes, even when I bowl well, my team does not win. Look at my Shane Watson spell in the 2015 World Cup Quarter-Final where Australia won, or my bowling spell in the last Test match against Sri Lanka where we were not successful even when I got an important breakthrough.”

The next big ICC tournament is the 2019 World Cup and understandably, all 10 participants in this mega event are busy making preparations to build the right team combinations to give themselves the best chance of success. For Wahab Riaz, participation in the World Cup would be a great honour but he understands that the road to establishing a place in the Pakistan team ahead of this tournament is a tough one as he explained, “It’s never easy to try and find a permanent place in a strong team like Pakistan which is doing so well at the moment. This is especially true when you are talking about Pakistan’s very effective bowling line-up but I know that I made my debut for Pakistan when our bowling was very strong and it happened due to my hard work. I was able to convince the selection committee then and I believe I can do it again. At the moment, being selected for the 2019 World Cup for Pakistan and performing well is my main, and only, priority at this time. There is also the 2020 World T20 on the horizon but I am firmly focused on playing in the 2019 World Cup at the moment.”

It is natural that Wahab Riaz would have been disappointed at not being picked in the recent series against Zimbabwe, but it was clear from his remarks that regardless of setbacks, playing for Pakistan still remains foremost in his mind.

“It is my only desire as a professional cricketer and as a Pakistani to continue playing for my country. Playing for your country gives one great satisfaction. Moreover, being selected to play for a strong team like Pakistan means that you have to be one of the best fast-bowlers in the world, so it’s a matter of honour and pride to see your name on the Pakistan team list and something I will never give up on. I am 33 but my fitness and ambition has never been stronger. I used to think that the fascination of playing for Pakistan would fade with time. But, if anything, my passion to represent Pakistan has only grown and become stronger than ever before.”

Whilst Wahab Riaz’s enthusiasm to play cricket remains as strong as ever, he is also the first one to accept that modern day cricket is not getting easier for the fast-bowlers, especially in the shorter formats.

“The shorter formats are more favourable towards the batsmen as proven by the spate of constantly increasing high scores in ODIs and T20Is. We now have T20I matches where 400+ runs have been scored in a single match; all that in 3 hours! But, it is what it is. Like batsmen have come up with innovations in their shots, the bowlers must also do the same. Whilst having experience has no substitute whatsoever, it is also true that innovation is something bowlers should embrace, and we have seen that in practice with the excessive use of the slower ball, for example. Innovation and variations are the key to success for today’s bowlers and the sooner they realise that, the better it will be for them.”

Wahab Riaz’s next goal will be to continue putting in excellent performances for his CPL team, Barbados Tridents. This is a challenge he has accepted with enthusiasm and gusto as participation in such tournaments is something he considers crucial for any cricketer’s development, “T20 tournaments such as the Vitality T20 Blast and CPL keep me focused on, and busy with cricket. Every time I play for another team or franchise, I learn more about myself and what others are doing, and it’s also a great opportunity to make new friends. Being on the field is important to me as that experience gets me closer to doing what I live my life for, which is to play for Pakistan,” he concluded.