Speaking to Saj (for Sky Sports), Kane Williamson reflected on his time with Yorkshire, discussed the global expansion of T20 cricket and spoke about the healthy rivalry between him, Joe Root, Steve Smith and Virat Kohli. 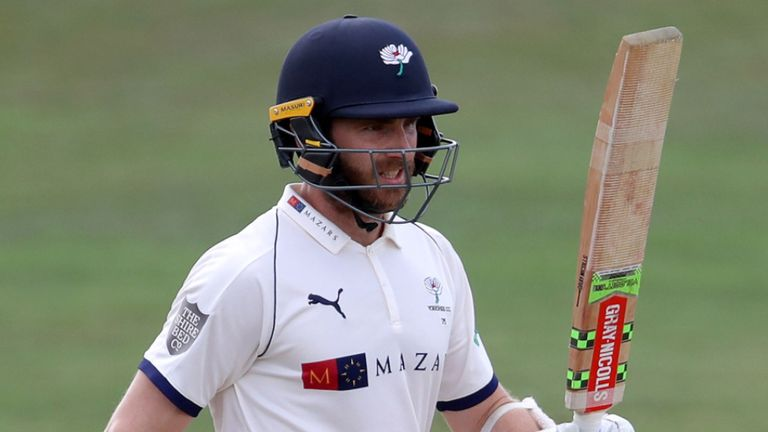 Williamson may be one of the world's top-rated batsmen but he insists that playing in England continues to present unique challenges and helps to improve his game.

Williamson's latest stint at Yorkshire ended in early September after 10 Twenty20 and three first-class matches and says it was an opportunity he couldn't turn down.

The New Zealand captain had to walk away after achieving the milestone of 10,000 first-class runs during his innings of 51 against Somerset in his final game and says he relished the challenge.

"It's tough with current international schedules and you are always weighing up playing time versus time away from the game as well," said the 28-year-old.

"However, it was good to have some time off and then come back here to play for a couple of months with a good bunch of guys with a great team culture. This is a place where there is such a great opportunity to learn and I suppose this was a chance that I could not miss."

He added: "England is a great place to come over and learn about the game. It's a different place to play cricket, especially if you consider the fact that the last place I played cricket was in India and before that it was New Zealand.

"Then, when you come over to England, the ball behaves differently as it swings a little bit more and the wickets offer a little bit more for the bowlers. All these characteristics make for a new challenge. Even though I have been to England before, the fact is that you still need to adapt to local conditions which is a huge test of your abilities."

The world of cricket's love affair with the Twenty20 format of the game has been given a new shape with the advent of various Twenty20 Leagues, headlined by the Indian Premier League, in which Sunrisers Hyderabad skipper Williamson scored over 700 runs to walk away with the Orange Cap.

"IPL is a fantastic competition which has grown so much since inception," he explained. "The passion for the sport in India is unrivalled and to have the opportunity to play for domestic sides in India in the IPL is truly special. It attracts so many players from around the world and all of them bring their own cultures to a place where there is so much love for the game. In a country like India with almost 1.3 billion people, it is no surprise that the IPL continues to go from strength to strength with more and more overseas players choosing to play in this league."

The popularity of this style of franchise-based competition is not only growing amongst the spectators but, as Williamson explained, also has a special attraction for players as well.

"It's a great experience to have the opportunity as an overseas player to play in any country with different conditions. It's a positive thing and the proof of that is that we are seeing more and more players playing in foreign leagues and I am sure they are getting a lot out of those experiences as well."

The ECB's announcement to start a 100-ball competition in 2020 has met with mixed reviews.
To many, this would be a difficult format to popularize given the wide acceptance of the existing 50-Over and Twenty20 versions of the game. In Williamson's eyes, the 100-ball format - whilst still in its planning stage - needs to be given room to develop in the same way the Twenty20 version of the game was allowed to when it was first introduced.

"It's a new concept and not much is known about it at the moment, but I guess the ECB are trying to mix things up a little bit as the Twenty20 game is already thriving as is, so only time will tell how the 100-ball game will develop," he said.

"The Twenty20 format is popular with a lot of different franchise cricket being played around the world. It is also comparable in the sense that you can perhaps compare the IPL with the Blast in England, Big Bash and other such tournaments because everything remains fairly equal in terms of the format it's played in.

"I believe that is an important thing for people to have to sink their teeth into so when they are turning on their televisions and perhaps watching an IPL game being played, they can compare it with another similar format game being played elsewhere. But I realise that Twenty20 cricket also started off as just an idea and it became so popular over time, so the ECB are also trying to do the same by organising the 100-ball game and we need to give it some time to take shape, when it is introduced."

Test cricket's status in world cricket remains nothing short of sacrosanct to some. However, crowd attendance figures around the world seem to indicate that the shorter formats of the game are more popular which points to a bleaker future for Test cricket. For a master batsman who has scored 5,338 runs in 65 Tests, the longer format of the game needs special attention to ensure that it survives in the long run.

"I would certainly like to see Test cricket protected," said Williamson. "I understand that new formats of the game do attract a lot of attention and are exciting, and Twenty20 cricket does bring people to the game. But the purists still love the longer form of the game and I am sure between both sides of the argument, there is a crossover point. Hopefully people will continue to gain interest in the game due to the popularity of the shorter format, while also appreciating the longer game for what it is. I know for a fact that all the players love playing Tests and see it as a real test of their skills."

It is no mean feat to be ranked among the top batsmen in the world which include some illustrious names of present-day cricket but for Williamson, the race to the top is more about ensuring that his team benefits and less about being better than others.

"I know Steve Smith, Joe Root and Virat Kohli fairly well and they are great guys as well as being great cricketers as well. These are cricketers that I admire.

"There is no rivalry between us as far as I am concerned and it's all about what you are trying to do for your team in trying to move your side forward. There is nothing more to it from my point of view, but it certainly makes the game enjoyable."