"The experience of playing against top teams like India and Pakistan has been amazing" : Mujeeb-ur-Rahman

Afghanistan's Mujeeb-ur-Rahman in an interview with Saj (for FirstPost Sports) speaks about the experience of playing in a high profile tournament like the Asia Cup, the benefits of taking part in the Afghanistan Premier League (APL) and describes what it was like to be a part of his country's first Test match. 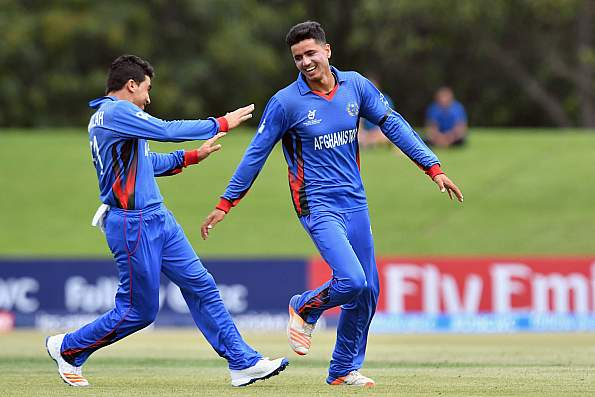 The recently-concluded Asia Cup in UAE provided a realistic confirmation, if one was ever needed, about the rising status of Afghanistan as an exciting and fast-improving limited-overs' side. In the five matches that Afghanistan played in this tournament, they were able to present stiff challenges against some of the best teams in the world, including the Champions Trophy winners Pakistan who would have counted themselves lucky to have escaped with a tense last-over victory at the Super-4 stage. To further reinforce their growing reputation as a team to be wary of, the eventual winners of the Asia Cup, India, were held to a tie by a more than competitive Afghanistan side.

Amongst the many young, enthusiastic and skillful Afghanistan cricketers who took part in the Asia Cup and ones that have been defying the odds in almost every game they have played for their country, the name of 17-year-old Mujeeb Ur Rahman stands out as a top-class performer who many consider to be a star of the future.

The right-arm off-break bowler has already established a reputation as a genuine wicket-taker and his 7 wickets in the Asia Cup seem to be further proof of his blossoming talent which, along with 31 international appearances for his country, are a good indicator of what the future holds for the Khost-born youngster.

Whilst many cricketers of his age would still be finding their way through junior domestic systems and still dreaming of playing first-class cricket or one day representing their country at the international level, Mujeeb has already played 23 ODIs and seems unfazed about this achievement.

“It’s been an enjoyable time for me so far in my career where I have played a lot of international cricket at such a young age. The experience of playing against some of the top teams in the world like India and Pakistan has been amazing and I have learned that a lot of hard work is needed to play in the international arena. I hope I can continue doing this and serve my country in the best way possible in the future,” he said.

Getting a chance to play against some of the top teams in the world would be exciting enough for a teenager like Mujeeb, but to play against the likes of some legendary players is something he will cherish forever. “I had the honour and privilege to play against some top-quality players in the Asia Cup, but I will always remember playing against MS Dhoni in front of a packed house in Dubai. Whilst it was disappointing to not get a wicket in the Super-4 clash against India, the thrill of playing against a team with someone of MS Dhoni’s class was something I will always remember.”

Whilst Afghanistan have already established themselves as a force to be reckoned with in the limited-overs formats, their recently-awarded Test status represents yet another opportunity to impress the cricketing world. In June this year in Bengaluru, the Afghans debuted in Test cricket with a historic game against India which ended in a disappointing innings defeat, but for Mujeeb, this format of cricket is yet another area where he can learn more and improve further.

“We played one Test match against India and that didn’t go too well for us, although it was a great experience to play in the long format of the game. For me, moving from white-ball to the red-ball format wasn’t that easy as I have not played this form of cricket before and I did find it tough. However, it was a great learning experience for all of us and in the future, if given the opportunity, we hope to do better in Test matches in the same way we have done in the shorter-formats of the game.”

In the run-up to the Asia Cup, Pakistan and India were widely considered to be the top two teams but Afghanistan with their sterling performances against both the tournament favourites showed that they were perfectly capable of holding their own against the very best. For Mujeeb, the pain of not being able to dethrone the top contenders in the Asia Cup was very real but it was interspersed with a genuine belief that the Afghanistan side has the capability to beat the best on any given day.

“The Asia Cup was a unique experience for us because in the past, we used to be content just with the fact that we had a chance to play against big teams such as India and Pakistan. However, this time in the Asia Cup, we went into the tournament with the feeling that we had the ability and skills to beat these two teams as well. So, our attitude during this tournament was totally different and was one of wanting to win and believing we can win and not just taking part to make up the numbers. As far as our performances in this tournament are concerned, we tried our best and got close to winning against Pakistan and India but unfortunately could not finish the job at the end, although I am sure individually and collectively, we have learned so much from those matches and we will continue to improve and do better next time we have an opportunity to meet these teams.”

The advent of the latest Twenty20 League, the Afghanistan Premier League, to share the cricket calendar with the likes of the IPL, BBL, CPL and PSL has also provided another opportunity for fans of the game to see some of the top Twenty20 stars in action and also allowed Afghanistan's blossoming talent to be showcased to the world. For Mujeeb who represented the Nangarhar Leopards in the inaugural edition of the APL, the Twenty20 tournament could not have come a day sooner for the Afghanistan players as he remarked.

“As an Afghanistan player, I cannot express in words how happy I was to take part in this first edition of the APL. With the other Afghan players, we took part in this league alongside some top overseas players so there was a lot to learn from them as well. Before the APL, our players were playing in other foreign leagues such as the IPL and CPL which was great for our experience but now we took part in our own Twenty20 league which does fill us with a lot of pride and satisfaction.”

The stated aims of most such leagues revolve around the invaluable learning that the local players are able to garner from the host of international stars. In Mujeeb’s opinion, the APL was a great opportunity to play alongside some top purveyors of Twenty20 cricket and was something which will bring great benefits for Afghanistan cricket in future.

“Apart from just seeing how such top-quality players prepare physically for each game by sharing the dressing room with them, we also got to see the mental side of their preparations as well. The manner in which they behave during games, especially under pressure situations or when the going gets tough, was a great learning experience for all of us. Of course, playing alongside such players also helps us in improving our batting, bowling and fielding skills and this sort of exposure to top players of the world will really help Afghanistan cricketers in the future.”

Whilst Mujeeb Ur Rahman was understandably overjoyed with playing in his country’s own Twenty20 tournament, it is worth mentioning that other leagues around the world are also taking note of his special talent. In Australia's Big Bash League, Mujeeb has been given a contract to represent Brisbane Heat in the next edition of the tournament. For the young off-spinner, this is simply another incredible opportunity to enhance his skills.

“I am really looking forward to playing in the BBL for Brisbane Heat as that is another top-quality team which takes part in a well-respected and high-profile league. I am sure that this will really help me grow as a cricketer and get Afghanistan cricket further on the international map. I am also hoping that my experience from playing the APL is something that will really help me do better in the BBL and I will be able to demonstrate my skills to the audiences in Australia and around the world. It's also an opportunity to be an ambassador globally for my very proud nation.”

With the world his oyster given his talents with the ball, the young Mujeeb Ur Rahman is looking forward to a long and rewarding career, but he remains cautious and is aware that competition in the world of cricket is tough and nothing much can be achieved without hard work.

“I am simply dedicated to continuing to enhance my experience by performing to the best of my abilities, the same way as Rashid Khan has done. He is a great role model for me and other Afghan cricketers. Just like him, I will continue to train hard and put in good performances and do my best to serve my country as long as I can.”