"I'm back, fully fit and feel that I am bowling with good rhythm" : Umar Gul

Pakistan pacer discussed the emergence of Shaheen Shah Afridi, Hasan Ali's dip in form and his hopes of representing a franchise in the upcoming 4th edition of PSL. 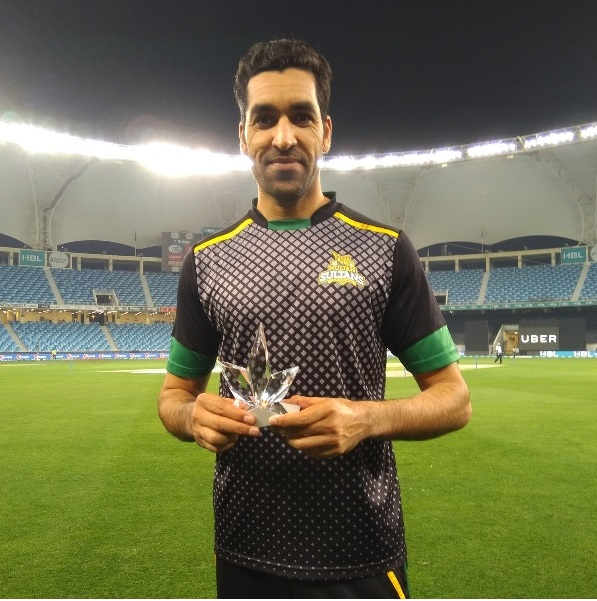 The Pakistan Super League has defied all odds since its inception in 2016 to become one of the top Twenty20 League tournaments around the world. Originally played by 5 teams, a sixth team named Multan Sultans was added for the 2018 edition which allowed another venue for many talented Pakistan players to showcase their skills.

A veteran of 237 international matches where he has taken 427 wickets, Umar Gul was picked by the newest franchise Multan Sultan to strengthen their bowling resources. Vastly experienced and capable of delivering yorkers with a high degree of accuracy, Gul was a logical choice for Multan as they went about with some zeal to stamp their authority in Pakistan’s premier Twenty20 tournament.

The fourth edition of the PSL should possibly have been another opportunity for Multan Sultans to continue with their efforts to become one of the top teams but the recent announcement by the PCB about the termination of ownership rights has left the sixth side’s future in limbo. Umar Gul, who was looking forward to his participation in the next edition of the PSL expressed his satisfaction with the PCB’s handling of the matter, as he explained in an exclusive interview with PakPassion.net.

“As a player and a professional you have to just get on with it and leave what happens regarding the sixth franchise to the Pakistan Cricket Board to sort out. The Pakistan Super League is a brand and the image of the brand is very important for the PCB and I am sure they will resolve this issue accordingly.”

The Pakistan pacer’s future at the PSL looked very settled with Multan but Gul is hoping that changes in the management of the sixth team will not adversely affect his chances, “I spoke with the owners of Multan Sultans and they had stated to me that they were going to release me ahead of the player draft for the fourth edition of the PSL, but then they had also hinted that they may re-sign me at the draft. They had looked at the players they wanted to retain, and I was not amongst that group of players, but they had been thinking of signing me again. So, let's see what happens now and what is decided by the people who will be running the 6th team at the Pakistan Super League.”

Umar Gul’s career has seen a lot of ups and downs and whilst he has always put in his best to be marked as one of Pakistan’s top performers over the years, injuries have plagued his career but to his immense credit, he remains upbeat and is looking forward to better days.

“I've been a little unlucky with injuries around a year to eighteen months ago and that meant that I couldn't play as much cricket as I had wanted to. But now I am fully over the injury problems and have been playing regularly in every format in domestic cricket. I've been captaining HBL and we have been very successful in the domestic circuit. I'm back, fully fit and feel that I am bowling with good rhythm, so I'm hopeful that I will get a chance to play in the next edition of the Pakistan Super League. The yorkers that I was famous for are back and I'm feeling good about my bowling.”

Injuries may have been part and parcel of Umar Gul’s career but one such episode played a cruel part in shortening his season in the 2018 edition of the PSL as he explained, “unfortunately, in last year's edition of the PSL I only played 2 matches due to injury. I took 6 wickets in my first match and then took 2 wickets in the other match, but a knee injury restricted my participation in the tournament which was a huge disappointment for me. The Pakistan Super League is special for all Pakistani players, whether you are an experienced former international or an up and coming youngster, we all want to be a part of it.”

The allure of participation in Twenty20 Leagues is one that takes many overseas players to all corners of the world which is great news for the organisers in terms of building reputation, but Umar Gul would like more focus on local players.

“I believe that it's important for the PSL franchises and the PCB to give priority to Pakistani players as this is a Pakistani tournament which should be for the benefit of Pakistani players and Pakistan cricket. In tournaments around the world priority is given to the local players and this has to be the case at the PSL too. It's absolutely vital that criteria are set for each franchise to ensure that young players are given every opportunity to showcase their talent at tournaments such as the PSL.”

At 34 years of age, Umar Gul feels that he has plenty to offer to any side based on his experience which has seen him play a key role in many Pakistan victories as well as lead his team HBL to some memorable triumphs. This is one quality that any PSL side would be well advised to use for their benefit.

“The best teams in any format need a combination of youth and experience and I still believe that I have a lot to offer, particularly in tournaments such as the PSL. The combination has to be right and to be successful in tournaments like the PSL you need a blend of youngsters, experienced players and overseas players who are team players. This is also what we are trying to achieve in domestic cricket at HBL where we are encouraging our younger players to be given game-time and for them to learn from the experienced guys. We have three or four Under 19 players in our squad and they are all getting opportunities in domestic cricket this season and I believe this is so vital for the development of these youngsters and who knows, these boys might be playing for Pakistan one day.”

The emergence of Pakistan’s brightest and newest fast-bowling talent in the shape of Shaheen Shah Afridi has caused a ripple of excitement amongst fans and experts alike. The 18-year-old pacer has impressed all with his express pace and control and won himself an important fan in Umar Gul.

“It's very heartening to see a young cricketer like Shaheen Shah Afridi doing so well for Pakistan. This is only because he has been given this opportunity at a young age and has been identified quickly as a young man who has the credentials to play international cricket and he deserves this chance. He came through at FATA where the facilities are not great, and he is a cricketer who is a very quick learner. He has lots to learn and to work on, but from what we are seeing he is a fabulous talent and I wish him all the best for the future. The more he plays, the more he will learn and the better he will get. He's a special bowler who I believe has a great future ahead of him.”

Marked as one to watch for the future and crowned as ICC’s Emerging Player of the year in 2017, Hasan Ali’s performances since those heady days of the Champions Trophy win has been a source of concern for many observers. In Umar Gul’s view, however, there is little to worry about as Hasan’s innate talent will shine through despite some temporary setbacks.

“I'm not too worried about Hassan Ali's current form as all bowlers go through ups and downs in their career. Sometimes a loss of form can be down to fatigue and too much cricket and mentally and physically you become tired due to playing continuously. I'm not overly concerned about Hassan as I believe he is a very capable bowler. What can happen is that when you are new to international cricket opposition teams do not know too much about you and you have that surprise element, but after a while the opposition become familiar with your bowling and that can cause issues as they are then wary of your strengths and weaknesses as a bowler. Then as a bowler you need to come up with some different plans and some new ideas and that is probably what Hassan will have to do.”

Pakistan's fabulous T20I record in recent times has seen them safely placed at the top position in ICC’s T20I rankings but their less than ideal progress in the ODI arena has left many of their supporters scratching their heads. To Umar Gul, the explanation for this difference in fortunes is simply due to the players’ preference for the shorter and more lucrative format and the PCB needs to take some serious steps to fix the situation.

“Too many of our players are only focusing on Twenty20 cricket and that is causing problems for the Pakistan ODI team. They are keen on playing in Twenty20 tournaments in Pakistan but are reluctant to take part in the longer format tournaments, whether that be 50-over or 4-day competitions. The Pakistan Cricket Board needs to give more priority to 50-over and four-day cricket instead of this continued emphasis on Twenty20 domestic competitions. The scheduling is such that so many of our national players and players playing for Pakistan A mainly play in twenty over domestic tournaments and that as far as I am concerned is not healthy for our batsmen or for Pakistan cricket. Our batsmen are losing sight of how to build innings and how to bat for long periods.”

The lack of talent in the batsmen at the disposal of Pakistan’s ODI teams have been a matter of great debate in recent times but as Umar Gul explained, the interest in T20 format is responsible for causing an unhealthy decline in the quality of batting available to Pakistan and needs to be remedied with concrete measures before it’s too late, “batsmen are playing with technical issues that are not highlighted in the 20 over format but are shown up in 50-over and 4-day tournaments. Batsmen improve by spending time at the crease and by having the ability of playing long innings, not by hitting a few shots and then walking back to the pavilion. The best batsman have the ability to play well in all three formats and convert their skills from 4-day cricket down to twenty-over tournaments. If you are technically good then you can succeed in every format, but what we are now producing in Pakistan are a lot of batsmen who have the skills for twenty over cricket but not for fifty over or Test cricket. We are producing batsmen who can hit a few fours and sixes but struggle to build innings and hit shots through gaps and rotate the strike and this needs to be looked at with all seriousness before it's too late."